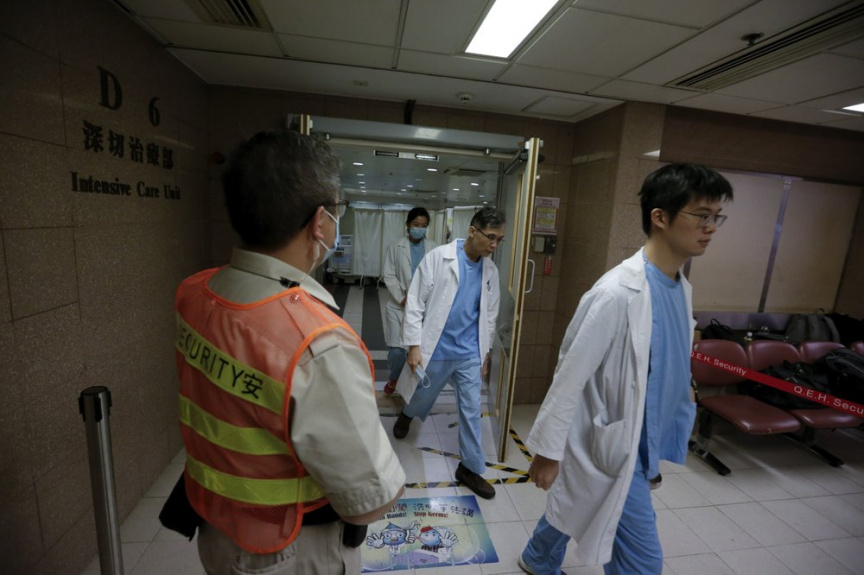 Hospital staff walk out from the ICU ward where a university student who critically injured during a protest, is treated at Queen Elizabeth Hospital in Hong Kong, Friday, Nov. 8, 2019. A hospital official says the 22-year-old Hong Kong university student who fell off a carpark building after police fired tear gas during clashes with anti-government protesters has died. (AP Photo/Dita Alangkara)

HONG KONG (AP) — A Hong Kong university student who fell off a parking garage after police fired tear gas during clashes with anti-government protesters died Friday, in a rare fatality after five months of unrest that is expected to intensify anger in the semi-autonomous Chinese territory.

A hospital official, identified only as Chow, said the 22-year-old died Friday morning, but couldn’t give further details.

Although the cause of his fall has not been determined, his death is bound to deepen anger among youths against police, who have been accused of heavy-handed tactics since protests demanding democratic reforms started in June.

Local media reported that Chow Tsz-Lok has been in a coma with brain injury since he was found early Monday sprawled in a pool of blood on the second floor of the building. Police believed he plunged from an upper floor but it wasn’t captured by security cameras.

Minutes earlier, television footage showed riot police firing tear gas at the building after objects were hurled down at the officers in the street when they chased off a mob. Police didn’t rule out the possibility he was fleeing from tear gas but noted officials fired from a distance. Police also denied claims that officials pushed the victim down and had delayed emergency services.

There have been only few fatalities amid the unrest, with previous reports of deaths by suicide and a man who fell to his death while hanging pro-democracy banners on a building.

At the University of Science and Technology, Chow’s colleagues staged rallies this week and on Thursday disrupted a graduation ceremony. The university president dabbed away tears as he announced Chow’s death Friday on the second day of the convocation, with the audience standing to observe a moment of silence.

Calls emerged online for memorial events Friday to mourn Chow in multiple locations including at the garage in the suburb where he fell.

The protests were sparked by a now-shelved extradition bill to mainland China that many sees as Beijing’s creeping interference on legal and other rights guaranteed to Hong Kong when the former British colony returned under Chinese rule in 1997.

The movement has since expanded to include other demands, including direct elections for the city’s leaders and an independent investigation into alleged police brutality.

Mini Mercury skips across the sun in rare transit