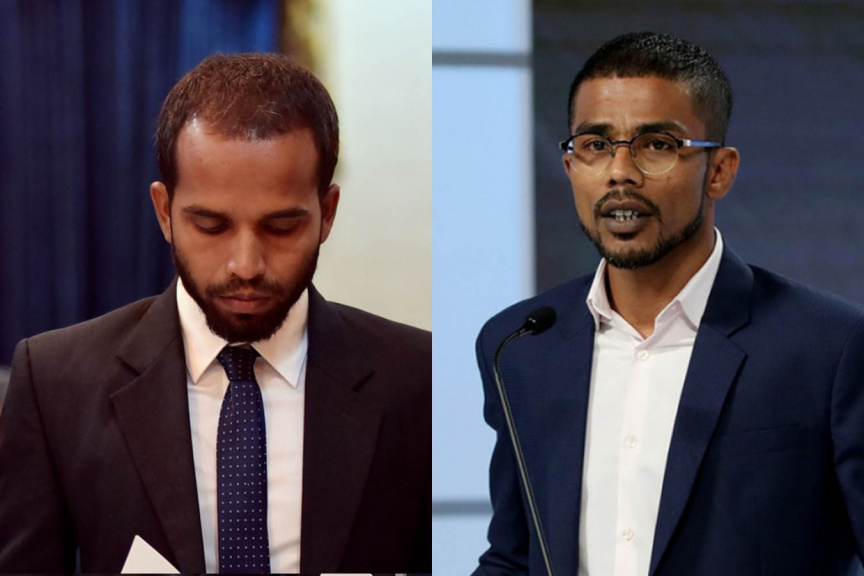 Criminal Court senior judge Ahmed Hailam (L) received a payment described as a loan by Alhan Fahmy (R) on May 19, 2019. The transfer is under investigation by the Judicial Service Commission which had suspended Judge Hailam on November 5, 2019.

Former MP for Feydhoo Alhan Fahmy has defended the bank transfer that took between him and the now-suspended Criminal Court senior judge Ahmed Hailam.

Alhan described the transfer of MVR 200,000 that recently came to light as a favor to a childhood friend. The transaction that saw Judge Hailam receive a payment of MVR 200,000 from Alhan Fahmy on May 19, is now under investigation by the Judicial Service Commission after it was brought to the Commission’s attention by Police.

When contacted by “Sun” regarding the payment, former MP Alhan said that Judge Hailam was a childhood friend and admitted that he had transferred the money through internet banking as a loan to Judge Hailam.

“Hailam has explained this to Police when questioned. He informed them that the money was a loan borrowed from me,” said Alhan who lost his bid to win the parliamentary seat for North Henveiru during the last parliamentary election.

Alhan defended the payment by stating that it was not intended to influence Judge Hailam in any manner and stated that Judge Hailam was not presiding over any cases that had his (Alhan’s) interests at stake. Alhan asserted that there was no reason why he couldn’t loan Judge Hailam the money, since this was the case.

Alhan then questioned why the transaction was brought up on the day of President Yameen’s sentencing hearing and alleged that it was done to influence or threaten the judge and pointed out that the bank transfer took place months ago and was clarified by the relevant authorities.

Judge Hailam was suspended earlier this week due to a cartoon he posted in a recreational Viber group of the Criminal Court that depicted the current President Ibrahim Mohamed Solih and former President and current Speaker of the Parliament Mohamed Nasheed chained up along with the main instigators of the failed coup of 1988 that claimed the lives of several Maldivians.

The cartoon was posted as a Victory Day greeting by the Judge who later apologised for the cartoon and claimed that he did not realise that the cartoon depicted President Solih and Speaker Nasheed.