Flags mounted at Victory Memorial in remembrance of fallen heroes 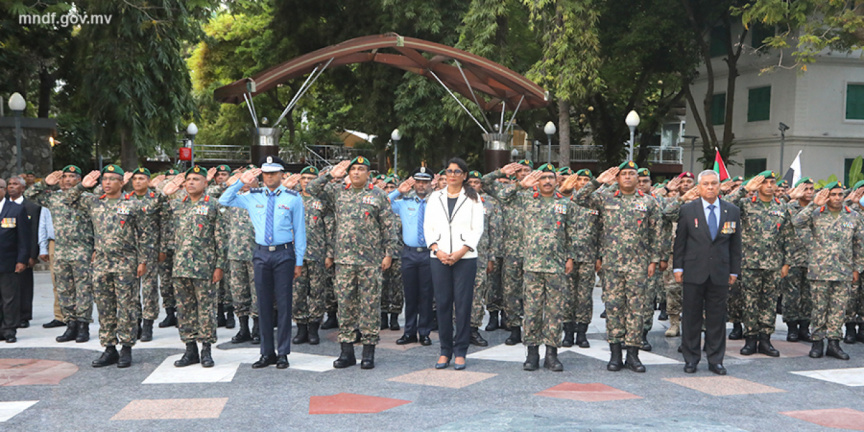 A flag mounting and guarding ceremony had been held at the Victory Memorial in remembrance of the heroes who sacrificed their lives for the nation in the foiled coup plot of November 3, 1988.

The successful defeat of the coup plot of 1988 is marked in Maldives on every November 3 as Victory Day.

The ceremony at the Victory Memorial this Sunday morning was headed by Defense Minister Mariya Ahmed Didi, along with Chief of Defense Force Abdulla Shamaal and Commissioner of Police Mohamed Hameed (MC Hameed).

Others in attendance at the ceremony included general officers, honored retirees, senior officers, and other ranking officers of the MNDF.

The flag mounting was followed by a seven-gun salute and a moment of silence in remembrance of fallen national heroes.

MNDF officers in all area commands, prior to the flag mounting ceremony, gathered to attend the Fajr prayers. Officers from the MNDF Central Area Command had attended the Fajr prayer at the Islamic Center in Male’.

The officers recited a special prayer following the Fajr prayer.

The coup attempt of 1988 to overthrow then-President Maumoon Abdul Gayoom’s administration marked one of the bloodiest days in Maldivian history. The coup was staged by Abdulla Luthfee and Sagar Ahmed Nasir – who hired armed mercenaries from the Tamil secessionist organization, People's Liberation Organization of Tamil Eelam (PLOTE).

The ensuing bloodbath cost the lives of 19 Maldivian citizens; 11 civilians and eight soldiers.

Sagar Ibrahim Nasir is currently free after having completed serving his sentence, along with several others involved in the plot.

Meanwhile, Abdulla Luthfee – considered to be the mastermind behind the plot - went on the run after he was granted medical furlough to travel to Sri Lanka on January 16, 2010. He continued to live in hiding in Sri Lanka for nearly a decade before he surrendered to Maldivian embassy officials in Colombo on May 1 amid security sweeps in the country following the Easter bombings.

He was extradited to Maldives on July 9.

The police have requested the Prosecutor General’s Office for charges against Luthfee for evading the authorities.