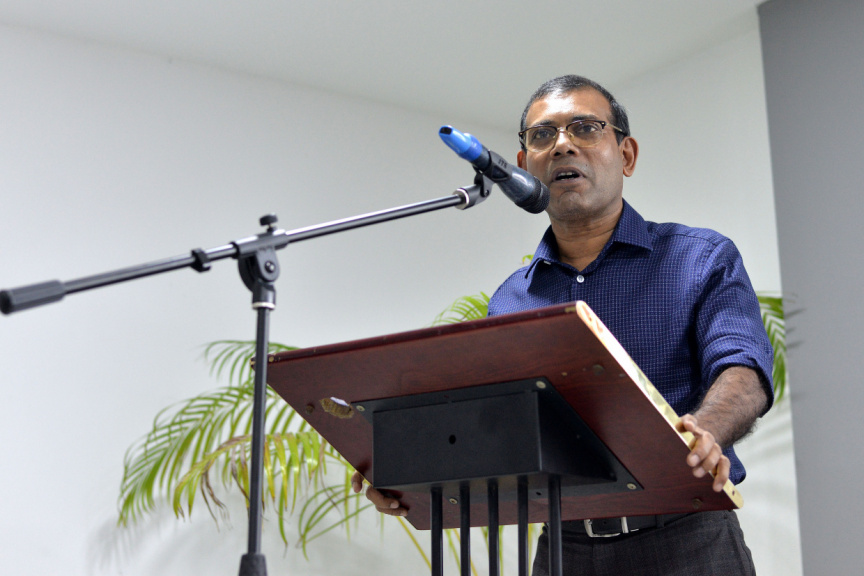 Speaker of Parliament and former Maldivian President Mohamed Nasheed speaks at the unveiling of the 10th edition of Sheikh Hussain Rasheed Ahmed’s book ‘The Dhivehi Translation and Interpretation of Sahih Muslim’ held at Iskandhar School on October 9, 2019. (Sun Photo/Fayaz Moosa)

Speaker of Parliament and former Maldivian President Mohamed Nasheed says he does not believe Maldives Democracy Network (MDN) had released its 2016 report titled ‘Preliminary Assessment on Radicalization in Maldives’ with the deliberate intention of weakening the country’s Islamic faith and creating religious hatred and division.

He made the comment in his speech at unveiling of the 10th edition of Sheikh Hussain Rasheed Ahmed’s book ‘The Dhivehi Translation and Interpretation of Sahih Muslim’ held at Iskandhar School last Wednesday night.

Nasheed said that he had personally reviewed the controversial report, and that while some of the wordings used in the report were objectionable and downright wrong, he did not believe the report was released with a sinister objective.

He said that the objectionable wording on the report had been something “which just happened” in MDN’s attempt to compile such a report in the English language.

He said that such an outcome was possible when attempting to compile such a report without sufficient awareness of such sensitive matters.

“I don’t, for one instance, believe there was any intent from either any of our children, or I believe – those who wrote the report - to make any among us turn away in hatred of Islam or to weaken [our faith]. I, when I read the report, did not find anything to make me believe the wordings were used with that intent. It something which just happened in trying to write it in English. It happens, when university graduates attempt to write a report of such a sensitive subject without first familiarizing one’s self with the local culture, the pieces of literature released by local scholars, the literature released by scholars from other countries regarding Islam and other such matters. I believe it’s possible in such circumstances,” said Nasheed.

While MDN is currently under criminal investigation by the police over its report, the Parliament debated on an emergency motion on countering blasphemy in direct response to the report this week.

The emergency motion sparked a heated debate within the Parliament with all lawmakers voicing condemnation of the segments of the report which mock the Islamic faith, the Holy Quran and the Prophet. Many called for strict action against the NGO.

Nasheed said that he found some of MDN’s assessments to be credible. One of which was its findings regarding the systematic recruitment and radicalization of young men who are sent to engage in militant activities in foreign countries, and die there.

“Certainly in my lifetime, only the martyrs of November 3 [1988] had sacrificed their lives in defense of Maldives, and in defense of Islam,” said Nasheed, dismissing the claim that the young men who died in militant activities abroad were martyrs themselves.

“The MDP report which is causing such a worry addresses these issues. The report was compiled to find a remedy to these issues. We all agree on the existence of these issues,” said Nasheed.

He said that the people who go to war in the name of Jihad and die, have had a lot of things which have happened from their childhood onwards which led them to their decision.

“MDN’s report focuses of these socio-cultural issues. These issues and the exploitation of Islam for recruitment to militant activities,” said Nasheed.

He said that the assessment of the subject which MDN attempted required assistance of professionals, and more in-depth research.

He said that while he did not believe MDN to have released its report with the intention of inciting religious division in Maldives, he acknowledged the existence of a minority in Maldives who are opposed to, and are actively working against the spread of Islamic faith in Maldives.

“We all acknowledge and accept this. And we identify it as another form of extremism and treat it as such,” said Nasheed.

He said that all any Maldivian wanted was to life in peace in their own land, and that the way to that life was Islam.

He added that the path to realizing ruling MDP’s legislative agenda, Agenda 19, as well as the ‘clean and simple lifestyle’ it promotes lay in adopting the core principles of Islam.

Nasheed said he had invited officials from Islamic Ministry, Home Ministry, Education Ministry and MDN to sit down for talks at the Parliament to peacefully resolve the issue.

“I want us, with input from religious scholars and other experts, to determine the moderate policy we need to adopt in order to bring peace to this country. And I want us to adopt it,” said Nasheed.