‘Big Bang Theory’ gets shout out to Nobel Prize announcement 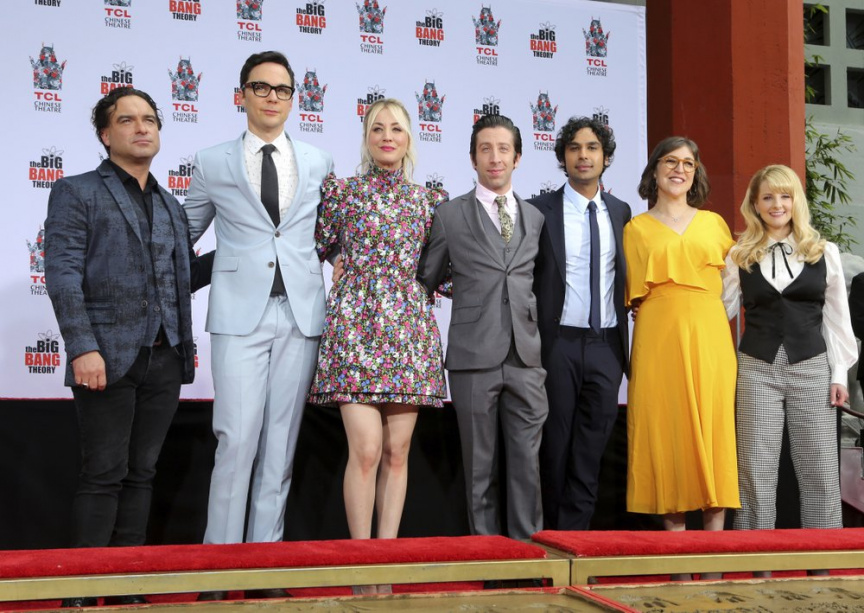 FILE - In this May 1, 2019, file photo, Johnny Galecki, from left, Jim Parsons, Kaley Cuoco, Simon Helberg, Kunal Nayyar, Mayim Bialik and Melissa Rauch, cast members of the TV series "The Big Bang Theory," pose at a hand and footprint ceremony at the TCL Chinese Theatre in Los Angeles. "The Big Bang Theory" made its way into the annals of the Nobel Prizes in real life. The announcement, Oct. 8, 2019, that a trio of scientists had won the physics Nobel started off with an unlikely reference: the opening lines of "The Big Bang Theory." (Photo by Willy Sanjuan/Invision/AP, File)

STOCKHOLM (AP) — Life imitated art Tuesday when “The Big Bang Theory” — the American TV sitcom, not the scientific explanation for how the universe began — entered the annals of Nobel Prize history.

The announcement of the winners of this year’s Nobel in physics began with a nod to an unlikely cultural reference: the opening lyrics to the show’s theme song. “The Big Bang Theory” had its finale in May. In the episode, two of the main characters, Sheldon and Amy, win the physics prize.

“Our whole universe was in a hot, dense state, then nearly 14 billion years ago expansion started,” academy member Ulf Danielsson said, quoting “The Big Bang” theme at the presentation in Stockholm.

A Canadian-American scientist and two Swiss scientists won the physics prize for their work in understanding how the universe has evolved from the Big Bang and the blockbuster discovery of a planet outside our solar system.

Goran Hansson, secretary general of the Royal Swedish Academy of Sciences, said the TV show was a “fantastic achievement” that brought the “world of science to laptops and living rooms around the world.” Referencing its theme song therefore seemed fitting, he said.

“The Big Bang Theory” debuted in 2007 and overcame early doubts to become a cult classic. The show featured a crew of nerdy misfits, all scientists on the West coast of the United States.

The plot of the finale episode has the group taking a final trip together to support the married Sheldon (Jim Parsons) and Amy (Mayim Bialik) after they win the Nobel Prize in physics. The couple waits anxiously by the phone getting prank calls from their friends before receiving the actual decision.

Hansson said he hoped fans of the show liked how this year’s Nobel Prizes are handled.

“I hope that Sheldon and Amy are not too disappointed today,” he said.