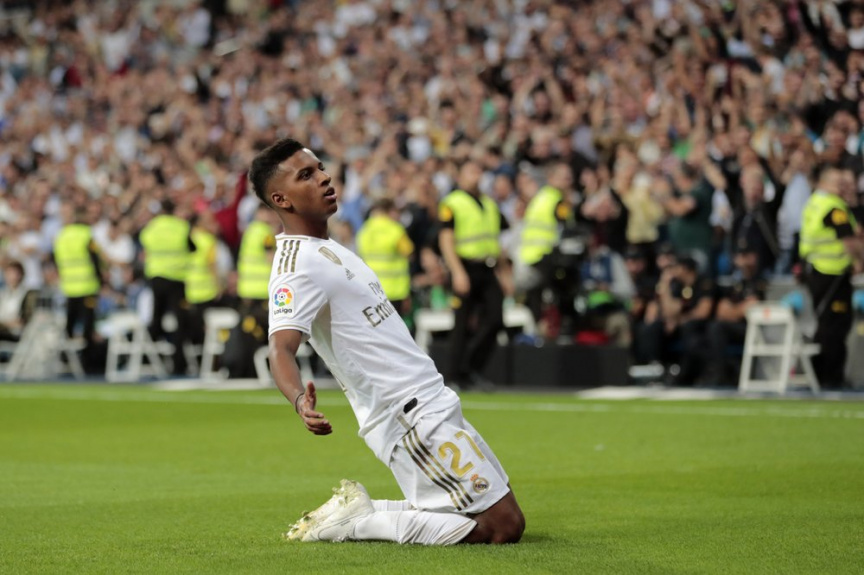 MADRID (AP) — Real Madrid’s Brazilian teenagers came through on Wednesday, taking the team to the top of the Spanish league.

Vinícius Júnior and Rodrygo scored a goal each for Madrid as it defeated promoted Osasuna 2-0 at the Santiago Bernabéu Stadium.

Vinícius Júnior scored his first goal of the season in the first half and Rodrygo marked his first-team debut by scoring moments after coming off the bench in the second half.

“I’m happy for them,” Real Madrid coach Zinedine Zidane said. “Sometimes we forget that they are still teenagers. You could see how they got emotional after scoring at the Bernabéu.”

The victory put Madrid in first place with 14 points from six matches. It has one point more than second-place Atlético Madrid, which won 2-0 at Mallorca earlier Wednesday with goals by Diego Costa and João Félix.

Athletic Bilbao, the only other unbeaten team along with Real Madrid, missed a chance to stay at the top after being held to a 1-1 draw at last-place Leganés. It trails Madrid by two points.

Madrid played without some of its regular starters against Osasuna to rest them for Saturday’s city derby against Atlético.

The 19-year-old Vinícius Júnior ended his scoring drought with a right-footed shot from outside the area in the 36th minute, and the 18-year-old Rodrygo found the net shortly after replacing his countryman in the 71st, making a nice run down the left flank before clearing a defender and sending a low shot past the goalkeeper.

“I always dreamed about this moment,” Rodrygo said. “I’m out of words.”

Spanish media said Rodrygo became the fastest player to score in his Spanish league debut, with his goal coming 95 seconds after he entered the match.

“We are very happy that the club signed these two players,” Real Madrid forward Lucas Vazquez said. “They will only keep improving with time. They have the potential to be great players.”

Luka Jovic, the 21-year-old Serbian striker signed in the offseason, thought he had scored his first goal with Madrid in the 56th, but it was eventually disallowed after video review determined he was offside.

It was the first league loss of the season for Osasuna, which dropped to 12th place in the 20-team standings.

Atlético ended a three-game winless streak with its win over Mallorca.

Diego Simeone’s team had drawn its last two matches, against Celta Vigo in the league and Juventus in the Champions League, both at home. It lost at Real Sociedad in its previous league match.

Atlético played with 10 men from the 77th minute as striker Álvaro Morata was sent off following an altercation with an opponent less than 10 minutes after he had replaced Costa.

Costa, who missed the beginning of the season because of an injury, opened the scoring with a firm header in the 26th. Félix added to the lead in the 64th after his shot from inside the area deflected on a defender and went over the Mallorca goalkeeper. It was the second goal of the season for Félix, the 19-year-old Portugal forward who joined from Benfica in the offseason.

Japanese teenager Takefusa Kubo, playing for Mallorca on a loan from Real Madrid, nearly scored for the hosts with a second-half shot that hit the post.

Mallorca, in 17th place with four points, has lost two in a row and hasn’t won since the opener against second-to-last-place Eibar.

Athletic Bilbao took the lead at Leganés with a penalty converted by Raul Garcia in the 59th, but Óscar Rodríguez equalized two minutes later with a well-placed free kick.

The result kept Athletic as one of the three teams without a loss, along with Real Madrid and Osasuna. Leganés is yet to win after six matches and has only two points from six matches.

Valencia squandered a two-goal lead in a 3-3 home draw against Getafe, extending its winless streak in the league to three matches.

The visitors took the lead in the first minute but Valencia rallied with three unanswered goals to take a 3-1 lead into halftime before Getafe equalized with goals in the 66tha and 69th.