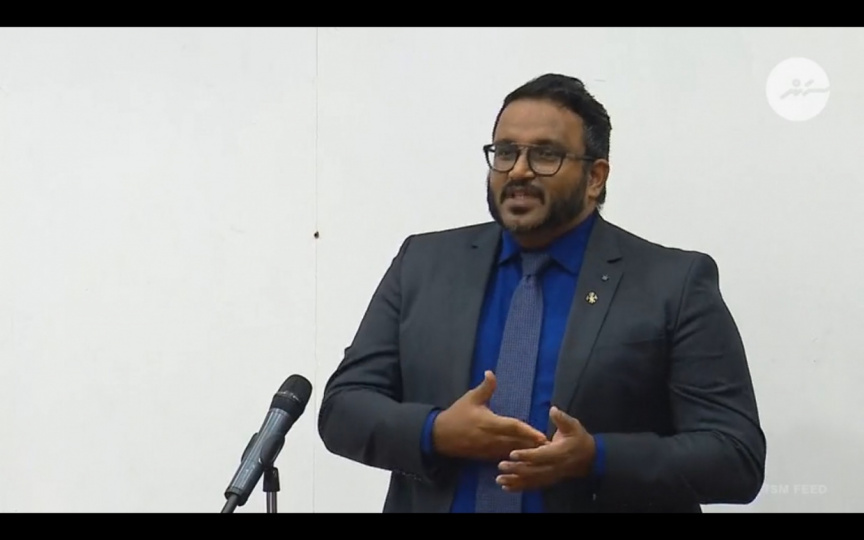 Former Vice President Ahmed Adeeb Abdul Gafoor faces a three-month prison sentence after pleading guilty to fleeing the country in violation of a travel ban imposed on him.

Adeeb had fled Maldives on tugboat Virgo 9 disguised as a crew member on July 27, but was intercepted by Indian authorities at the Tuticorin Port on August 1. He was expelled from India, and was brought back to Maldives on August 4.

The former VP was charged with obstruction of law enforcement for the violation, and appeared at the Criminal Court for the first hearing in the case this Tuesday morning.

Speaking at this Tuesday’s hearing, Public Prosecutor Ahmed Naufal clarified that Adeeb was being tried under clauses (a) and (c) of Article 533 of the Penal Code.

Adeeb had already confessed his guilt at his remand hearing on August 4. He said that he has been forced to flee due to the threats against his life, and provided assurance he wouldn’t make another attempt to flee the country.

Speaking at this Tuesday’s hearing, Adeeb said he didn’t deny the charge against him, but asked that the judge consider his health condition during ruling.

He presented his medical records to the judge and the prosecution at the hearing.

Presiding judge, Judge Ismail Ali announced that he intended to hold a sentencing hearing in five days in order to deliver a speedy ruling as Adeeb had pled guilty to the charge.

The travel ban which Adeeb violated had been imposed on him by the Supreme Court after the State filed an appeal over his acquittal for embezzling USD 5 million paid by Kuredu Holdings to Maldives Marketing and Public Relations Corporation (MMPRC) as acquisition cost for Lh. Maabinhuraa.

Adeeb was originally ordered to jail pending the outcome of the appeal proceedings, but is currently under house arrest at instructions of his doctor.

He is under surveillance by police and has been made to wear an electronic ankle bracelet.