Noise but no breakthrough as Johnson, Juncker talk Brexit 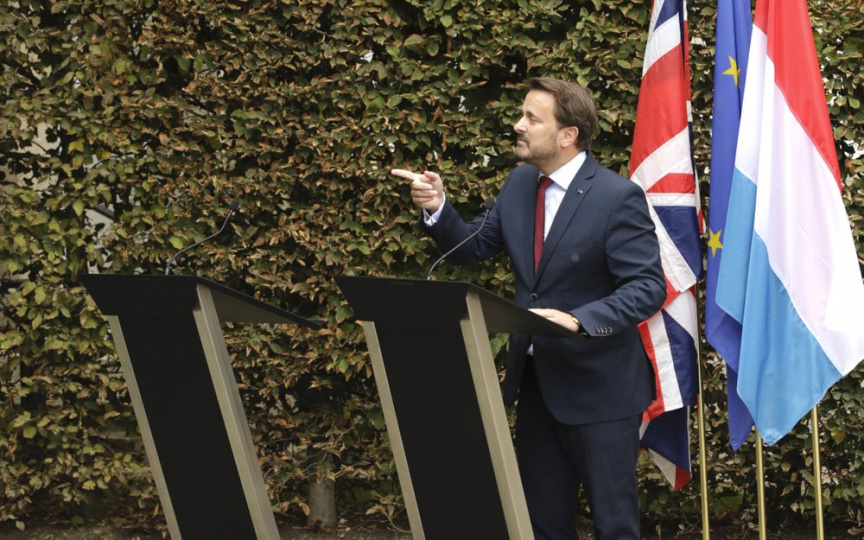 LUXEMBOURG (AP) — Boris Johnson was booed by protesters and berated by Luxembourg’s leader on a visit to the tiny nation Monday for his first face-to-face talks with the European Union chief about securing an elusive Brexit deal.

On a day of commotion and conflicting signals, Johnson pulled out of a news conference because of noisy anti-Brexit demonstrators, leaving Luxembourg’s prime minister standing alone next to an empty lectern as he addressed the media.

Still, Johnson insisted there was a strong possibility of securing a divorce agreement before Britain is due to leave the 28-nation bloc in just over six weeks.

“Yes there is a good chance of a deal. Yes, I can see the shape of it,” Johnson asserted at a separate appearance before reporters at the British ambassador’s residence.

With the Brexit deadline just 45 days away, the European Commission said the first in-person meeting between Johnson and European Commission chief Jean-Claude Juncker ended with no breakthrough in the impasse over how Britain can leave the EU with a plan in place to manage the divorce.

Britain had yet to offer any “legally operational” solutions to the problem of keeping goods and people flowing freely across the Irish border, the main roadblock to a deal, it said in a statement.

“Such proposals have not yet been made,” the Commission said, adding that officials “will remain available to work 24/7.”

Johnson insists the U.K. will leave the EU on the scheduled date of Oct. 31 with or without a Brexit deal. He hopes to strike a revised agreement with the bloc at an EU summit on Oct. 17-18, in time for an orderly departure. The agreement made by his predecessor, Theresa May, was rejected three times by Britain’s Parliament, prompting her to resign.

Opponents fear Johnson — who helped lead the 2016 referendum campaign that ended in a vote to leave the EU — is heading full-speed toward a disruptive no-deal Brexit.

Many EU leaders suspect the same thing, and mistrust the brash British leader’s populist rhetoric. Johnson has vowed to complete Brexit “do or die,” and has compared himself and the U.K. to angry green superhero the Incredible Hulk, telling the Mail on Sunday newspaper: “The madder Hulk gets, the stronger Hulk gets, and he always escapes ... and that is the case for this country.”

“We need more than just words,” he said. “We need a legally operable text to work on as soon as possible.”

The key sticking point to a Brexit deal is the so-called “backstop,” an insurance policy in May’s agreement intended to guarantee an open border between EU member Ireland and the U.K.’s Northern Ireland. That is vital both to the local economy and to Northern Ireland’s peace process.

British Brexit supporters oppose the backstop because it keeps the U.K. bound to EU trade rules, limiting its ability to forge new free trade agreements around the world after Brexit.

Britain has suggested the backstop could be replaced by “alternative arrangements” — a mix of technology to replace border checks and a common area for agricultural products and animals covering the whole island of Ireland.

A small but noisy crowd of anti-Brexit protesters booed and shouted “shame on Boris!” as Johnson arrived after lunch for a meeting with Luxembourg prime minister Bettel.

Johnson pulled out of a planned outdoor news conference, saying later that the pair would have been drowned out. Instead Bettel addressed reporters alone, next to an empty lectern, while Johnson issued his statement outside the British ambassador’s nearby residence.

“Now it’s on Mr. Johnson,” he added, gesturing at the empty lectern in front of a Union Jack.

Despite the EU’s frustration at the lack of detail, Juncker and Johnson agreed to ramp up the pace of talks, with EU chief negotiator Michel Barnier and U.K. Brexit Secretary Steve Barclay getting involved.

“Over the last couple of weeks there’s been a lot of work — papers have been shared — but we are now in the stage where we have to start really accelerating the work,” Johnson said. “That was the agreement today.”

Monday’s meeting kicked off a tumultuous week for Johnson.

On Tuesday, Britain’s Supreme Court will consider whether Johnson’s decision to suspend the British Parliament for five weeks was lawful, after conflicting judgments in lower courts.

Johnson sent British lawmakers home until Oct. 14, a drastic move that gives him a respite from rebellious lawmakers determined to thwart his Brexit plan.

Last week, Scotland’s highest civil court ruled the move illegal because it had the intention of stymieing Parliament. The High Court in London, however, said it was not a matter for the courts.

If the Supreme Court overturns the suspension, lawmakers could be called back to Parliament as early as next week.

Many lawmakers fear a no-deal Brexit would be economically devastating, and are determined to stop the U.K. from crashing out of the bloc on Oct. 31.

Just before the suspension, Parliament passed a law ordering the government to seek a three-month delay to Brexit if no agreement has been reached by late October.

Johnson reiterated Monday that he will not seek a delay under any circumstances, though it’s not clear how he can avoid it.

“I will uphold the constitution, I will obey the law but we will come out on October 31st,” Johnson told the BBC.

Elite UK schools in spotlight over claims of rape