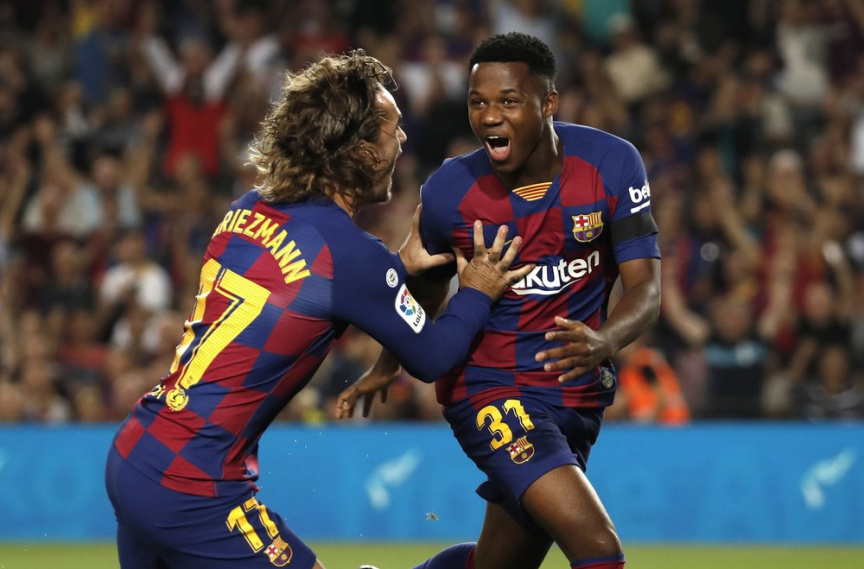 BARCELONA, Spain (AP) — Injuries to Lionel Messi and Barcelona’s other top attacking players gave an unknown 16-year-old teenager from Guinea-Bissau the rarest of chances to bring a stunned Camp Nou crowd to its feet on Saturday.

Ansu Fati became the youngest player to score in Barcelona’s stadium at the age of 16 years, 318 days when he made his first start for the defending champion, which was without Messi for a fourth game this season.

After his second-minute opener he also set up a quick second goal to further impress and put the hosts on their way to a 5-2 rout of Valencia.

Luis Suárez, who hadn’t played in a month due to injury, netted Barcelona’s fourth and fifth goals after replacing Fati with half an hour remaining.

Fati received a huge round of applause when he left and the fans chanted his name.

Fati, officially a player on its third team for 16-18 year olds, made his debut on Aug. 25 in Barcelona’s second Spanish league match. He established a milestone in his second match as the youngest player to score in la Liga in the club’s history at the age of 16 years, 304 days in a 2-2 draw at Osasuna.

Fati needed only two minutes on Saturday to write his name into the club’s history a second time.

With his second touch of the ball, he rifled in a pass from Frenkie de Jong who found him arriving to the center of the area after a dummy run by Antoine Griezmann.

″(Fati) is a player that has something special,” Barcelona coach Ernesto Valverde said. “He is a striker who is mature beyond his years. He trains like he plays. Today was a bit exaggerated, with him scoring and setting up a goal with his first touches. But we have to give him time.

“He is still growing up and has to handle a situation which is far from normal.”

His performances have also caught the eye of the Spanish football federation, which runs its national selections for La Roja and youth squads.

Spain coach Robert Moreno said the federation was already “working” to see if they can call up Fati.

The youngster hid his huge smile behind his hands while his teammates rushed in to tap him on the head in celebration of his goal.

He returned the assist to De Jong five minutes later after he sped down the left flank, used a change of foot to juke past Ezequiel Garay, and placed a perfect pass back for the Netherlands midfielder to score.

Fati provided more thrills with two shots from long range that barely missed, and for an audacious flip of the ball over the head of a defender.

Valencia patiently waited for its moments to counterattack.

Kevin Gameiro pulled one back in the 27th after Rodrigo Moreno slipped him a through ball that he put in off the post. A video review overruled an offsides call and allowed the goal.

The second half was all Barcelona’s.

Gerard Pique restored the two-goal advantage in the 51st when he finished off a shot by Griezmann that goalie Jasper Cillessen, who joined Valencia this year from Barcelona, let slip under him and hit the post. Pique rushed in and tapped it over the line.

Suárez scored just seconds after going on with a shot that went in off the upright. He added another before Maxi Gómez got Valencia’s second.

Nelson Semedo also hit the post for Barcelona and only saves by Cillessen prevented Valencia from a bigger loss.

Messi injured his leg before the start of the season. Ousmane Demble is also out hurt.

Barcelona, which had won only once in the first three rounds, moved into fourth place and to within two points of leader Atlético Madrid, which lost at Real Sociedad 2-0.

Valencia was playing its first match after the club fired coach Marcelino García Toral and replaced him with Albert Celades on Wednesday.

Marcelino was adored by his players and fans after lead Valencia to the Copa del Rey title by beating Barcelona in last season’s final. The team also earned a Champions League berth. But owner Peter Lim let him go after Marcelino criticized the club’s inability to bring in more players in the offseason.

“We can’t hide all that has happened these days and the trauma that it has been for some people, but we can only look forward,” Celades said.

Valencia visits Chelsea in the Champions League on Tuesday, while Barcelona visits Borussia Dortmund in their European openers.

A moment of silence was held before kickoff for the death of the daughter of former Barcelona and Spain coach Luis Enrique.