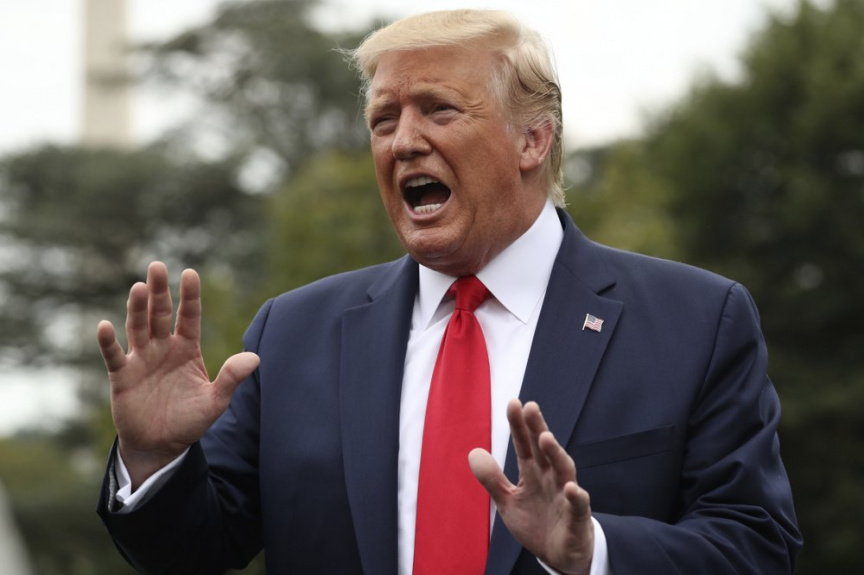 President Donald Trump speaks to members of the media on the South Lawn of the White House in Washington, Monday, Sept. 9, 2019, before boarding Marine One for a short trip to Andrews Air Force Base, Md., and then on to North Carolina. (AP Photo/Andrew Harnik)

Trump’s remark to reporters at the White House suggested he sees no point in resuming a nearly yearlong effort to reach a political settlement with the Taliban, whose protection of al-Qaida extremists in Afghanistan prompted the U.S. to invade after the 9/11 attacks.

It’s unclear whether Trump will go ahead with planned U.S. troop cuts and how the collapse of his talks will play out in deeply divided Afghanistan.

Trump said his administration is “looking at” whether to proceed with troop reductions that had been one element of the preliminary deal with the Taliban struck by presidential envoy Zalmay Khalilzad.

“We’d like to get out, but we’ll get out at the right time,” Trump said.

What had seemed like a potential deal to end America’s longest war unraveled, with Trump and the Taliban blaming each other for the collapse of nearly a year of U.S.-Taliban negotiations in Doha, Qatar.

The insurgents are now promising more bloodshed, and American advocates of withdrawing from the battlefield questioned on Monday whether Trump’s decision to cancel what he called plans for a secret meeting with Taliban and Afghan leaders at the Camp David, Maryland, presidential retreat over the weekend had poisoned the prospects for peace.

“The Camp David ploy appears to have been an attempt to satisfy Trump’s obsession with carefully curated public spectacles -- to seal the deal, largely produced by special envoy Zalmay Khalilzad and Taliban negotiators, with the president’s imprimatur,” said John Glaser director of foreign policy studies at the Cato Institute.

Trump has been talking of a need to withdraw U.S. troops from the “endless war” in Afghanistan since his 2016 presidential campaign. And he said anew in a tweet on Monday, “We have been serving as policemen in Afghanistan, and that was not meant to be the job of our Great Soldiers, the finest on earth.”

He added, without explanation, “Over the last four days, we have been hitting our Enemy harder than at any time in the last ten years.”

There has been no evidence of a major U.S. military escalation.

“When the Taliban tried to gain negotiating advantage by conducting terror attacks inside of the country, President Trump made the right decision to say that’s not going to work,” Pompeo said Sunday.

Trump said he called off negotiations because of a recent Taliban bombing in Kabul that killed a U.S. service member, even though nine other Americans have died since June 25 in Taliban-orchestrated violence. But the emerging agreement had started unraveling days earlier after Afghan President Ashraf Ghani postponed his trip to Washington and the Taliban refused to travel to the U.S. before a deal was signed, according to a former senior Afghan official.

As Trump’s re-election campaign heats up, his quest to withdraw the remaining 13,000 to 14,000 U.S. troops from Afghanistan remains unfulfilled — so far.

At the Pentagon, spokesman Jonathan Hoffman declined Monday to comment on the outlook for the administration’s plan to reduce the U.S. troop level in Afghanistan to 8,600.

Democrats said Trump’s decision to nix a deal with the Taliban was evidence that he was moving too quickly to get one. Far from guaranteeing a cease-fire, the deal only included Taliban commitments to reduce violence in Kabul and neighboring Parwan province, where the U.S. has a military base.

The Taliban have refused to negotiate with the Afghan government it sees as illegitimate and a puppet of the West. So, the Trump administration tried another approach, negotiating with the Taliban first to get a deal that would lead to Taliban talks with Afghans inside and outside the government.

Some administration officials, including national security adviser John Bolton, did not back the agreement with the Taliban as it was written, a U.S. official familiar with the negotiations said. They didn’t think the Taliban can be trusted. Bolton advised the president to draw down the U.S. force to 8,600 — enough to counter terror threats — and “let it be” until a better deal could be hammered out, the official said.

The official spoke on condition of anonymity to discuss private deliberations.

Khalilzad, the lead U.S. negotiator, recently announced that he had reached an agreement in principle with the Taliban. Under the deal, the U.S. would withdraw about 5,000 U.S. troops within 135 days of signing. In exchange, the insurgents agreed to reduce violence and prevent Afghanistan from being used as a launch pad for global terror attacks, including from a local Islamic State affiliate and al-Qaida.

Pompeo said the Taliban agreed to break with al-Qaida — something that past administrations have failed to get the Taliban to do.

The insurgent group hosted al-Qaida leader Osama bin Laden as he masterminded the 9/11 attacks in 2001. After the attacks, the U.S. ousted the Taliban, which had ruled Afghanistan with a harsh version of Islamic law from 1996 to 2000.

But problems quickly emerged. On Thursday, a second Taliban car bomb exploded near the U.S. Embassy in Kabul, killing 12 people including a U.S. soldier. Khalilzad abruptly returned to Doha, Qatar, for more negotiations with the Taliban. He has since been recalled to Washington.

It’s unclear if the talks will resume because the Taliban won’t trust future deals they negotiate with the U.S. if they think Trump might then change course, according to the former senior Afghan official, who was not authorized to discuss the issue and spoke only on condition of anonymity. The official, who has discussed the peace process with U.S. and Afghan officials, said Khalilzad’s team was not aware of Trump’s plans to tweet the end of the talks Saturday evening.

Trump’s suspension of the negotiations “will harm America more than anyone else,” the Taliban said in a statement.

The former Afghan official said the deal fell apart for two main reasons. First, the Taliban refused to sign an agreement that didn’t state the end date for a complete withdrawal of American forces. That date was to be either November 2020, the same month of the U.S. presidential election, or January 2021, he said.

The U.S.-Taliban agreement was to be followed by Taliban talks with Afghans inside and outside the government to chart a political future for the country. Ghani told Khalilzad that putting a withdrawal date in the agreement would undermine the all-Afghan discourse before it began.

Secondly, the U.S. was unsuccessful in convincing Ghani to postpone the Afghan presidential election set for Sept. 28, the official said. The U.S. argued that if the elections were held and Ghani won, his opponents and other anti-Ghani factions would protest the results, creating a political crisis that would make the all-Afghan talks untenable. Other disagreements included why the deal did not address the Taliban’s linkages to Pakistan and prisoner-hostage exchanges, the official said.

Trump says Iran appears to be ‘standing down’

Trump doubles down on striking cultural sites in Iran