Giroud, Kane and Ronaldo on target in Euro 2020 qualifying 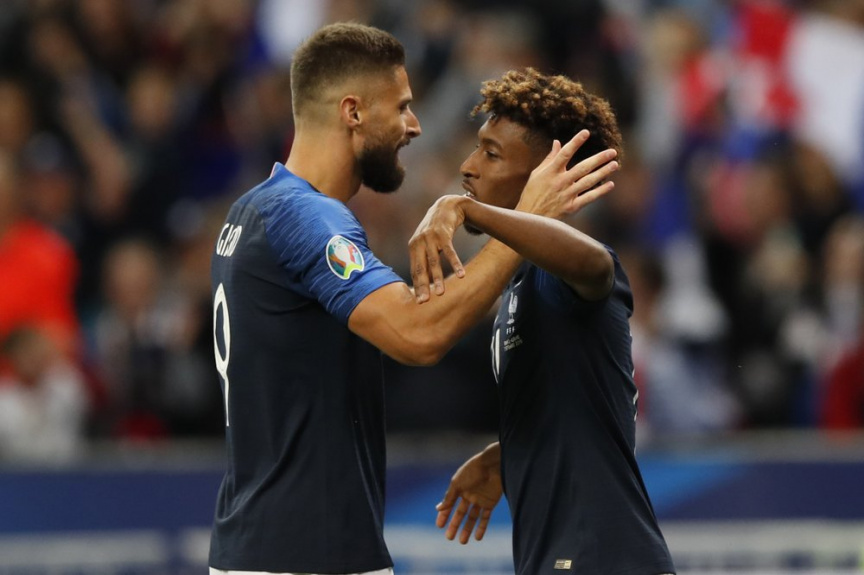 PARIS (AP) — While Olivier Giroud fights to start for Chelsea, his France place looks rock solid heading toward the European Championship next year.

By which time he might well have overtaken Michel Platini in France’s scoring charts.

Giroud took his international tally to 36 with the second goal in Group H leader France’s 4-1 home win against Albania in qualifying for Euro 2020 on Friday. Only France greats Platini with 41 and Thierry Henry with 52 have more goals for Les Bleus.

Yet Giroud is not always in favor with The Blues — Chelsea — despite the veteran striker finishing as top scorer in last season’s Europa League with 11 as the London-based club won it to qualify for the Champions League.

It’s a different story for Harry Kane because he continues to be an undisputed star for club and country.

His hat trick in a 4-0 home win against Bulgaria ensured England’s third straight win in qualifying and moved it on top of Group A ahead of Kosovo, which beat the Czech Republic 2-1 at home.

Kane took his international tally to 25 goals in 40 appearances by opening the scoring in the first half, and added two second-half penalties either side of setting up Raheem Sterling’s goal.

World Cup semifinalist England is unbeaten in 11 matches against Bulgaria, which is last in Group A with two points.

Albania’s players were stunned when the wrong national anthem was played beforehand, delaying the start by nearly 10 minutes until the correct one was played.

Once the action started, Kingsley Coman celebrated his second and third France goals in what has been an injury-hit international career since bursting onto the scene at Euro 2016.

Kosovo is 15 games unbeaten following a comeback 2-1 home win against the Czech Republic.

The Czechs took the lead through forward Patrik Schick’s 16th-minute goal but was pegged back four minutes later by midfielder Vedat Muriqi.

Kosovo’s winner came midway through the second half when defender Mergim Vojvoda stroked the ball in from a low corner.

Police in Kosovo arrested eight Czech fans on Friday for allegedly planning to fly a drone with a pro-Serbia banner during Saturday’s game. Kosovo declared independence from Serbia in 2008, which Belgrade refuses to recognize.

Next up for Kosovo, which is one point behind Group A leader England, is a London trip to face Kane’s confident England at Wembley.

Giroud finished off a fine move involving strike partner Antoine Griezmann and left back Lucas Hernandez to put France further ahead after Kingsley Coman opened the scoring early on.

Albania had trouble containing the runs of Hernandez, who drew a foul to earn a penalty in the 36th. Griezmann strode confidently but went for power over placement and smacked the ball against the crossbar.

Giroud and Griezmann combined expertly to set up Coman’s second goal in the 68th. Coman cushioned a pass and spun neatly around a defender before caressing the ball in.

It was a dream debut for Jonathan Ikoné, coming off the bench to score late after a superb flick pass from fellow substitute Nabil Fekir.

Albania grabbed a last-minute consolation from the penalty spot.

France tops Group H on goal difference from Turkey and Iceland, with the sides locked on 12 points.

Turkey left it late to beat Andorra 1-0, thanks to midfielder Ozan Tufan’s 89th-minute header in Istanbul.

Striker Kolbeinn Sigthórsson netted in the first half; midfielder Birkir Bjarnason and forward Jón Dadi Bödvarsson scored after the break.

Ronaldo took his astonishing tally of international goals to 89 with the third in Portugal’s 4-2 win at Serbia.

Midfielder William Carvalho put Portugal ahead late in the first half and Gonçalo Guedes thumped home in the 58th.

Defender Nikola Milenkovic pulled one back midway through the second half at Stadion Rajko Mitic in Belgrade, before Ronaldo latched onto Bernardo Silva’s pass in the 80th.

Powerful striker Aleksandar Mitrovic replied in the 85th only for Silva to make it 4-2 one minute later.

Unbeaten Ukraine won at Lithuania 3-0 and leads with 13 points — having played two more games than second-placed Portugal on five.