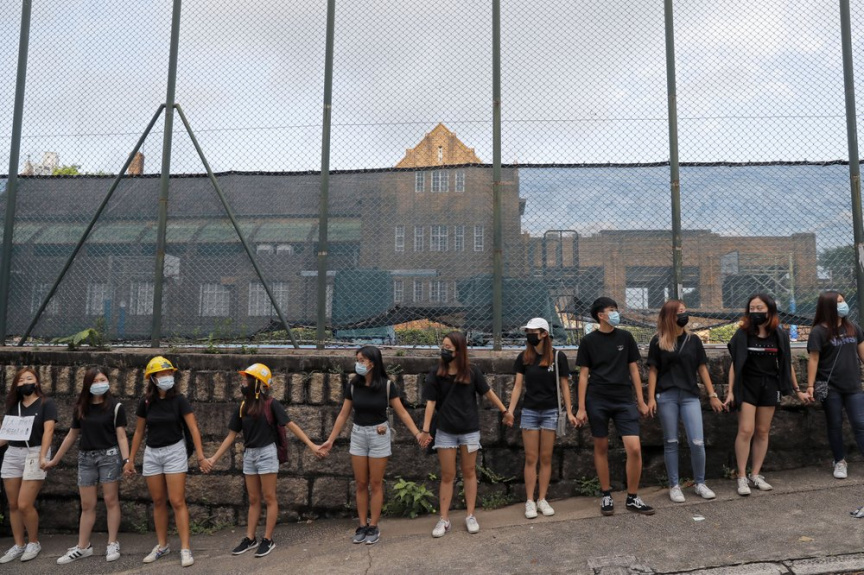 People form human chain outside the Maryknoll Convent School in Hong Kong, Friday, Sept. 6, 2019. Hong Kong leader Carrie Lam said Thursday that the decision to withdraw an extradition bill that sparked months of demonstrations in the semi-autonomous Chinese territory was her government's own initiative to break the impasse, and not Beijing's directive. (AP Photo/Kin Cheung)

HONG KONG (AP) — Students in Hong Kong are forming human chains outside their schools to raise awareness for the remaining four demands of protesters involved in months of demonstrations in the semi-autonomous Chinese territory.

The continuing act of defiance Friday came two days after Hong Kong leader Carrie Lam announced that her government will be formally withdrawing an extradition bill that sparked the demonstrations.

The proposed legislation would have allowed Hong Kong residents to be sent to mainland China to stand trial.

Some protesters say that they will continue their resistance because Lam’s announcement fulfills only one of five demands, which include electoral reforms and an independent inquiry into alleged police brutality.

Hong Kong is a former British colony that was returned to China in 1997.

Woman arrested at Manila airport with newborn in bag