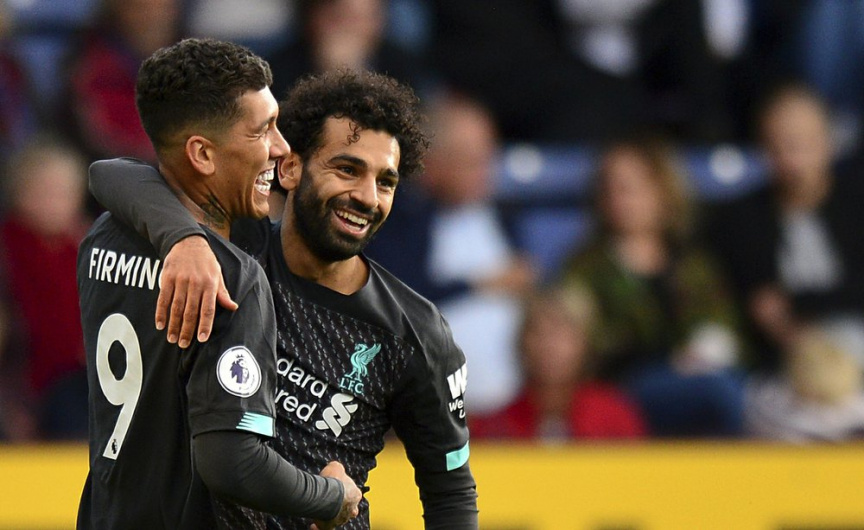 Oh, and the usual dose of VAR controversy.

Just a typical afternoon in this season’s Premier League.

By beating Burnley 3-0 on Saturday, Liverpool achieved a club-record 13th straight league victory and stayed in first place on a maximum 12 points heading into the two-week break for internationals. No other team in England’s four professional leagues has won all its games since the start of the season.

It is now 14 goals this season for the defending champions after a 4-0 home win over Brighton that included a double from Sergio Aguero, who is the top scorer in the league with six goals.

City’s win was marred by a first-half injury to arguably the team’s best defender, Aymeric Laporte, which according to manager Pep Guardiola could keep the center back out for “a while.”

Meanwhile, pre-season predictions that this will be a transitional year for United and Chelsea under inexperienced coaches are proving to be true, with the two teams already seven points off Liverpool before September with just one win apiece so far.

Both squandered leads Saturday, United failing to build on Daniel James’ early goal — his third of the season following his offseason arrival from second-tier Swansea — and drawing 1-1 at Southampton.

Chelsea will be even more unhappy, surrendering a two-goal lead at home to promoted team Sheffield United and drawing 2-2.

Every weekend has featured some sort of contentious issues with VAR, which is being used for the first time in the Premier League this season, and the latest dispute was at Crystal Palace’s 1-0 win over Aston Villa.

Villa thought it had scored an equalizer in the seventh minute of stoppage time through Henri Lansbury, only for the goal to be ruled out because teammate Jack Grealish was adjudged to have dived in the build-up. Villa’s players were furious and it looked a tight call, with the video assistant referee choosing not to overturn the on-field decision of the referee.

A touch of fortune and a defensive error helped Liverpool ease to a 13th straight win.

Trent Alexander-Arnold’s cross from the right glanced off the back of Burnley striker Chris Wood and span high and beyond the reach of goalkeeper Nick Pope into the far corner of the net in the 33rd.

Firmino added the third in the 80th from a counter-attack.

Man City’s third victory in four matches might have come at a huge cost with the right knee injury to Laporte.

The French defender, who was called up by his national team on Friday for just the second time, punched the ground as soon as he made contact with Adam Webster as the Brighton center back charged down the right wing. Laporte held his hands behind his head and shook his head as he was carried off.

“It doesn’t look good,” Guardiola said. “I’m waiting for the doctor to call me. He (Laporte) might be out for a while.”

Any lengthy absence for Laporte would be a major blow to City, which released long-serving captain Vincent Kompany in the offseason and has John Stones currently out injured. Fernandinho, a center midfielder, filled in as a center back off the bench against Brighton.

Kevin De Bruyne and substitute Bernardo Silva were the other scorers for City.

The sight of Paul Pogba hobbling away from St. Mary’s stadium was a further blow to United after its poor display against Southampton.

United manager Ole Gunnar Solskjaer said Pogba “got a bad knock on his ankle” but expected the midfielder to still turn up for international duty with France next week.

James’ goal was canceled out by Jannik Vestergaard’s header in the 58th minute. Kevin Danso was handed a second yellow card for a crude, high challenge on Scott McTominay, reducing Southampton to 10 men in the 73rd, but United couldn’t capitalize.

Tammy Abraham has now scored two goals in consecutive games for Chelsea, cementing his place as the team’s first-choice striker

His first-half double — after his brace against Norwich last weekend — was not enough to see off Sheffield United, which reduced the deficit through Callum Robinson less than a minute after the restart before Kurt Zouma’s own-goal in the 87th minute.

Jamie Vardy scored twice in Leicester’s 3-1 win over Bournemouth, West Ham beat Norwich 2-0 through goals by Sebastian Haller and Andriy Yarmolenko, while Watford collected its first point of the season by drawing 1-1 at Newcastle.