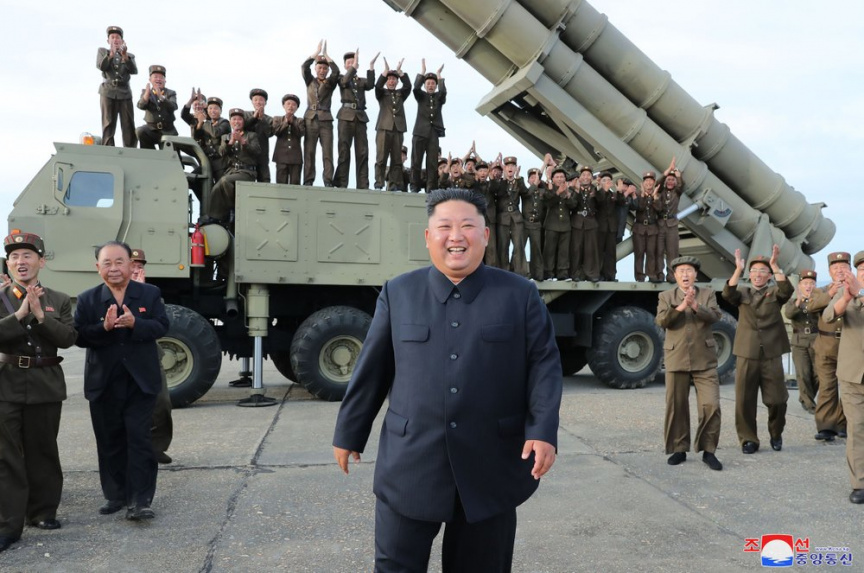 This Saturday, Aug. 24, 2019, photo provided Sunday, Aug. 25, by the North Korean government, shows North Korean leader Kim Jong Un, center, smiles after the test firing of an unspecified missile at an undisclosed location in North Korea. North Korea fired two suspected short-range ballistic missiles off its east coast on Saturday in the seventh weapons launch in a month, South Korea's military said, a day after it vowed to remain America's biggest threat in protest of U.S.-led sanctions on the country. The content of this image is as provided and cannot be independently verified. Korean language watermark on image as provided by source reads: "KCNA" which is the abbreviation for Korean Cent

Kim underscored the need to “continue to step up the development of Korean-style strategic and tactical weapons for resolutely frustrating the ever-mounting military threats and pressure offensive of the hostile forces,” according to the KCNA.

The “hostile forces” likely referred to the United States and South Korea, whose recently ended regular military drills infuriated North Korea. The North has called the drills an invasion rehearsal and conducted a slew of missile and rocket tests in response.

Some experts said North Korea aims to show off its weapons to try to increase its leverage ahead of a possible restart of nuclear negotiations, which remain largely stalemated since the second summit between President Donald Trump and Kim in Vietnam in February fell apart due to squabbling over U.S.-led sanctions on North Korea. The two leaders met again at the Korean border in late June and agreed to resume talks.

Trump downplayed the latest launch, saying “Kim Jong Un has been, you know, pretty straight with me. ... He likes testing missiles but we never restricted short-range missiles. We’ll see what happens.”

South Korea’s military said North Korea fired two suspected short-range ballistic missiles off its east coast on Saturday morning and that they flew about 380 kilometers (236 miles) at the maximum altitude of 97 kilometers (60 miles). It was the seventh known weapons test by North Korea in about a month.

Most of the North Korean weapons tested in recent weeks have shown short-range flight distances. This suggested North Korea still doesn’t intend to lift its self-imposed moratorium on nuclear and long-range missile tests, which would certainly derail the negotiations with Washington.