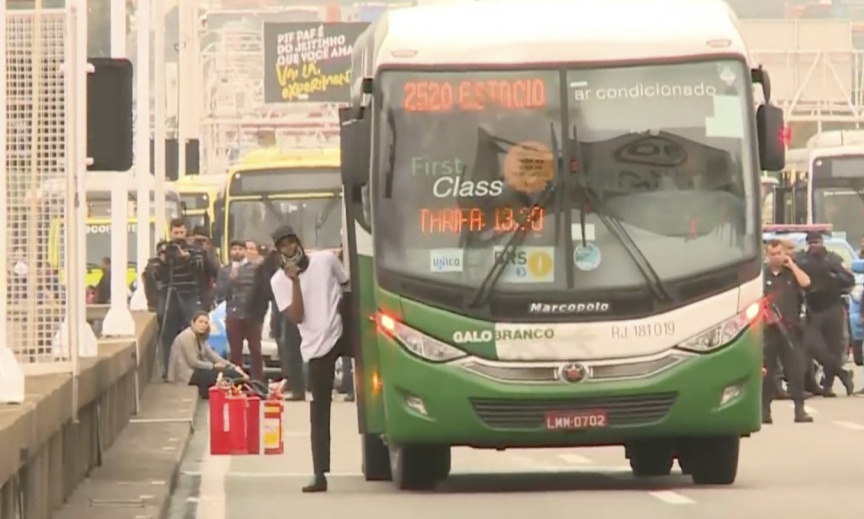 In this frame grab from video provided by TV Globo, an armed man who took dozens of hostages on a bus, steps outside of the bus momentarily on the bridge connecting the city of Niteroi to Rio de Janeiro, Brazil, Tuesday, Aug. 20, 2019. The man threatened to set the vehicle on fire with gasoline before police shot him dead in a four-hour standoff broadcast live on television. (TV Globo via AP)

RIO DE JANEIRO (AP) — Brandishing a fake gun, a man on Tuesday took dozens of hostages on a bus in Brazil and threatened to set the vehicle on fire with gasoline before police shot him dead in a four-hour standoff on Latin America’s longest bridge.

All the hostages were freed unharmed on a 13-kilometer (8-mile) bridge that offers a sweeping view of Rio de Janeiro’s Sugarloaf Mountain and the statue of Christ the Redeemer. The panoramic setting where the man made his move seemed to reflect a bid for maximum publicity in a spot with virtually no chance of escape.

“He told us he didn’t want our belongings, that he didn’t want to hurt us, that he just wanted to go down in history,” said Hans Moreno, a hostage who had been sitting at the back of the bus.

The bridge links Rio to the Niteroi municipality across Guanabara Bay. Many people use it to travel to and from work in Rio, and hundreds of vehicles were backed up as police closed its eight lanes and tried to get control of the dangerous situation. The bus was coming from Sao Gonçalo, a municipality struggling with poverty and violence.

Police initially said the man had a gun and a knife. Later, however, Lt. Col. Maurilio Nunes of the elite police squad that handled the hostage-taking said the gun was fake.

“He had highs and lows,” Nunes said of the hostage taker, who communicated with police. Professional psychologists were summoned to help police assess the man’s troubled state of mind, according to Nunes.

The man took 37 people hostage on the bus at around 5:30 a.m., as commuter traffic was increasing, police said. He released two hostages, then another two, and then two more, separately. Later, he stepped out of the bus, threw an object resembling a bag and was shot by a sniper.

Several shots were heard when police killed the man, and journalists and others in the area ducked to the ground.

The man’s intentions were unclear and he did not make any particular demands, according to police. The standoff was broadcast live on Brazil’s TV Globo, riveting Brazilians in a nation accustomed to high levels of crime.

The man instructed a hostage to bind the wrists of other passengers with plastic straps, but let them make brief phone calls to family members, according to Moreno, one of the hostages. He said he jotted short descriptions on a piece of paper of where the hostage-taker was standing in the bus, and placed the paper at a window in an attempt to guide police.

Gov. Wilson Witzel of Rio de Janeiro pumped his fist in triumph after arriving on the bridge in a helicopter after the hostage-taker was killed. He later praised police, saying the hostage situation was high-profile but that armed criminals are regularly “terrorizing” people out of sight of most Brazilians.

Any criminal with a firearm “can and should be shot down by an elite sniper,” said Witzel, dismissing concerns that police killings of suspects in Rio are increasing.

Police in Rio killed 881 people in the first six months of this year — almost five a day — a double digit increase compared to the same period in 2018, according to official figures.

Witzel, a former marine, has argued in favor of using snipers on helicopters to shoot armed criminals in Rio’s slums. He is a political ally of President Jair Bolsonaro, whose successful election platform last year included a pledge to get tough on crime.

“We don’t have to feel sorry for him,” Bolsonaro told reporters from Brasilia before police forces had managed to regain control of the situation.

Some passengers who were earlier freed by the assailant told police that the man had spilled gasoline in the bus and was threatening to set it on fire. Witzel said there was a “strong smell of gasoline” when he went inside the bus after the hostage-taker was killed.

At one point, the man freed a hostage who only managed to walk a few meters toward police before passing out on the ground and being taken to an ambulance.

The episode reminded many Brazilians of shocking images from a bus seizure in Rio de Janeiro in 2000 during which a hostage and the gunman were killed.

That confrontation, which was also shown on live television, inspired Bus 174, an award-winning documentary that explored the social roots of violence in Brazilian society and scrutinized problems in the police force and criminal justice system.

In 2017, a man with a toy gun took 30 people hostage on a bus on the same bridge linking Rio and Niteroi, and released them unharmed after an hour, according to local media.

Sao Paulo cemeteries to dig up graves for virus space