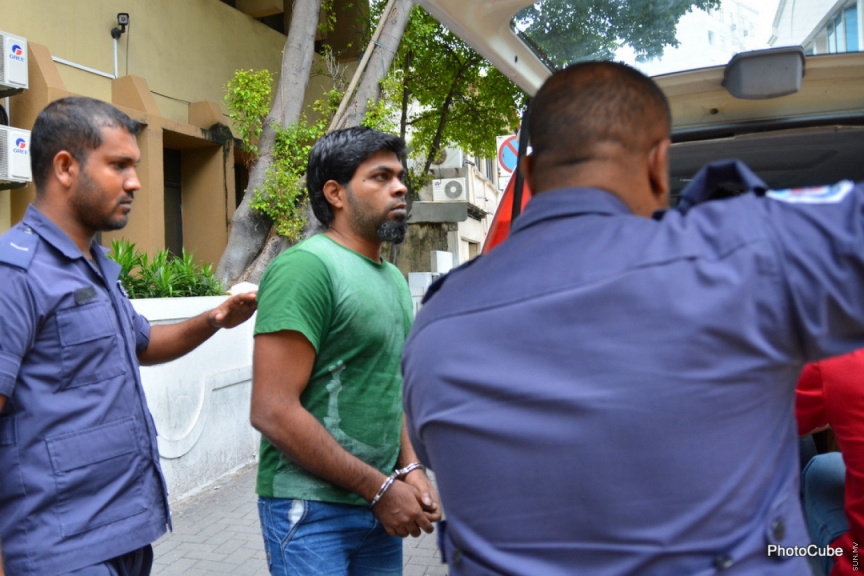 Mohamed Niyaz; He has admitted to killing Ali Shiham in 2014 and has apologised for it. (Sun File Photo/Fayaz Moosa)

Mohamed Niyaz, the man accused of attacking Ali Shiham and killing him in K.Thulusdhoo in 2014 has stated that his actions and the attack on Shiham came as a result of his intoxication and has apologized for Shiham's death.

Mohamed Niyaz from Redrose, K. Thulusdhoo had admitted to attacking and killing Ali Shiham from Bijiliufaa, K. Thulusdhoo. The statement apologising for Shiham's death from Niyaz came after his case was appealed to the High Court by the state.

Niyas has been sentenced to death by the Criminal Court after he was found guilty of murder and the case was appealed to the High Court by the state to ensure that this was the final decision.

At today's hearing, Niyaz stated that he had no intention of killing Shiham but that he was very intoxicated when he attacked Shiham with a knife and that he "was sorry for killing him".

The Criminal Court stated that even though Niyaz had stated that he had no intention of killing Shiham, it was evident that Shiham died from the actions and injuries caued by Niyaz with a knife. Shiham's relatives including his grandmother and wife had requested the court for retributive justice in the form of Qisas. Shiham's wife had also requested for Qisas on behalf of Shiham's children, who have not yet come of age.

A judge in the case stated that it is allowed in the Maliki Mazhab of Islam for the mother to speak on behalf of the children if they underage in such situations. However, another judge stated that this was in contrast to the constitution which requests the input of trusted Islamic scholars and not depend on Mazhabs in such a situation.

The prosecutors in the case then requested an additional hearing to clarify this matter which was granted by the Judges panel who also acknowledged that since it was a murder case, time and research should be done before arriving at a decision.

The Judges panel also reminded Niyaz that he was still allowed legal representation. However, this was refused by Niyaz who stated after he was repeatedly reminded of this fact by the judges, that since he had already admitted to the crime there was no need to create any more lies.

Concern voiced over lack of willingness to adopt teens