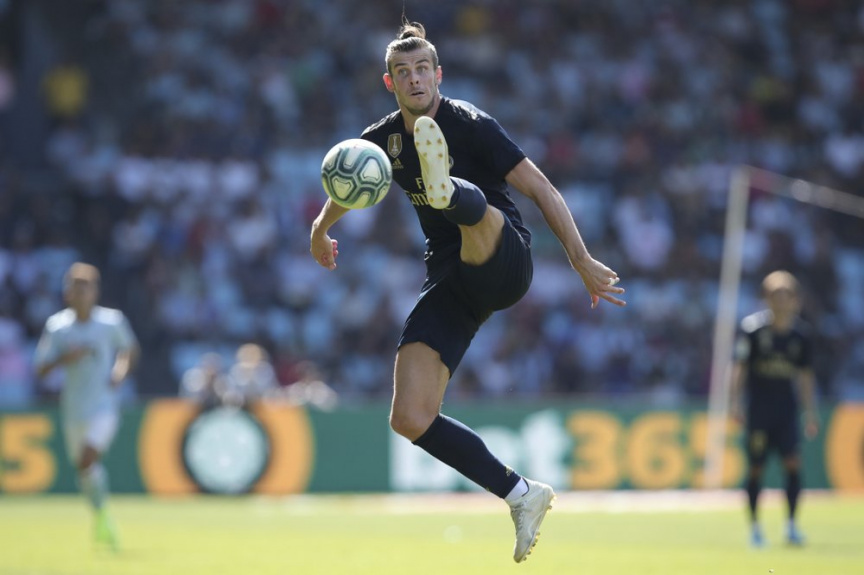 MADRID (AP) — Zinedine Zidane’s revamped Real Madrid got the spark it needed from a couple of veterans to get off to a winning start in the Spanish league.

In the absence of injured new signing Eden Hazard, it was Karim Benzema and Gareth Bale who contributed with goals and assists as Madrid comfortably won at Celta Vigo 3-1 on Saturday.

Bale, who many thought would be gone from the squad by now, set up Benzema’s opening goal, then Toni Kroos and Lucas Vázquez added to the lead in a match in which Madrid played most of the second half with 10 men following a red card to Luka Modric.

“He is going to stay,” said Zidane, who last month was outspoken about Bale’s transfer being good for everyone. “We have reason to feel positive about all the players that we have in the squad right now.”

It was Madrid’s first away win since Zidane returned as coach late last season. The team is trying to rebound from one of its worst campaigns in decades, when it was out of title contention several weeks before the end of last season.

“It was important to get off to a good start,” Zidane said. “It was great to get the three points in a difficult away match like this. We leave with a good feeling.”

Benzema opened the scoring from close range after Bale’s perfectly timed low cross in front of the goal in the 12th minute.

Modric was sent off early in the second half after video review showed he fouled an opponent from behind.

Real Madrid goalkeeper Thibaut Courtois made a spectacular reflex save off a close-range header on the ensuing free kick, and moments later Kroos added to Madrid’s lead with a superb long-range shot into the top corner.

Substitute Vázquez sealed the victory after a pass by Benzema following a nifty spin move by the French striker outside the area.

Without Hazard, who picked up a muscle injury in a training session on Friday, Zidane began the season with a 4-3-3 formation; Sergio Ramos and Raphael Varane were flanked by Marcelo and Odriozola in the defense, Casemiro guarded Kroos and Modric in midfield, and Vinícius Jr. joined Benzema and Bale in the attack.

Playmaker James Rodríguez, who also was expected to leave in the offseason after his loan to Bayern Munich ended, was on the bench.

On Friday, two-time defending champion Barcelona lost at Athletic Bilbao 1-0 for its first opening defeat in a decade.

Valencia was held by Real Sociedad to a heartbreaking 1-1 draw at home after conceding an equalizer in stoppage time shortly after missing a penalty kick that would have increased its lead.

Forward Kevin Gameiro had a chance to seal the victory five minutes into injury time but sent his shot from the spot over the crossbar. Mikel Oyazarbal evened the match by converting his own shot from the spot after a player on the Valencia wall touched the ball with his hand on a free kick.

Granada rallied from two goals down in the final 20 minutes of its 4-4 draw at Villarreal, while promoted Mallorca edged Eibar 2-1. Osasuna, another team back in the top flight, won at Leganés 1-0.

Revamped Atlético off to winning start in league