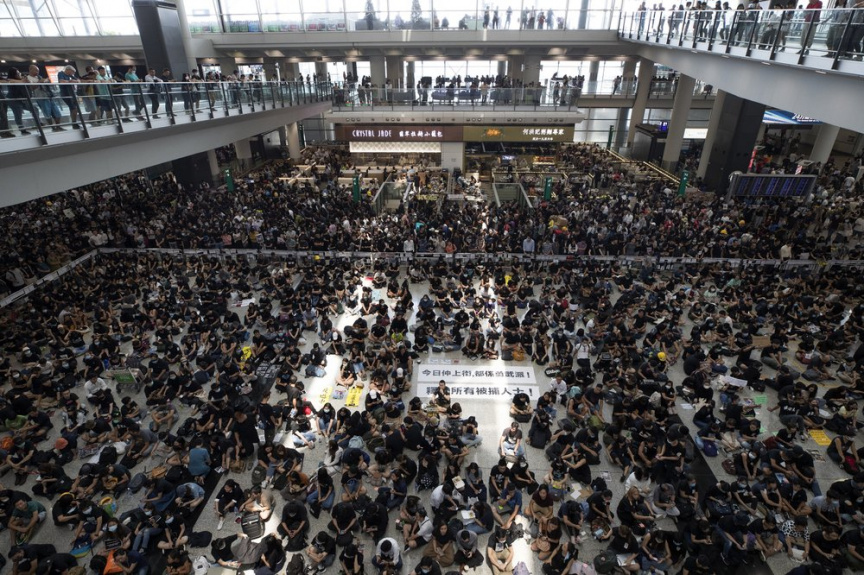 Protesters surround banners that read: "Those on the street today are all warriors!" center top, and "Release all the detainees!" during a sit-in rally at the arrival hall of the Hong Kong International airport in Hong Kong, Monday, Aug. 12, 2019. Hong Kong airport suspends check-in for all remaining flights Monday due to ongoing pro-democracy protest in terminal. (AP Photo/Vincent Thian)

At one of the world’s busiest airports, airlines were checking in passengers for new flights and for those unable to leave Monday when 200 flights were cancelled because thousands of pro-democracy demonstrators had packed into the airport’s main terminal.

Protesters have shown no sign of letting up on their campaign to force Lam’s administration to respond to their demands. No new violence was reported, although the city is on edge after more than two months of near-daily and increasingly bloody confrontations between protesters and police.

Demonstrators have called for an independent inquiry into what they call the police’s abuse of power and negligence. Some protesters thrown bricks, eggs and flaming objects at police stations.

Lam told reporters that dialogue would only begin when the violence stopped. She reiterated her support for the police and said they have had to make on-the-spot decisions under difficult circumstances, using “the lowest level of force.”

“After the violence has been stopped, and the chaotic situation that we are seeing could subside,” Lam said, “I as the chief executive will be responsible to rebuild Hong Kong’s economy ... to help Hong Kong to move on.”

She did not elaborate on what steps her government will take toward reconciliation. After two months, the protests have become increasingly divisive and prompted clashes across the city.

Software engineer Joydeep Chakravarti, whose connecting flight to San Francisco was canceled late Monday, expressed frustration that he was told to leave the airport when he wanted to stay inside the terminal.

“I don’t know what’s out there, so I don’t want to leave. I didn’t make any plans for Hong Kong,” said Chakravarti, who had a carry-on bag with laptop, charger and an extra shirt while the rest of his luggage already was checked in on his Singapore Airlines flight.

Kerry Dickinson, a traveler from South Africa, said she had trouble getting her luggage Tuesday morning. “I don’t think I will ever fly to Hong Kong again,” she said.

On Monday, the central government in Beijing ominously characterized the protest movement as something approaching “terrorism” that posed an “existential threat” to the population. Beijing tends to define terrorism broadly, including nonviolent movements opposing government policies on the environment or Tibet, for example.

Hong Kong was promised certain democratic rights when China took over the then-British colony in 1997, but in recent years, some have accused Beijing of steadily eroding their freedoms.

China gets tougher on Trump after new tariff threat