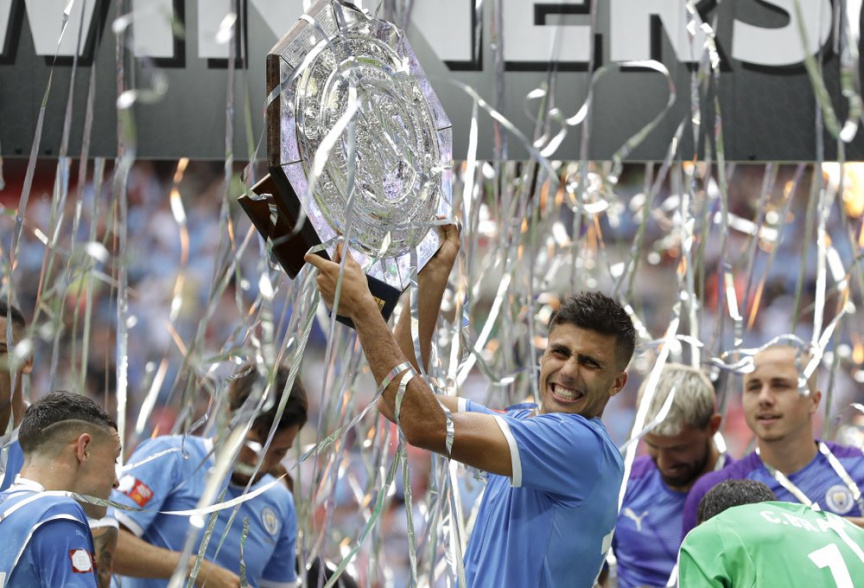 MANCHESTER, England (AP) — One thing Pep Guardiola does not tolerate is complacency.

After his formidable Manchester City side powered to the Premier League title with a record-equaling five games to spare in 2018, Guardiola insisted there should be no let-up in the remaining matches. City switched its focus to breaking more records, and smashed a host of them as it went on to break the 100-point barrier.

It carried that momentum into last season and again proved the dominant force as it claimed an unprecedented domestic treble after edging a thrilling title race with Liverpool.

Still, the relentless Guardiola shows no sign of easing up, with a club record 62.8 million pounds ($76.2 million) spent to boost the midfield ranks of a star-studded squad with Spaniard Rodri.

That is why, even if Liverpool kicks on from last season’s Champions League success to launch another strong challenge, City enters the new campaign as clear favorite.

Guardiola, whose trophy haul in a glittering managerial career now numbers 27, summed up the determination during pre-season.

“We prepare how we have for the last three years: step by step, reanalyze, readapt and move forwards,” he said. “We will see our level and whether at the end of the season we can be fighting for titles.

“But they are smart guys. They know they are an incredible squad and it isn’t necessary to tell them they have to play well to be in contention to play every day.”

One of the main differences from last season is that, for the first time in 11 years, City will be going into a campaign without Vincent Kompany.

The long-serving captain left in May to take up the role of player-manager at Anderlecht after playing a typically talismanic role in the run-in.

His inspirational leadership will be sorely missed and his departure reduces the number of top-quality center-halves available to Guardiola, although City do have a partnership of potential in John Stones and Aymeric Laporte.

There are few obvious weaknesses in the City side. The arrival of Rodri has ended a lengthy search for a long-term successor to Fernandinho in the defensive midfield role and left-back issues will be resolved if Benjamin Mendy can stay fit.

Even if not, there is now specialist back-up in Angelino, although Oleksandr Zinchenko has improved markedly.

The depth of the goalkeeping resources was not tested last season but Claudio Bravo’s return to fitness after almost a year out provides experienced cover for the brilliant Ederson, even if the Chilean has not always covered himself in glory.

Up front Sergio Aguero remains the key man having firmly re-established himself as first-choice striker under Guardiola while Raheem Sterling is now undoubtedly world class and Kevin De Bruyne is fit again.

David Silva may be entering his final season at City but Phil Foden looks ready to step into his boots and Bernardo Silva is equally dangerous.

Other factors such as the Champions League, injuries and suspensions could come into play but, at the start of the season, the smart money will be on City making it three in a row.