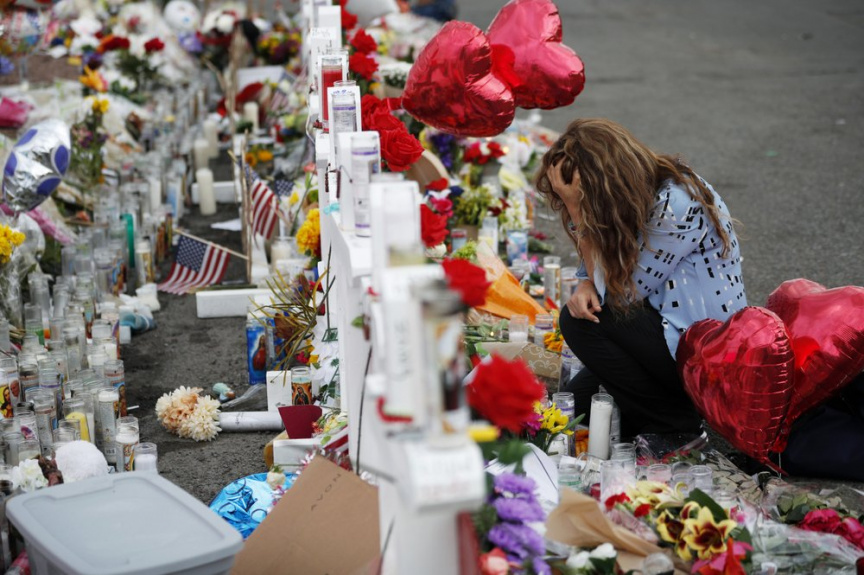 Gloria Garces kneels in front of crosses at a makeshift memorial near the scene of a mass shooting at a shopping complex Tuesday, Aug. 6, 2019, in El Paso, Texas. The border city jolted by a weekend massacre at a Walmart absorbed more grief Monday as the death toll climbed and prepared for a visit from President Donald Trump over anger from El Paso residents and local Democratic leaders who say he isn't welcome and should stay away. (AP Photo/John Locher)

DAYTON, Ohio (AP) — Ohio’s Republican governor bucked his party to call for expanded gun laws Tuesday and some Democrats in Texas told President Donald Trump to stay away as both states reeled from a pair of shootings that killed 31 people.

A racist screed remained the focus of police investigating the massacre at a Walmart store in El Paso, Texas, while the FBI opened an investigation into the mass shooting in Dayton, Ohio, citing the gunman’s interest in violent ideology.

PUSH FOR LEGISLATION IN OHIO

Persuading the Legislature to pass such proposals could be an uphill battle. It has given little consideration this session to those and other gun-safety measures already introduced by Democrats and DeWine’s Republican predecessor, John Kasich, also unsuccessfully pushed for a so-called red flag law on restricting firearms for people considered threats.

“We can come together to do these things to save lives,” DeWine said.

On Tuesday, the FBI opened an investigation into the mass shooting at a popular Dayton nightlife district to try to determine what ideologies influenced 24-year-old gunman Connor Betts.

Special Agent Todd Wickerham, head of the FBI’s Cincinnati field office, said the agency is looking into who might have helped Betts and why he chose his specific target.

Wickerham didn’t say whether the FBI is looking at treating the case as domestic terrorism, as it did in the Texas mass shooting earlier in the weekend.

President Donald Trump was planning visits to both cities Wednesday, an announcement that stirred some resistance in El Paso.

Democratic Rep. Veronica Escobar of El Paso made clear that the president was not welcome in her hometown as it mourned. Democratic presidential candidate Beto O’Rourke, who was an El Paso congressman for six years, also said Trump should stay away.

Escobar tweeted that the White House had invited her to join Trump during his visit but she’ll instead attend a rally that organizers say will confront the president and white supremacy while calling for gun control.

“There’s going to be a lot of trauma in our community; a lot of children saw things that no human being should see,” Escobar said.

A woman who briefly dated the Ohio gunman said he suffered from bipolar disorder, joked about his dark thoughts and exhibited a fascination with mass shootings.

Adelia Johnson wrote in an online essay that Betts showed her a video of the Pittsburgh synagogue shooting on their first date.

She said Betts expressed “uncontrollable urges” that she called “red flags,” which eventually led her to call things off in May.

On Monday, Trump made a vague expression of openness to new gun laws, suggesting a bill to expand gun background checks could be combined with his long-sought effort to toughen the nation’s immigration system but gave no rationale for the pairing.

Studies have repeatedly shown that immigrants have a lower level of criminality than those born in the U.S., both shooting suspects were citizens, and federal officials are investigating anti-immigrant bias as a potential motive in the Texas massacre.

In both El Paso and Dayton, a young white male was identified as the lone suspect. The suspect in the Texas shooting, 21-year-old Patrick Crusius, was booked on murder charges. Betts was killed as police quickly swooped in to end his ambush.

‘Too many are selfish’: US nears 5 million virus cases

Kim says launches were warning to US, South