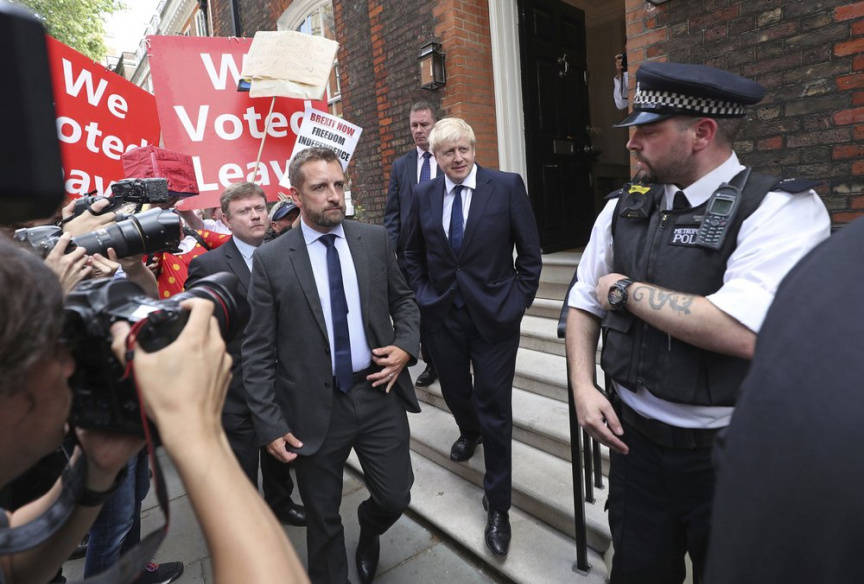 LONDON (AP) — Voting closed Monday in the two-man contest to become Britain’s next prime minister, as critics of likely winner Boris Johnson condemned his vow to take the U.K. out of the European Union with or without a divorce deal.

Members of the governing Conservative Party had until 5 p.m. (1600 GMT) to return postal ballots in the race between Johnson and Foreign Secretary Jeremy Hunt to lead the party and country.

The winner will be announced Tuesday and take over from Prime Minister Theresa May the following day.

Johnson, a populist former mayor of London, is the strong favorite.

Several members of May’s government have said they will resign before they can be fired by Johnson over their opposition to his threat to go through with a no-deal Brexit if he can’t secure a renegotiated settlement with the EU.

Most economists say quitting the 28-nation bloc without a deal would cause Britain economic turmoil. The U.K.’s official economic watchdog has forecast that a no-deal Brexit would trigger a recession, with the pound plummeting in value, borrowing soaring by 30 billion pounds ($37 billion) and the economy shrinking 2% in a year.

Former Labour Prime Minister Gordon Brown said Monday that a no-deal Brexit would be “an act of economic self-harm that runs wholly counter to the national interest.”

EU leaders insist they won’t reopen the 585-page withdrawal agreement they made with May’s government, which has been repeatedly rejected by Britain’s Parliament.

Foreign Office Minister Alan Duncan quit Monday, lamenting in his resignation letter that “we have had to spend every day working beneath the dark cloud of Brexit.”

Duncan expressed deep reservations about Johnson to the BBC.

“I have very grave concerns that he flies by the seat of his pants, and it’s all a bit haphazard and ramshackle,” he said.

Other government ministers, including Treasury chief Philip Hammond, are set to resign Wednesday.

The new prime minister will preside over a House of Commons in which most members oppose leaving the EU without a deal, and where the Conservative Party lacks an overall majority.

Opposition parties are preparing for an early election which could be triggered if the government loses a no-confidence vote in the coming months.

The centrist Liberal Democrats, who have seen a surge in support thanks to their strongly anti-Brexit stance, also chose a new leader Monday.

Traditionally Britain’s third party, the Liberal Democrats came in ahead of the Conservatives in European Union elections in May as voters backed the Lib Dems call to remain in the EU.

Swinson branded Britain’s departure from the EU a “catastrophe” and said having Johnson in the prime minister’s office heightened the danger.

“Tomorrow, Boris Johnson is likely to take the keys to Number 10 and set us on a path to a damaging no-deal Brexit,” she told party members. “I will do whatever it takes to stop Brexit.”