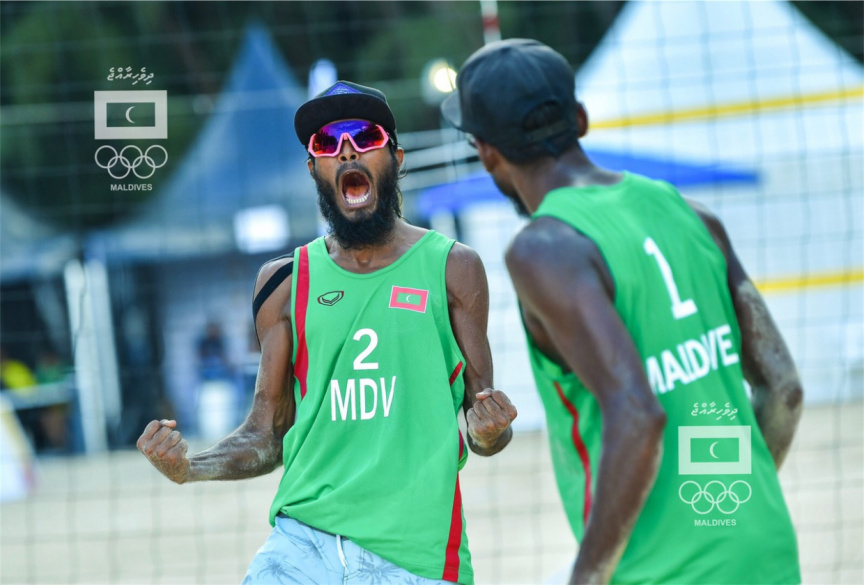 This was the biggest victory by Maldives in the beach volleyball event of the IOIG. (Photo/MOC)

The Maldives has won the silver medal in beach volleyball event at the ongoing Indian Ocean Island Games in Mauritius by beating Seychelles in two games. The Maldives won the first game with a score of 21-12 and 21-10. The second game was won by a score of 21-13 and 21-14, beating Seychelles in all four sets of the two games, and marking the biggest victory for the Maldives in the beach volleyball event of the Indian Ocean Island Games.

The Maldivian team had also won its match with Comoros and stopped just short of the gold medal with its defeat at the hands of Reunion. The victory over Seychelles was seen by President Ibrahim Mohamed Solih and Sports Minister Ahmed Mahloof as well as the Foreign Minister Abdullah Shahid. Minister Mahloof tweeted that this was a historic win for the Maldives in beach volleyball as this was the first major honor for the country in the sport. He also stated that he was hopeful of winning more awards in the future.

The Maldives has so far won three medals at the games and has officially submitted its bid to host the next Indian Ocean Island Games. The Maldivian Women’s table tennis team won the gold medal, while the Men’s Badminton team won the bronze medal in addition to the silver medal won by the beach volleyball team.