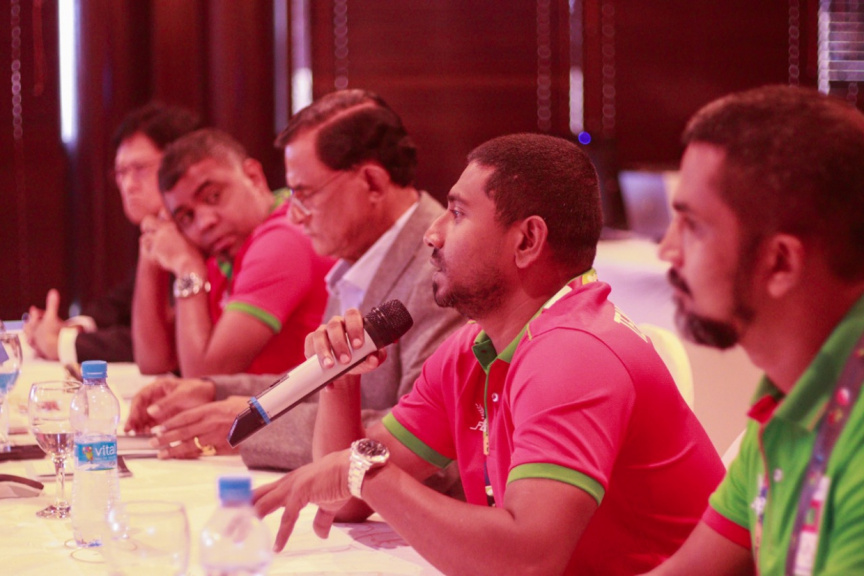 Minister Ahmed Mahloof during the meeting to submit Maldives' bid to host the IOIG games in 2023. (Photo/Youth Ministry)

Maldives has formally submitted its bid to host the Indian Ocean Island Games (IOIG) in 2023. The bid was submitted by Minister of Youth, Sports and Community Empowerment, Mr. Ahmed Mahloof at a special assembly held in Mauritius to receive the bids by nations to host the IOIG in 2023.

The Maldives was not alone in its bid submission as Madagascar and Comoros also submitted bids to host the games at this meeting. The Maldives has carried out extensive research in its efforts to host the games as Minister Mahloof and Foreign Minister Abdullah Shahid recently visited four countries that are taking part in the games and met with their presidents and other top officials of the government to familiarize with the condition and level of sports in those countries. The ministers visited Madagascar, Seychelles, Mauritius, and Comoros during these trips.

After submitting Maldives’ bid to host the games, Minister Mahloof stated that the games had a special connection Maldives and that it is the first international sports competition that was taken part by the Maldives. He also attributed to the fact that the Maldives has never missed taking part in this competition in its 40-year history.

A team of IOIG delegates had also recently visited the Maldives to inspect the facilities in the country and meet with government officials to ensure that the country had the necessary capabilities to host the games. The government had previously stated that it had received positive responses from the team after its visit.