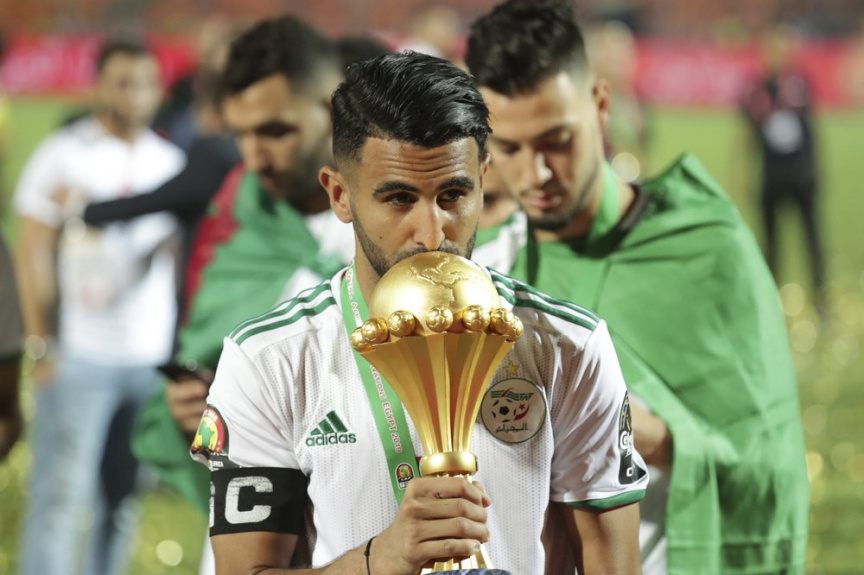 CAIRO (AP) — Algeria won the African Cup of Nations for the first time in nearly three decades on Friday, beating Senegal 1-0 in the final with a deflected goal in the opening seconds by striker Baghdad Bounedjah.

The goal was timed at 79 seconds — the fastest in an African Cup final for at least 39 years — and delivered Algeria just a second African title and first since 1990.

Algeria players sprinted the length of the field and jumped over advertising boards to celebrate with their fans at the final whistle. Some players climbed the fences, fists pumping as the raucous Algeria fans surged toward them.

Algeria last made the final 29 years ago, when it won its sole title before Friday.

“My people have waited a long time,” said Algeria coach Djamel Belmadi, a former Algeria player. “I’m very happy even if it is difficult to express. I’m tired, it’s true, and it is difficult to show my emotions but when I rest my happiness will appear.”

Senegal and Sadio Mane trudged off the field at the 75,000-seat Cairo International Stadium disappointed again. Mane, socks down round his ankles, managed to wave to a group of supporters who cheered for him as he left.

Senegal has never won the African Cup and Senegal coach Aliou Cisse had another bitter pill to swallow after missing the penalty that cost Senegal the African Cup in a shootout in its only previous appearance in the final in 2002.

“This is a different generation and Algeria won,” Cisse said. “They seized an opportunity and they scored.”

Senegal’s desperate disappointment was exacerbated when it was awarded a penalty in the second half and then had it taken away following a Video Assistant Referee review.

Cameroonian ref Alioum Alioum penalized Algeria’s Adlane Guedioura for handball but changed his decision after consulting VAR, which is being used at the African Cup for the first time.

Still, Algeria was probably a fitting champion in Egypt having won every game, including a 1-0 win over Senegal in the group stage.

Algeria was captained by Riyad Mahrez, who added an African Cup title to his English Premier League title with Manchester City.

He lifted the trophy in front of the president of the African soccer confederation and FIFA president Gianni Infantino as fireworks and golden glitter exploded into the air behind him.

Mahrez had limited first team action with City but he was an integral part of Algeria’s victory at the African Cup. His injury-time free kick put Algeria into the final and he ended with three goals, the same number as Mane.

Algeria had a dream start and Senegal a nightmare when Bounedjah took advantage of open space on the left in the opening moments, swept inside and hit a shot that deflected off Sane, who was returning from injury for the final.

The ball looped, almost slow motion, over Gomis, who didn’t move, apparently certain that it would go over the crossbar.

Bounedjah’s tournament ended in joy after he attracted attention for his emotional reaction to missing a penalty in the quarterfinals. Fearing he had cost his team, Bounedjah spent much of that match crying in the dugout after he was substituted. Algeria eventually won the quarterfinal in a shootout to keep its dream alive.

Senegal was initially given its penalty in the final when Sarr sped down the right wing and sent a cross in that hit Guedioura on the right arm as he held it down next to his body. There didn’t appear to be any deliberate move by Guedioura to play the ball and the VAR decision appeared correct.

After pointing calmly to the spot, referee Alioum jogged to the sidelines to check the VAR replays. He overturned the decision and canceled the penalty.

Making its debut at the African Cup, the VAR was also used in penalty decisions in both semifinals.

Algeria protected its lead for much of the game, allowing Senegal to dominate possession and push forward.

But Senegal couldn’t find the final touch, with its worst miss in the second half when Sarr blasted a volley over the crossbar from in front of Algeria’s goal.

Algeria’s celebrations at the end were boisterous, with thousands of supporters making the trip across to Egypt for the final. They took up almost half of one side of the stadium and were kept in check by rows of yellow-vested security personnel who stood facing them near the field.

During the celebrations, the Algeria squad and coach Belmadi kneeled down and prayed as they faced the supporters. Belmadi, who took over as coach less than a year ago, will return home a national hero.

Relief for Egypt after opening African Cup with win