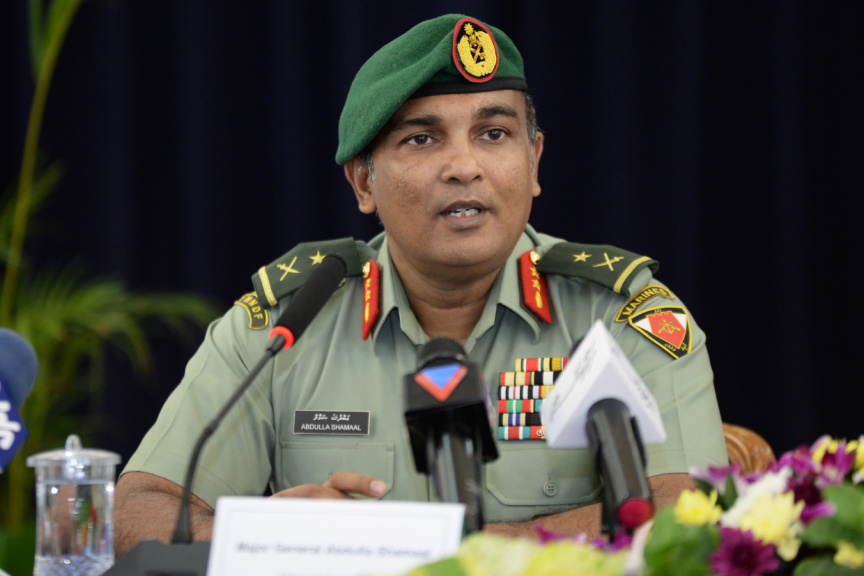 The Maldivian administration will not allow a foreign military base to be established in Maldives, says Chief of Defense Force, Major-General Abdulla Shamaal.

Shamaal made the remark in response to a question by a reporter during a press conference by senior officials of MNDF this Saturday morning.

The reporter asked Shamaal for a comment regarding reports the Uthuru Thila Falhu (UTF) naval base project is being contracted to India.

Shamaal said that the UTF naval base will increase the capacity of the Coastguard.

He said that the Indian government has indicated it will award grant assistance for the project, but said that reports UTF naval base will be an Indian base was false.

“I know for a fact that neither the Maldivian administration, nor the Maldivian military, nor the Defense Ministry is entertaining allowing the establishment of a military base of any foreign country in any part of Maldives,” said Shamaal.

“I want to be very clear on this point. I take this opportunity to provide assurance there is no plan to allow establishment of a foreign military base in Maldives, whether on a permanent basis, or temporary basis," he added.

Such collaborations are not new, said Shamaal.

Shamaal said that no foreign military base will be built in UTF, but will seek international assistance for “technical assistance and technical staff”.