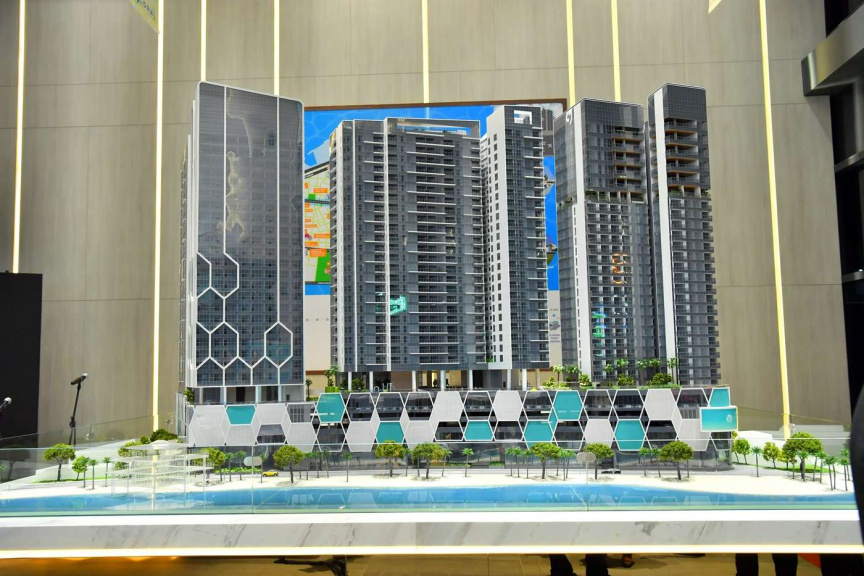 A model of of the luxury towers is displayed at the inauguration of the Coral Boulevard housing project on July 22, 2018. (File Photo/President's Office)

Coral Boulevard inaugurated its housing project to build four 28-floor-high towers with 500 luxury seafront view apartments near the Rasfannu Artificial Beach in Male’ City in July, 2018 – during former President Abdulla Yameen Abdul Gayoom’s administration. A part of the Rasfannu Artificial Beach was closed for construction and an initial 80 apartments opened for booking. Many set down millions as down payment for the apartments.

Following the overthrow of Yameen’s administration in late 2018, newly elected President Ibrahim Mohamed Solih announced the decision not to carry out any housing project in the congested capital.

With this major policy change, the new Maldivian administration instructed Coral Boulevard to relocate its project to Hulhumale’.

Some of the tenants who spoke to ‘Sun’ said that they have hit a stonewall in all their attempts to have their money returned. They said that the phone number of Coral Boulevard is out of service, and the office itself has been shut down.

“We signed the agreement to buy an apartment at the Rasfannu in Male’. Not anywhere else. The company needs to return our money since the apartments are not being built in Rasfannu anymore. No one from the company is available for contact anymore,” said one of the tenants.

The tenants include both Maldivian and foreign nationals.

Another tenant who spoke to ‘Sun’ said he sought the assistance of Maldives Police Service after he failed in his attempts to have his money returned. He said that he has now filed a lawsuit against Coral Boulevard as per the advice of the police.

“They took the money and fled. When we filed this case with the police, they advised us to go to the court. I have now filed a lawsuit with the court to have my money returned,” said the tenant.

‘Sun’ has been unable to contact Coral Boulevard for a comment regarding the allegations. The company’s phone numbers are out of service, and the office was closed down when ‘Sun’s reporters went to the address.

Housing Ministry previously announced that it was holding discussions with Housing Development Corporation (HDC) to allocate a land for Coral Boulevard to run its project.

Deputy Managing Director of HDC, Ahmed Athif reported to ‘Sun’ this Wednesday that the corporation is yet to allocate a land for the project.

Coral Boulevard in a subsidiary of Singapore’s Chang Hua Construction – which built the Dharumavantha Hospital.

The main company, Chang Hua Holdings, is currently involved in the resort development project for Radisson Blu Resort Maldives in A. Dh. Atoll.