Relief for host Egypt after opening African Cup with win 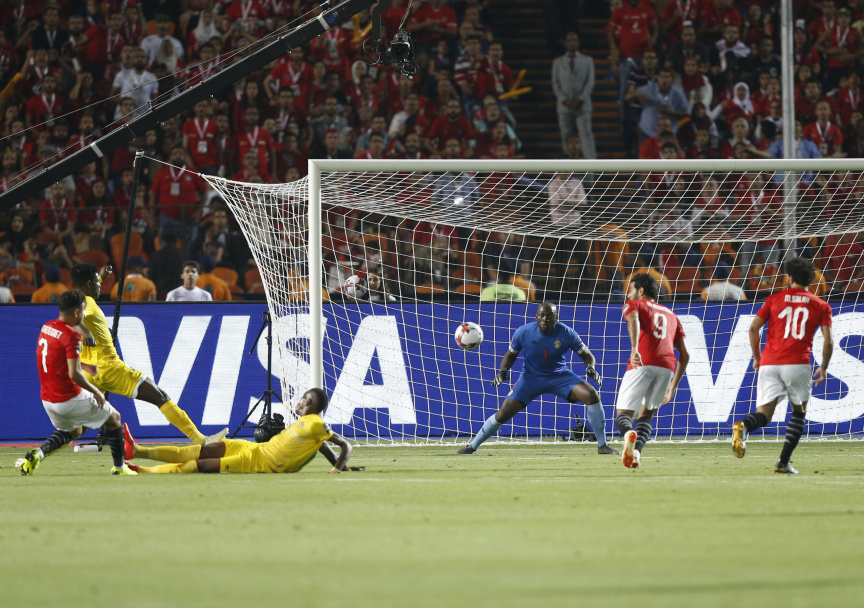 Egypt's Mahmoud Hassan, left, scores during the group A soccer match between Egypt and Zimbabwe at the Africa Cup of Nations at Cairo International Stadium in Cairo, Egypt, Friday, June 21, 2019. (AP Photo/Ariel Schalit)

Egypt opened the African Cup of Nations by beating outsider Zimbabwe 1-0 in Cairo on Friday, providing relief for Mohamed Salah, the host nation and the continent's soccer bosses.

Midfielder Trezeguet scored the goal just before halftime, when he weaved in from the left wing, played a one-two with Ayman Ashraf, wrong-footed two defenders and shot into the right corner of the net.

Egypt surged forward at the start but wasted chances and didn't find the Zimbabweans an easy proposition as the game wore on.

The misses didn't cost Egypt, which secured the opening victory it craved.

Trezeguet said the win was important, not the number of goals.

"We are trying to satisfy Egyptians by winning the title," he said.

There was relief, also, for organizers after the match went off without any serious problems. Egypt is hosting its first major sporting event since the 2011 uprising that toppled former president Hosni Mubarak and led to years of violence and civil unrest that is still being felt.

Egypt has put in place a vast security plan for the monthlong tournament, which is the first African Cup to be increased from 16 to 24 teams. The country is also battling an insurgency in the Sinai Peninsula and there was a bomb blast last month near the famous pyramids outside Cairo.

Mohammed Morsi, who replaced Mubarak as president but was then overthrown by the army, collapsed and died in a Cairo courtroom this week, putting the country further on edge.

Current President Abdel-Fattah el-Sissi, a former military general, attended the game and gave a speech before an opening ceremony that centered on replica pyramids standing on the field. The pyramids were lit up by laser lights and fireworks went off around them.

Egypt is hoping to focus the world's attention over the next month on its rich history rather than its recent troubles in an attempt to boost a tourism industry that has suffered during the turmoil.

There was also a picture of unity among Egyptians inside the packed Cairo International Stadium, which was at its 75,000 capacity. Fans stood together and waved red, white and black Egypt flags and held up posters of national hero Salah, one of them showing him wearing a slick tuxedo.

Salah was active in the opening minutes of the game, sending in a curling cross from the right that deflected off a defender's head, forcing Sibanda to dive to his right to save. Seconds later, Salah popped up on the left with another cross that was met by a looping header from Marwan Mohsen. Sibanda backpedalled and pushed the ball over the crossbar.

Sibanda injured his right leg in a clash with Mohsen early in the second half but played on for another 20 minutes before he was substituted. In that time he stopped a close-range shot from Salah, the first of two late opportunities for the Liverpool player.

Salah scored in the final and won the Champions League with Liverpool and now hopes for a joyous end to the season by helping Egypt back to the summit of African soccer on home soil.

Egypt is a record seven-time African Cup champion but won the last of its titles in 2010. The unrest affected the national soccer team, too, and it failed to even qualify for the next three tournaments. Salah helped lead Egypt back to the final two years ago, when it lost to Cameroon.

The African soccer body would have been glad that focus had reverted to the field.

FIFA announced on the eve of the continent's top tournament that it was stepping in to clean up the Confederation of African Football, which has been plagued by allegations of corruption and other misconduct against its president and is an organizational mess.

The president in question, Ahmad, sat next to FIFA head Gianni Infantino at the game. The two didn't appear to talk much.