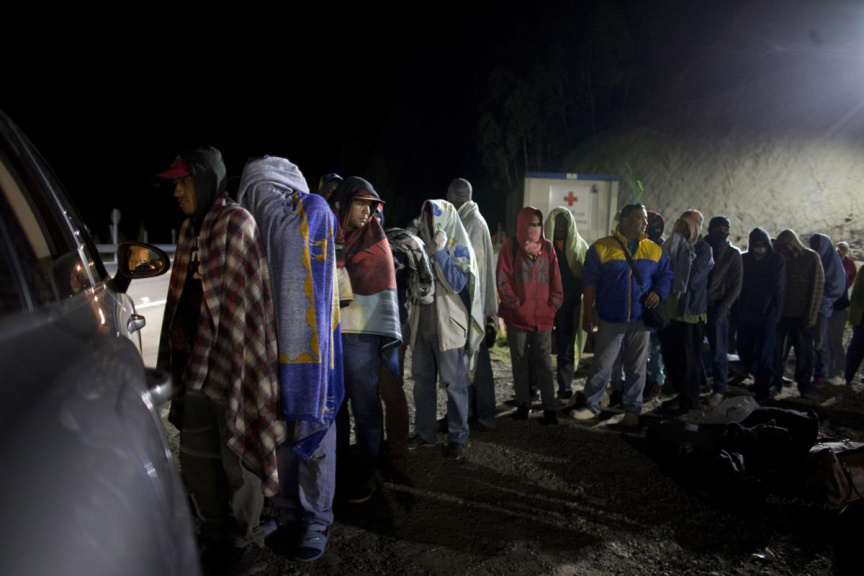 In this Aug. 31, 2018 file photo, Venezuelan migrants line up for free bread and coffee, donated by a Colombian family from their car, at a gas station in Pamplona, Colombia. (AP Photo/Ariana Cubillos)

GENEVA (AP) — A record 71 million people have been displaced worldwide from war, persecution and other violence, the U.N. refugee agency said Wednesday, an increase of more than 2 million from last year and an overall total that would amount to the world's 20th most populous country.

The annual "Global Trends" report released by the U.N. High Commissioner for Refugees counts the number of the world's refugees, asylum-seekers and internally displaced people at the end of 2018, in some cases following decades of living away from home.

The figures, coming on the eve of World Refugee Day on Thursday, are bound to add fuel to a debate at the intersection of international law, human rights and domestic politics, especially the movement in some countries, including the U.S., against immigrants and refugees.

Launching the report, the high commissioner, Filippo Grandi, had a message for U.S. President Donald Trump and other world leaders, calling it "damaging" to depict migrants and refugees as threats to jobs and security in host countries. Often, they are fleeing insecurity and danger themselves, he said.

The report also puts a statistical skeleton onto often-poignant individual stories of people struggling to survive by crossing rivers, deserts, seas, fences and other barriers, natural and man-made, to escape government oppression, gang killings, sexual abuse, militia murders and other such violence at home.

UNHCR said 70.8 million people were forcibly displaced at the end of last year, up from about 68.5 million in 2017 — and nearly a 65% increase from a decade ago. Among them, nearly three in five people — or more than 41 million people — have been displaced within their home countries.

"The global trends, once again unfortunately, go in what I would say is the wrong direction," Grandi told reporters in Geneva. "There are new conflicts, new situations, producing refugees, adding themselves to the old ones. The old ones never get resolved."

The phenomenon is both growing in size and duration. Some four-fifths of the "displacement situations" have lasted more than five years. After eight years of war in Syria, for instance, its people continue to make up the largest population of forcibly displaced people, at some 13 million.

Amid runaway inflation and political turmoil at home, Venezuelans for the first time accounted for the largest number of new asylum-seekers in 2018, with more than 340,000 — or more than one in five worldwide last year. Asylum-seekers receive international protection as they await acceptance or rejection of their requests for refugee status.

UNHCR said that its figures are "conservative" and that Venezuela masks a potentially longer-term trend.

Some 4 million people are known to have left the South American country in recent years. Many of those have traveled freely to Peru, Colombia and Brazil, but only about one-eighth have sought formal international protection, and the outflow continues, suggesting the strains on the welcoming countries could worsen.

Grandi predicted a continued "exodus" from Venezuela and appealed for donors to provide more development assistance to the region.

"Otherwise these countries will not bear the pressure anymore and then they have to resort to measures that will damage refugees," he said. "We are in a very dangerous situation."

The United States, meanwhile, remains the "largest supporter of refugees" in the world, Grandi said in an interview. The U.S. is the biggest single donor to UNHCR. He also credited local communities and advocacy groups in the United States for helping refugees and asylum-seekers in the country.

But the refugee agency chief noted long-term administrative shortcomings that have given the United States the world's biggest backlog of asylum claims, at nearly 719,000. More than a quarter-million claims were added last year.

He also decried recent rhetoric that has been hostile to migrants and refugees.

"In America, just like in Europe actually and in other parts of the world, what we are witnessing is an identification of refugees — but not just refugees, migrants as well — with people that come take away jobs that threaten our security, our values," Grandi said. "And I want to say to the U.S. administration — to the president — but also to the leaders around the world: This is damaging."

He said many people leaving Honduras, Guatemala and El Salvador through Mexico have faced violence by gangs and suffered from "the inability of these governments to protect their own citizens."

The UNHCR report noted that by far, the most refugees are taken in in the developing world, not wealthy countries.

The figures marked the seventh consecutive year in which the numbers of forcibly displaced rose.

"Yet another year, another dreadful record has been beaten," said Jon Cerezo of British charity Oxfam. "Behind these figures, people like you and me are making dangerous trips that they never wanted to make, because of threats to their safety and most basic rights."