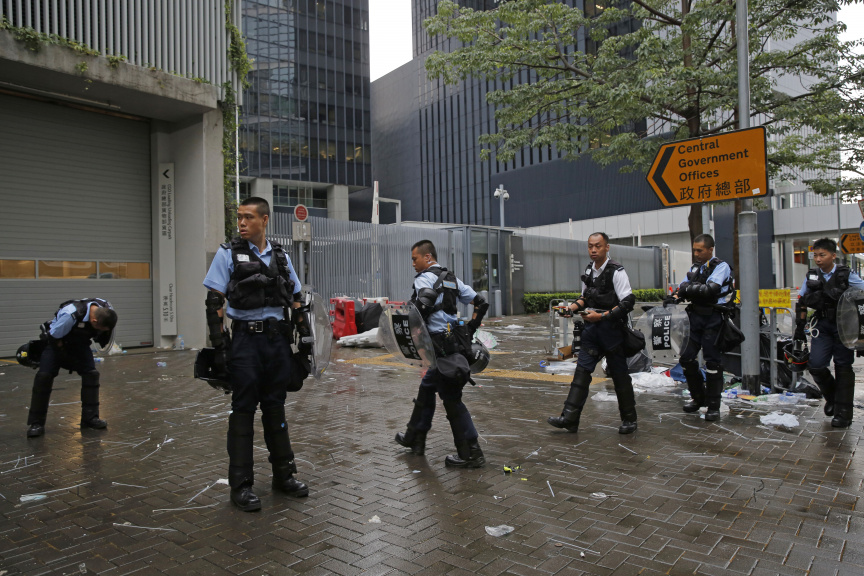 Riot police stand outside the Legislative Council in Hong Kong, Thursday, June 13, 2019. Traffic has been restored in the heart of Hong Kong a day after clashes between police and protesters who oppose legislation that would allow criminal suspects to be sent to mainland China for trial. (AP Photo/Kin Cheung)

HONG KONG (AP) — Traffic was restored in the heart of Hong Kong on Thursday following violent clashes the day before between police and protesters who oppose legislation that would allow criminal suspects to be sent to mainland China for trial.

The events in the former British colony mark possibly its biggest political crisis since its handover to Chinese rule in 1997, and pose a profound challenge to Chinese president and head of the ruling Communist Party Xi Jinping.

Nearly two years ago, Xi issued a stern address in the city stating that Beijing would not tolerate Hong Kong becoming a base for what the party considers a foreign-inspired campaign to undermine its rule. Yet the mostly young throngs of well-organized protesters seemed little deterred by such threats, even as they took pains to remain anonymous by wearing masks, declining to give their full names to journalists and using cash rather than stored value cards to buy subway tickets.

The demonstrations also follow the 30th anniversary of China's bloody suppression of the student-led pro-democracy protests centered on Beijing's Tiananmen Square on June 4, 1989. Hong Kong held one of its biggest rallies in recent years earlier this month to honor the hundreds or possibly thousands killed in the army assault and to demand a full investigation into the crackdown, in what was seen as a further sign of defiance against Beijing.

Xi's administration is also dealing with the trade war with the United States that has thrown its export-driven economic model into question, potentially threatening its relationship with China's urban middle class that has been predicated on accepting strict political controls in exchange for improving standards of living.

Heavy rain Thursday morning kept fresh protests from following those Wednesday by thousands of activists who shut down government headquarters and the Legislative Council on the day it was to debate the extradition bill. More than 70 people were hurt.

Protesters said they were seeking to block the passage of the legislation they see as part of Beijing's moves to tighten its grip over Hong Kong, which was promised the right to maintain its own political, economic and social institutions for 50 years following the end of British rule.