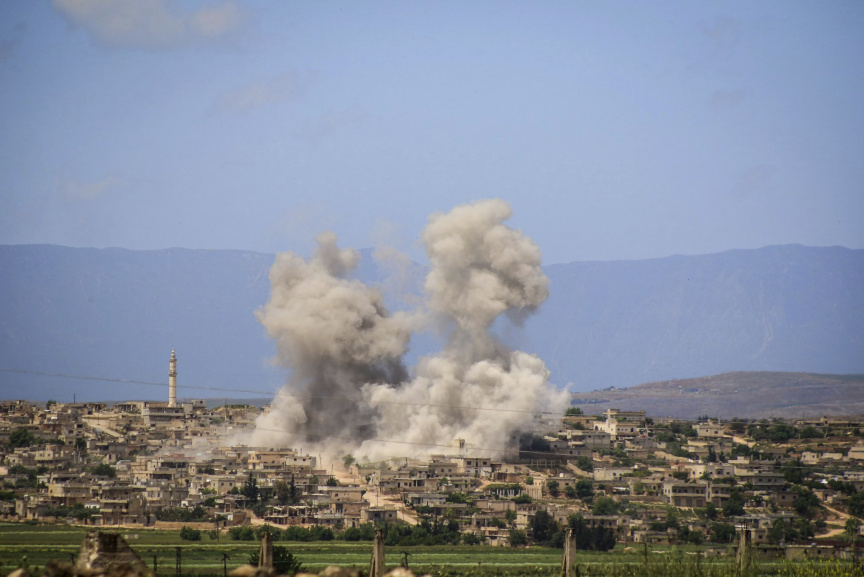 In this Tuesday, June 11, 2019, photo, North Koreans work in the field of their town of Kaepoong seen from the Unification Observation Post in Paju, South Korea, near the border with North Korea. North Korea on Wednesday, June 12 says it's actively fighting the spread of highly contagious African swine fever weeks after it reported an outbreak near its border with China. (AP Photo/Ahn Young-joon)

SEOUL, South Korea (AP) — North Korea said Wednesday it is actively fighting the spread of the highly contagious African swine fever weeks after it reported an outbreak near its border with China.

The North's official Rodong Sinmun newspaper said workers around the country were proceeding with "airtight" quarantine efforts to prevent the spread of the disease and ensure safety in livestock production.

African swine fever has decimated pig herds in China and other Asian countries. It's harmless to people but is fatal to pigs and has no known cure.

There's concern in South Korea that the outbreak in the North could spread across the border. Lee Sang-min, a spokesman for Seoul's Unification Ministry, which deals with inter-Korean affairs, said the North has yet to respond to calls for joint quarantine efforts.

The North Korean newspaper said quarantine efforts were focused on disinfecting farms and transport vehicles, restricting visitors, and banning the distribution of food products containing pork. The newspaper's references to nationwide quarantine efforts points to the possibility the disease has spread beyond the border area with China.

"At areas around the country, emergency quarantine efforts are being aggressively pushed to prevent the spread of the African swine fever, which is a highly contagious viral disease," the newspaper said.

South Korean officials say North Korea has not reported an additional case since it said the illness had occurred at a farm in Jagang province to the World Organization for Animal Health in late May. The North said 77 of the 99 pigs at the farm died of the disease and the remaining 22 pigs were culled.

But South Korean Unification Minister Kim Yeon-chul said in television interview on Sunday that the ministry was receiving unspecified "intelligence" that the disease was spreading to other areas in North Korea.

"It's difficult to accurately confirm (the spread of the disease), so there's a need for us to anticipate and prepare (for that possibility) to some degree," he said.

South Korean workers have tested pigs from some 340 farms near the inter-Korean border, with all those tests results negative, and also installed fences and traps to prevent livestock from being infected by wild boars that roam in and out of North Korea.

South Korea's military, which is monitoring the movement of wild boars through heat sensors installed along the border, said it would be difficult for wild boars to cross over barbed wire fences in the mine-scattered border zone. But officials say there's still a possibility that the animals could swim across rivers.

South Korea is also tightening control at harbors and airports, while imposing a 5 million won ($4,200) fine on travelers who fail to report food products containing pork after visiting countries dealing with African swine fever. Repeat offenders can be fined up to 10 million won ($8,470).