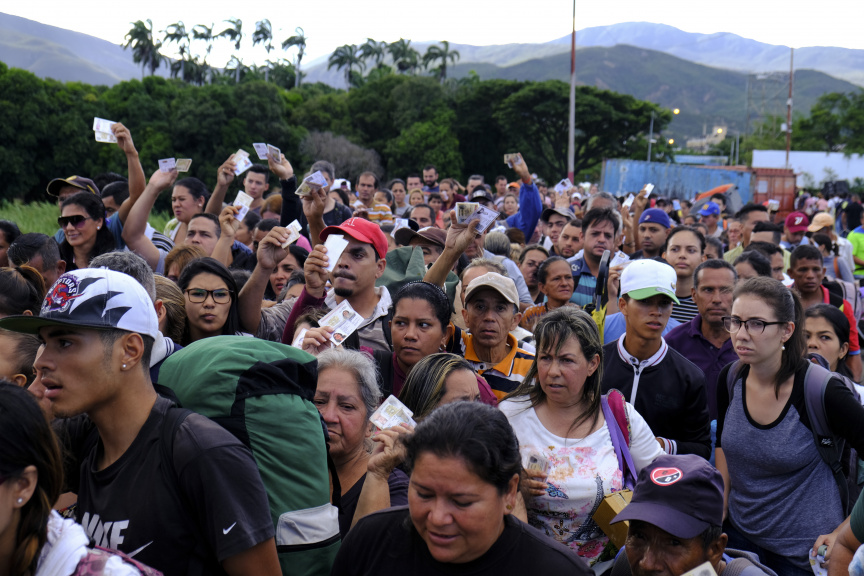 CÚCUTA, Colombia (AP) — Thousands of people crossed into Colombia on Saturday to buy food and medicine after Venezuelan President Nicolás Maduro reopened a border between the countries that had been shut down for the past four months.

Long lines of Venezuelans stood at two international bridges near the city of Cúcuta waiting to have their documents checked by Colombian officials, with some carrying children on their shoulders. Venezuelan border guards dressed in green uniforms helped control the crowd.

The South American nation's socialist government ordered the borders with Aruba, Bonaire, Curacao, Brazil and Colombia closed in February as the opposition tried to deliver food and medical supplies into the country.

Most of the aid was provided by the United States, a key ally of opposition leader Juan Guaidó who declared himself to be Venezuela's rightful president in January. But Maduro dismissed the aid as an infringement on Venezuela's sovereignty and prohibited it from entering.

With the reopening, a flood of people seized on the opportunity to enter into the neighboring country and secure items that are all but unattainable in Venezuela.

The once-wealthy oil nation is now facing severe shortages of basic goods and hyperinflation that is expected to surpass 10 million percent this year, according to a recent IMF estimate. The chaos has been further aggravated by U.S. sanctions on Venezuelan oil exports and has forced an estimated 5,000 people to leave the country each day, according to the United Nation's High Commissioner for Refugees.

The U.N. refugee agency said Friday that 4 million Venezuelans, or almost 15% of the population, have left the country.

On Saturday, the UNHCR's special envoy Angelina Jolie was visiting another part of the Colombia-Venezuela border to learn more about the conditions faced by migrants and refugees and raise awareness about their needs. The Hollywood actress met with aid workers and Venezuelans and toured a tent village built by UNHCR for vulnerable migrants.

Following her visit, Jolie gave a brief statement in which she praised Colombia for receiving more than 1.3 million Venezuelan migrants and refugees, and urged the leaders of developed countries to do more to help displaced people around the world.

"Looking across the word it seems that those who have the least, are those that often give the most" Jolie said. "Instead of focusing on how to address the gap in diplomacy and security and peace that is causing growing numbers of people to move, we hear increasing talk of what individual governments are not prepared to do."

Jolie said that UNHCR is struggling to fund services for Venezuelan migrants and refugees. In December, the agency launched a $738 million plan to assist displaced Venezuelans across the hemisphere, but it has only been able to raise a fifth of that money so far.

Earlier on Saturday, Jolie met with Colombia President Ivan Duque, who has pledged to keep his country's border with Venezuela open despite the large influx of migrants.

Duque said that during the meeting with Jolie and UNHCR officials, both sides discussed steps that could be taken to facilitate the integration of Venezuelans in Colombia, including legislation to grant Colombian nationality to thousands of children of Venezuelan migrants who have been born in Colombia and are currently stateless.

Duque said that granting these children citizenship would be a "humanitarian way to give them the opportunities and benefits" that will enable them to emerge out of poverty.

Colombia's National Civil Registry counts at least 3,290 children born since December 2017 who have been unable to obtain citizenship. Rights groups say the numbers could be as high as 25,000.