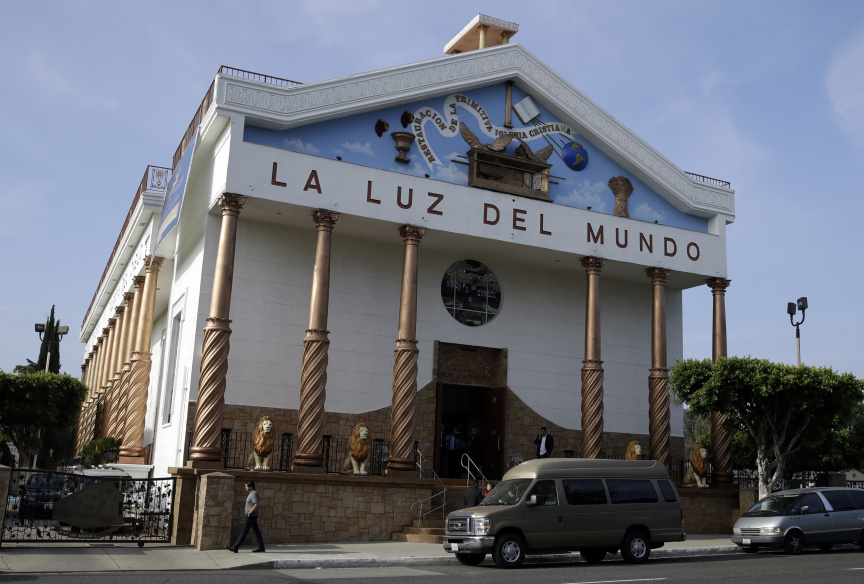 The exterior of a La Luz del Mundo church branch is seen Thursday, June 6, 2019, in Los Angeles. California's top prosecutor said Thursday that he believes there are more victims of child sex abuse than those listed in charges against the leader of Mexico-based megachurch La Luz del Mundo and several followers. (AP Photo/Marcio Jose Sanchez)

LOS ANGELES (AP) — Remarks by the California attorney general regarding the arrest of the leader of a Mexico-based megachurch charged with human trafficking and child rape may have tainted a potential jury, defense attorneys said Friday.

"No law of California, no law of humankind and certainly no law of God would permit to occur what Naasón Joaquín García is alleged to have committed in this case against young girls and others," Becerra said.

"Yesterday was a sad day for the criminal justice system in California," Sawyer said." ''How is Mr. García's supposed to get a fair trial?"

Joaquín García and two co-defendants were arrested in California this week, and a fourth remains at large. They face a 26-count felony complaint that alleges crimes including child rape, statutory rape, molestation, human trafficking, child pornography and extortion.

Becerra disputed the lawyers' claims, saying in a statement Friday evening that "while we are going to vigorously prosecute this case, these defendants are presumed innocent unless and until proven guilty."

Joaquín García was originally being held on bail of $25 million, but that amount was increased to $50 million — believed to be the largest ever set in Los Angeles County — after prosecutors argued the church's millions of followers could raise the money and free Joaquín García, who they say might flee the country.

Rosenfeld and Sawyer say Joaquín García and his family are paying their legal fees and the evangelical church's finances are not involved. The lawyers spoke Friday at a bilingual press conference outside an east Los Angeles temple of La Luz del Mundo with Joaquín García's family and church followers standing beside them.

"We will return the apostle to his flock," Rosenfeld said. "Five million faithful stand behind a wrongly accused man."

The three defendants in custody made their first court appearance in Los Angeles on Wednesday. They did not enter pleas. They will return to court Monday for arraignment.

Joaquín García was originally represented by Dmitry Gorin and Alan Eisner. But he has since changed his lawyers to Rosenfeld and Sawyer, who said the other lawyers only handled the first appearance.

Sawyer was counsel to former Stockton Mayor Anthony Silva, who pleaded no contest last month to a conflict of interest charge after prosecutors dropped other financial malfeasance counts, the Stockton Record reported.

The attorneys said high-profile figures can often be targeted with false accusations. Rosenfeld said Joaquín García is the "victim of technology, a high-tech hit job."

Some of the allegations appear to be documented by electronic evidence, but his client's "identity has been assumed online at times," Sawyer told The Associated Press Friday afternoon.

"There's a lot of further investigation that needs to occur," he said.

The case's complaint does not mention the use of technology besides the production and distribution of child pornography.

Trump answers rebuke of border plan with a veto