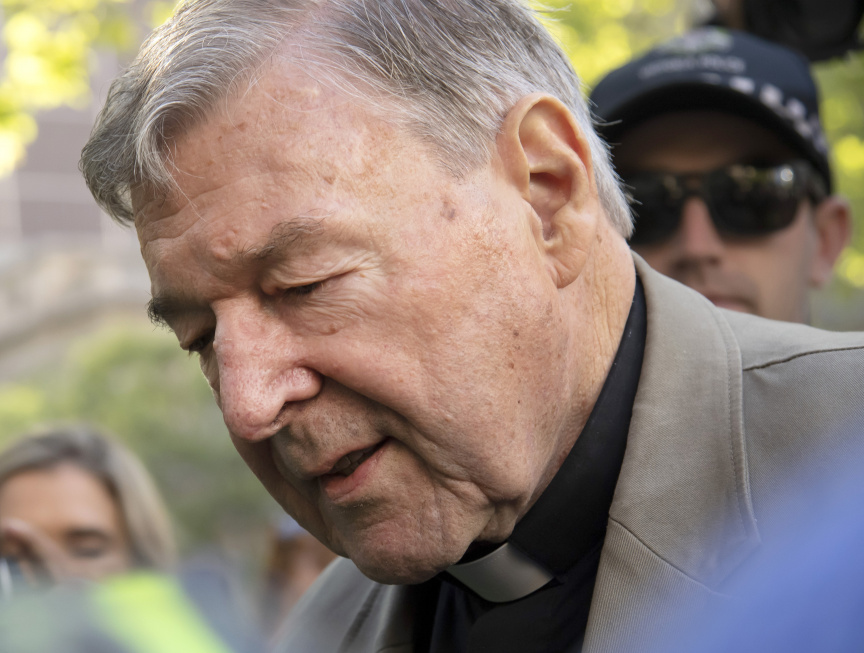 FILE - In this Feb. 27, 2019, file photo, Cardinal George Pell arrives at the County Court in Melbourne, Australia. Pell, the most senior Catholic convicted of child sex abuse will soon ask an Australian appeals court to reverse convictions on charges of molesting two choirboys in a cathedral more than 20 years ago. (AP Photo/Andy Brownbill, File)

MELBOURNE, Australia (AP) — Prosecutors argued in an Australian court on Thursday that child sex convictions against a Roman Catholic cardinal should not be overturned and said his accuser had been a compelling witness.

Cardinal George Pell, 77, is the most senior Catholic to be convicted of children sex abuse and is appealing those guilty verdicts in the Victoria state Court of Appeal. He attended the hearing for a second day, wearing a cleric's collar and occasionally taking notes.

Prosecutor Chris Boyce told the three appeal judges that the convictions largely based on the testimony of a single accuser should stand.

"The complainant was a very compelling witness," Boyce said. "He was clearly not a liar, not a fantasist."

A jury unanimously convicted Pope Francis' former finance minister in December of orally raping a 13-year-old choirboy and indecently dealing with the boy and the boy's 13-year-old friend in Melbourne's St. Patrick's Cathedral in December 1996. Pell had become archbishop of Melbourne, Australia's second-largest city, only months before.

One of the boys, now aged in his 30s, is the key prosecution witness. The other died or a heroin overdose in 2014, apparently without ever alleging he had been abused. State law prohibits identifying either victim.

Pell was also convicted of an act of indecency against the complainant by squeezing his genitals as they passed in a cathedral corridor in early 1997.

Boyce said the complainant spent more than eight hours in the witness box and underwent "searing" cross examination during Pell's original trial in the Victoria County Court that ended with a deadlocked jury in September last year.

"If it was a fantasy, at some point you'd expect the cracks to appear," Boyce said.

A second jury convicted Pell after watching a video of the complainant's testimony. The appeal judges will also watch the same testimony.

Boyce told the judges they need not consider why at least two jurors in Pell's original trial were not convinced beyond reasonable doubt of his guilt.

Boyce used as an example of the complainant's credibility his walkthrough with police in the priests' sacristy where he said he had been abused.

The complainant said he and his friend had been abused near the doorway from which Pell had entered.

Prosecutors argued that only a madman would take the risk of abusing two boys near an open sacristy door after Mass when someone would walk in within minutes.

Boyce told the judges they would have seen during their own inspection of the cathedral sacristy there was a concealed alcove that would have made a more likely setting for the crime.

"If he were a liar or a fantasist, it could be so easy to put it into that alcove area," Boyce said.

Pell was sentenced in March to six years in prison. He is held in special protective custody because pedophiles are regarded as being at higher risk of harm from other prisoners.

While Pell remains Australia's highest-ranking Catholic, the Vatican is conducting its own investigation into his convictions.

Francis' papacy has been thrown into turmoil by clerical sexual abuse and the church's handling of such cases worldwide. In a little more than a year, the pope has admitted he made "grave errors" in Chile's worst case of cover-up, Pell was convicted of abuse, a French cardinal was convicted of failing to report a pedophile, and a third cardinal, former U.S. church leader Theodore McCarrick, was defrocked after a Vatican investigation determined he molested children and adults.

Pell's lawyer Bret Walker had told the court on Wednesday that Pell could not have molested the two boys and argued the five verdicts against Pell were "unsafe and unsatisfactory" and should be overturned.

The judges say they have to through more evidence from the trial before issuing their ruling on Pell's appeal. Whichever way the court rules, the case could reach the High Court, Australia's ultimate arbiter.

If the judges rule that the verdict is unsafe on the evidence, Pell would be acquitted. If they rule there was an irregularity in his arraignment, another of the grounds cited in his appeal, he could be retried. If that happens, he would likely be freed on bail until his third trial.

Defense in trial of China scholar's death: He did it