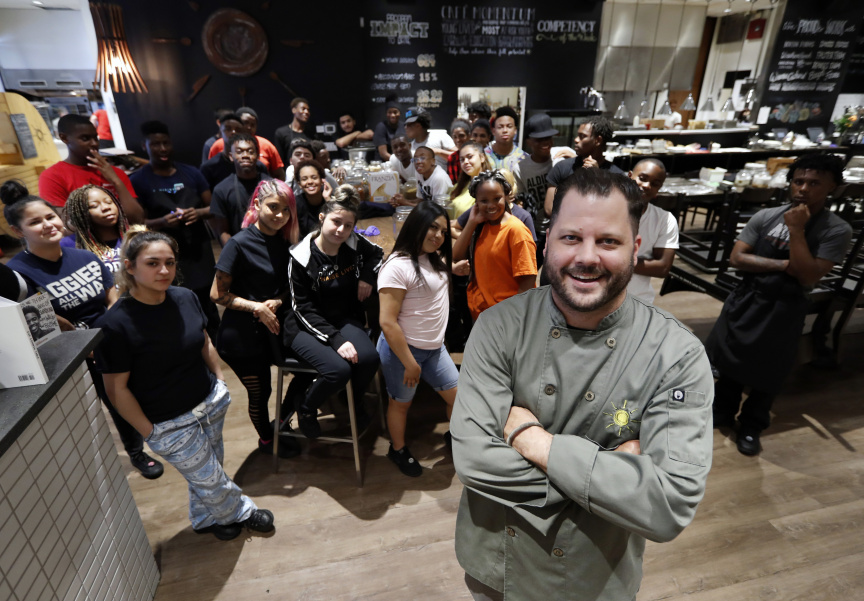 FILE - In this May 22, 2012, file photo, Charles Koch speaks in his office at Koch Industries in Wichita, Kan. If a billionaire's approach to philanthropy is a reflection of himself, Koch's latest initiative tackling poverty embodies both the wealthy industrialist's business acumen and the GOP political icon's distaste for big government. (Bo Rader/The Wichita Eagle via AP, File)

SEATTLE (AP) — If a billionaire's approach to philanthropy is a reflection of himself, Charles Koch's latest initiative tackling poverty embodies both the wealthy industrialist's business acumen and his distaste for big government.

The 3-year-old Stand Together Foundation has lately taken center stage in the Koch empire, which has been recalibrating some of its wide-ranging operation that is both villainized and revered by the American public. The shifting strategy comes as the GOP icon's sprawling network of rich donors, powerful political groups and various tax-exempted advocacy organizations continues to downplay its more well-known but controversial political agenda, which has pumped hundreds of millions of dollars into shaping U.S. elections and policy debates.

In 2018, for example, most of the Stand Together's $30 million budget went to pay for nonprofit grants. Also last year, Koch pledged to spend $400 million on politics and policy, with much of its midterm elections spending focused on helping conservative candidates. Koch's political arm, Americans for Prosperity as the most prominent affiliate, also is widely known for supporting the Tea Party movement and fighting to overturn President Barack Obama's health care expansion.

Cast by Democrats as a dark-money force in GOP politics, Koch is redirecting his public focus on innocuous charity work and leaning deeper into the traditional philanthropy model of giving grants to benefit local community organizations. A key part of this foray is infusing the work of private nonprofits with corporate principles and business management training. Koch also gives the charities grant money and extends his influence to help them expand.

"We are trying to increase the efficacy and drive more results in the philanthropic sector, so it's been a great experience working with Koch Industries and the business leaders in this network to bring that for-profit mindset to the social sector," said Lauren McCann, executive vice president of the Stand Together Foundation.

The 140 private groups that Koch supports in Stand Together generally share a central mission to help the needy with a path toward self-sufficiency, rather than charitable handouts.

Some of Stand Together's most prominent grantees claim that free from onerous restrictions, they're privately doing social work better than the public government safety net.

The foundation's model stands out in the burgeoning big-ticket philanthropy landscape. Aaron Dorfman of the National Committee for Responsive Philanthropy said he knows of no other program like Koch's intensive six-month training designed to coach nonprofit leaders on business principles.

But as president of the philanthropy watchdog group, Dorfman remains skeptical of Koch's intentions. He said supporting private organizations that claim superiority over the way government functions is an affront to the nation's system of taxation and spending. Dorfman, a former community organizer, also is a longtime critic of the Kochs' other tax-exempted advocacy work for advancing their business and political agendas.

"It's hard to be too enthusiastic about one stand-alone initiative. Their influence on our society, on balance, it is for sure mostly bad for poor people," Dorfman said, citing examples such as Koch's efforts to fight environmental regulations and public transit proposals.

McCann says the foundation appreciates the government's role in social services and the Koch grants aren't tied to any political objectives, though there are some overlapping interests with its agenda, such as prison reform and school choice.

She also said Koch's name and reputation have at times preceded Stand Together's budding body of work, and the foundation has had to prove itself to skeptical nonprofit boards in the minority communities it seeks to help.

"We talk about our values of openness and equal rights and toleration, and sometimes you can see people are processing and, you know, confused," McCann said.

Chad Houser, founder and executive chef at Café Momentum, said Stand Together's Catalyst Network training helped his nonprofit outline its vision, which included changes to its governing board. He said the lessons are a refreshing turn not seen in other nonprofit development programs and have given him the freedom and skills to run his restaurant like a business rather than a charity.

"If I never had to go out and beg for money ever again and could just focus on the kids, it would be so amazing," Houser said.

Among the more than 750 young people the nonprofit has worked with, only 15 percent have returned to jail, compared with Texas' 48 percent recidivism rate for the same age group, according to Houser. He said starting and sustaining the restaurant and job training program has cost about $4 million, but it has saved Dallas taxpayers $30 million in its juvenile justice system.

Café Momentum has received $700,000 in grant money from Stand Together. In April, Koch also flexed its influence to create a donations-matching campaign supported by the National Football League that will benefit Café Momentum with an eye toward expanding its model into other cities.

The workers at the popular, money-making restaurant are paid, and Houser's staff also takes on social worker duties, helping them with essential needs from housing to family issues.

Kaileigh Johnson said her previous job at a government-funded agency was heavily institutionalized with too many rules, and pales in comparison to her work now as a Café Momentum case manager.

That's all central to Koch's latest campaign to establish himself as a major philanthropic player and shed some of the political associations tied to the former "Koch Brothers" entity. Younger brother David Koch, who retired in 2018 due to health issues, was the Libertarian Party's vice presidential candidate in 1980.

This shift was evident at Charles Koch's biannual private retreat in January, when Stand Together was spotlighted in front of hundreds of donors who each contribute at least $100,000 annually to the network's wide-ranging agenda.

And in May, the entire Koch umbrella reorganized, adopting the "Stand Together" heading for the overarching organization that was previously known as the "Seminar Network," which has encompassed other prominent groups such as Freedom Partners and the LIBRE Initiative.

"Stand Together is a call to action to social entrepreneurs across the country, and that's what we've become," said Brian Hooks, who as Koch's top lieutenant is chairman and CEO of the entire network. "For too many years, we've let people define who we are, and now we're defining ourselves."

‘Too many are selfish’: US nears 5 million virus cases