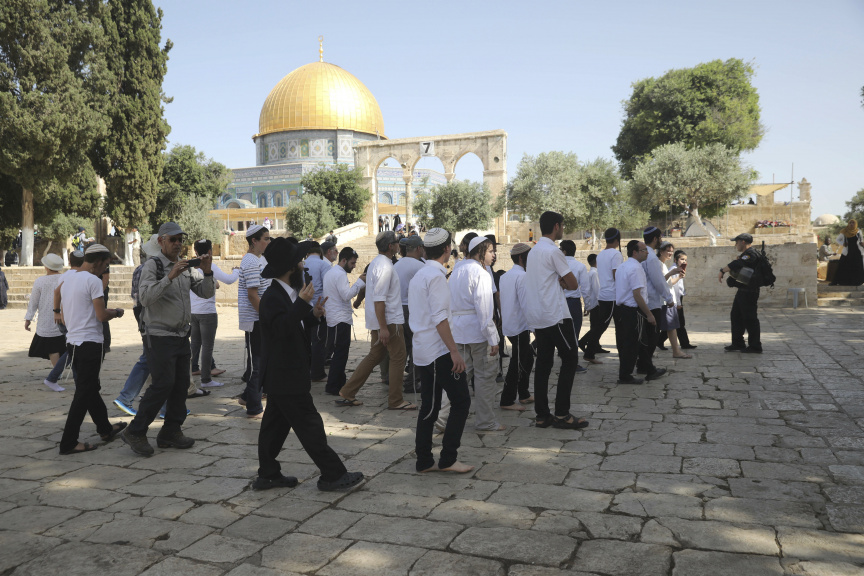 JERUSALEM (AP) — Thousands of Israeli religious nationalists paraded through the streets of Jerusalem and into the main entrance of the Old City's Muslim Quarter to mark Jerusalem Day, an Israeli holiday celebrating Israel's capture of the area in the 1967 Mideast war.

Israeli police mobilized thousands of officers and deployed them along the parade route, which runs through the heart of Palestinian east Jerusalem on its way to the Western Wall, the holiest site where Jews can pray. Police said forces were on high alert to prevent possible violence.

Further complicating matters, this year was the first time since 1988 that the parade coincided with the Muslim holy month of Ramadan, which is based on a lunar calendar and is celebrated at a different time each year.

The parade made its way through the Damascus Gate just before sundown, when Muslim faithful readied to break their daylong fast.

Israel captured east Jerusalem from Jordan in the 1967 Mideast war and later annexed it, a move unrecognized by most of the international community. The city and its sites holy to Muslims, Christians and Jews are the emotional epicenter of the Israeli-Palestinian conflict.

Last year President Donald Trump recognized Jerusalem as Israel's capital. Although Trump said the move was not meant to determine the city's final borders, it nonetheless enraged Palestinians, who seek east Jerusalem as the capital of a future state.

Amid the festivities, Israel's state comptroller's office published a report Sunday that underscored serious shortcomings by Jerusalem city hall: from public squalor and failure to protect historic buildings, to severe neglect of the city's Palestinian residents.

The incident came after Israeli nationalists visited the contested site, revered by Jews as their holiest site, where two ancient temples stood, and by Muslims as third holiest in Islam, home of the Al-Aqsa Mosque.

On Friday, police said a Palestinian stabbed two Israelis in the Old City before being killed.