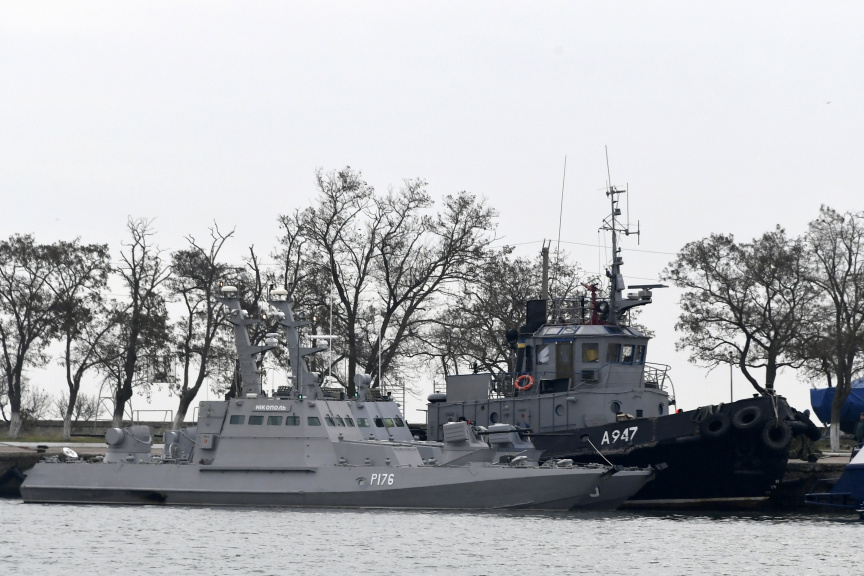 In this Monday, Nov. 26, 2018 file photo, three Ukrainian ships are docked near the Kerch after been seized on Sunday, in Kerch, Crimea. (AP Photo, File)

The International Tribunal for the Law of the Sea issued its order at its Hamburg headquarters following a hearing earlier this month. Russia stayed away from both the hearing and Saturday's session.

Ukraine's new president, Volodymyr Zelenskiy, said that Russia could send a signal of "real readiness to stop the conflict with Ukraine" by complying with the order. Russia didn't immediately specify what it would do, but made clear that it still believes the tribunal is the wrong place to address the dispute.

The confrontation in the Kerch Strait, which links the Sea of Azov with the Black Sea, marked a flashpoint in the simmering conflict over Russia's 2014 annexation of the Crimean Peninsula. Russia seized Crimea in a move that Ukraine and most of the world view as illegal. The Kerch Strait separates Crimea from mainland Russia.

Russia had argued that the rights Ukraine claims in the case don't apply because they are covered by an exception for military activity.

The tribunal sided with Ukraine's argument on that point. But tribunal President Jin-Hyun Paik said both parties should "refrain from taking any action which might aggravate or extend the dispute."

He said Russia must return the ships to Ukrainian custody and allow the servicemen to go home. The decision was a 19-1 vote, with a Russian judge dissenting.

The tribunal "does not consider it necessary to require (Russia) to suspend criminal proceedings against the 24 detained Ukrainian servicemen and refrain from initiating new proceedings," Paik added. Kiev had called for legal proceedings to be ended.

The tribunal's decisions are legally binding, but it has no power to enforce them. It called for both sides to report back on their compliance by June 25.

Zelenskiy said when he took office on Monday that the main goal of his presidency is to bring peace to eastern Ukraine, where government troops have been fighting Russia-backed separatists for five years in a conflict that has left at least 13,000 dead.

On Saturday, Zelenskiy said on Twitter that "Russia's fulfillment of the order ... could be a first signal from the side of the Russian leadership of real readiness to stop the conflict with Ukraine. In this way, Russia could take a step toward unblocking talks and resolving in a civilized way problems that it created."

"We'll see what path the Kremlin will choose," he added.

The Russian Foreign Ministry didn't address details of the order to release the ships and sailors. It underlined in a statement its argument that the U.N. Convention on the Law of the Sea's dispute resolution procedures can't be applied to this dispute.

In subsequent arbitration proceedings at the tribunal, "we intend to consistently defend our position, including the lack of jurisdiction," it said.