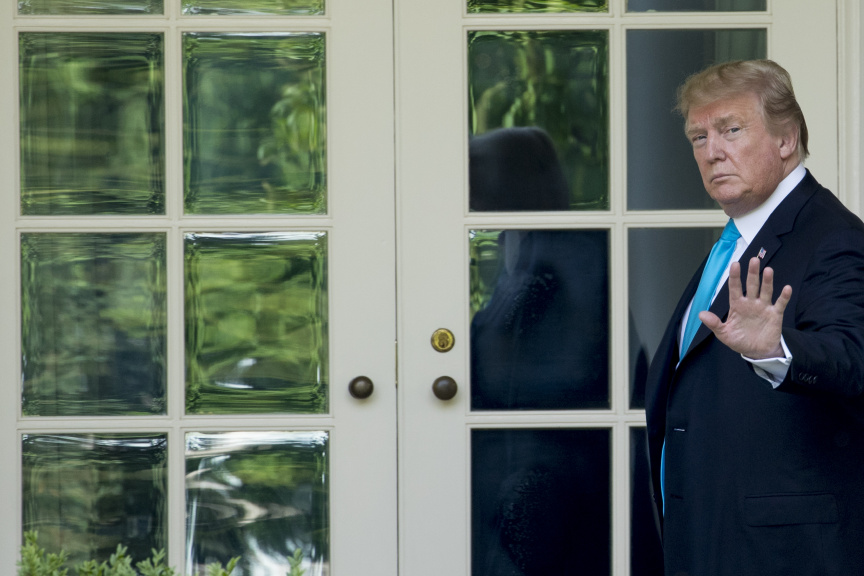 President Donald Trump waves as he walks towards the Oval Office in Washington, Thursday, May 23, 2019, after visiting the annual Flags In ceremony at Arlington National Cemetery. (AP Photo/Andrew Harnik)

Secretary of State Mike Pompeo notified Congress of the decision to use an emergency loophole in the Arms Export Control Act to move ahead with sales of $7 billion in precision guided munitions, other bombs and ammunition and aircraft maintenance support to Saudi Arabia, along with the United Arab Emirates and Jordan, without lawmakers' approval.

In his notification, Pompeo said he had made the determination "that an emergency exists which requires the immediate sale" of the weapons "in order to deter further the malign influence of the government of Iran throughout the Middle East region." He said the transfers "must occur as quickly as possible in order to deter further Iranian adventurism in the Gulf and throughout the Middle East."

Pompeo's move follows President Donald Trump's announcement that the U.S. plans to send 1,500 additional U.S. troops to the Middle East as part of a build-up in response to an unspecified threat from Iran.

It also comes as the administration has actively courted close ties with Saudi Arabia over congressional objections, notably following the killing of Jamal Khashoggi , a U.S.-based columnist for The Washington Post, by Saudi agents in October.

Khashoggi's slaying, coupled with increasing concerns about civilian casualties resulting from a Saudi-led coalition's military operation against Iran-backed Houthi rebels in Yemen, prompted lawmakers to block about $2 billion in arms sales to the kingdom for more than a year. Last month, Trump vetoed legislation that would have ended U.S. military assistance for the Saudi-led war in Yemen.

Sen. Bob Menendez of New Jersey, the top Democrat on the Senate Foreign Relations Committee, said the administration did not cite a specific legal or practical reason for using the loophole other than Iran.

"I am disappointed, but not surprised, that the Trump administration has failed once again to prioritize our long term national security interests or stand up for human rights, and instead is granting favors to authoritarian countries like Saudi Arabia," Menendez said in a statement.

Sen. Chris Murphy, D-Conn., who earlier this week warned against bypassing Congress, said the administration was only declaring an emergency because lawmakers would have blocked the transfers.

"President Trump is only using this loophole because he knows Congress would disapprove of this sale," Murphy said. "There is no new 'emergency' reason to sell bombs to the Saudis."

The law requires Congress to be notified of potential arms sales, giving the body the opportunity to block the sale. But the law also allows the president to waive that review process by declaring an emergency that requires the sale be made "in the national security interests of the United States."

Menendez and Murphy said they would challenge the decision but it was not immediately clear how they might do that.

"With this move, the president is destroying the productive and decades-long working relationship on arms sales between the Congress and the executive branch," Menendez said. "The possible consequences of this decision will ultimately threaten the ability of the U.S. defense industry to export arms in a manner that is both expeditious and responsible."

The chairman of the Foreign Relations Committee, Republican Sen. Jim Risch of Idaho, said he was "reviewing and analyzing the legal justification for this action and the associated implications."

There is precedent for using the emergency exemption for arms sales to Saudi Arabia. President Ronald Reagan invoked it in the 1980s and both Presidents George H.W. Bush and George W. Bush used it for sales before the 1991 Gulf War and the 2003 Iraq war.

US man who kidnapped Jayme Closs gets life in prison