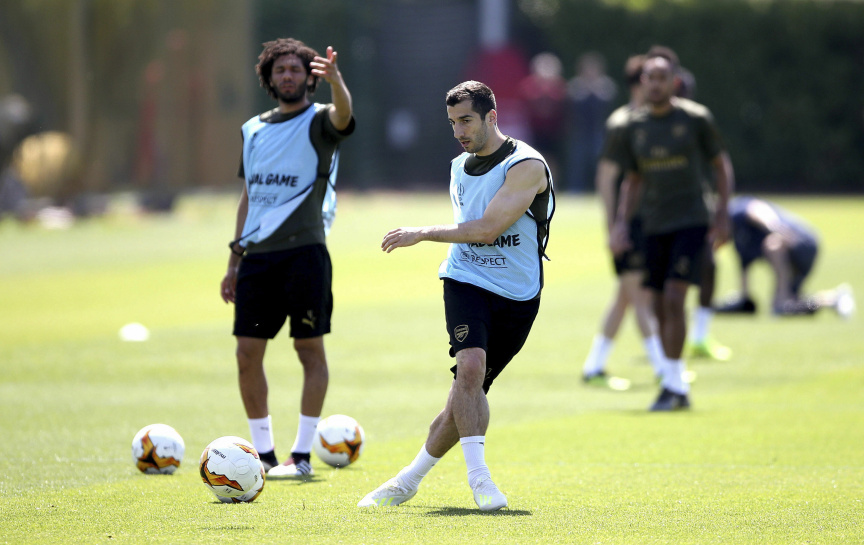 Arsenal's Henrikh Mkhitaryan during a training session at London Colney, England, Tuesday May 21, 2019, ahead of the Europa League Final against Chelsea on Wednesday May 29. (Tim Goode/PA via AP)

The choice of Baku as host of the Europa League final provided Arsenal with further grounds for discontent Tuesday when one of the team's most talented players pulled out of the game for political reasons.

After holding lengthy talks with Arsenal, Henrikh Mkhitaryan said he would not be traveling to Azerbaijan for next week's final because of concerns about the tension that currently exists between the country and his native Armenia.

"It's the kind of game that doesn't come along very often for us players," Mkhitaryan said on his social media channels, "and I must admit, it hurts me a lot to miss it."

UEFA, European soccer's governing body which organizes the Europa League, reacted by saying it had received assurances about Mkhitaryan's safety in Azerbaijan "from the highest authorities in the country" and that a "comprehensive security plan" had been given to Arsenal.

And the Azerbaijan government had previously said it would allow Mkhitaryan to play in the May 29 final against Chelsea.

The Association of Football Federations of Azerbaijan called it an "unwarranted decision" by Mkhitaryan and Arsenal, saying there was "no reason whatsoever to put in question the seriousness of these guarantees provided by Azerbaijan."

"We at all times put the sport as something very separate from these political issues and of course the same issue is again with Mkhitaryan," Azerbaijan Sports Minister Azad Rahimov said last week.

Arsenal has already criticized the decision to give Baku the final, having received — like Chelsea — only 6,000 tickets by UEFA and because of what the club says are "extreme" problems that fans face just getting to the match.

There are relatively few flights to Baku from Western Europe, though more are being operated for the final, and prices are far above usual levels.

Arsenal said in a statement it has "written to UEFA expressing our deep concerns about this situation" involving Mkhitaryan, who has missed previous group games in Azerbaijan for both Arsenal and former club Borussia Dortmund.

"Micki has been a key player in our run to the final," Arsenal said, "so this is a big loss for us from a team perspective."

"If there were sufficient guarantees of security from the Azerbaijani side to satisfy both Henrikh Mkhitaryan and his team, then the Armenian Foreign Ministry does not see problems with Mkhitaryan playing in Baku," the ministry said.

After Mkhitaryan said he wouldn't travel, Azerbaijan's foreign ministry said it had assured his safety, and accused Armenia of manipulating the situation.

"The Armenian Foreign Ministry statement that player of Armenian heritage at the Arsenal football club will not come to Baku is evidence of an attempt to turn sport into a political instrument because of internal political problems in Armenia," ministry spokeswoman Leyla Abdullayeva said.

Mkhitaryan wouldn't have been a guaranteed starter for Arsenal manager Unai Emery, who often plays only one of his playmakers — Mesut Ozil and Mkhitaryan — each match. Mkhitaryan didn't start, for example, either of the quarterfinal matches against Napoli or either of the semifinal legs against Valencia.

He is dangerous player to come off the bench, though, with his vision and creative ability.

Arsenal will be playing its first European final in 13 years and looking to win its first continental trophy since the 1994 European Cup Winners' Cup. The game has even greater importance because Arsenal needs to win to secure qualification to the Champions League after missing out on a top-four finish in the Premier League.

Tensions between Azerbaijan and Armenia have spilled into European soccer tournaments since the neighbouring nations were drawn together in a qualifying group for the 2008 European Championship.

Both games were eventually cancelled, after Azerbaijan refused to host Armenia and no agreement could be reached on neutral venues.

UEFA has since separated the countries in its competition draws ensuring that their national and club teams do not play each other.

Baku won the Europa League final hosting rights in a bidding contest that originally included Seville, Spain, and Istanbul. Seville was excluded because Madrid was awarded the Champions League final, which will be played on June 1.

UEFA evaluated each bidder, though a subsequent report did not mention the Armenia issue in a section analyzing security issues for Baku.

Arsenal's then-chief executive, Ivan Gazidis, was on the UEFA executive committee when Baku was chosen as Europa League host in September 2017. Mkhitaryan was then with Manchester United, playing in the Champions League, and joined Arsenal the following January.