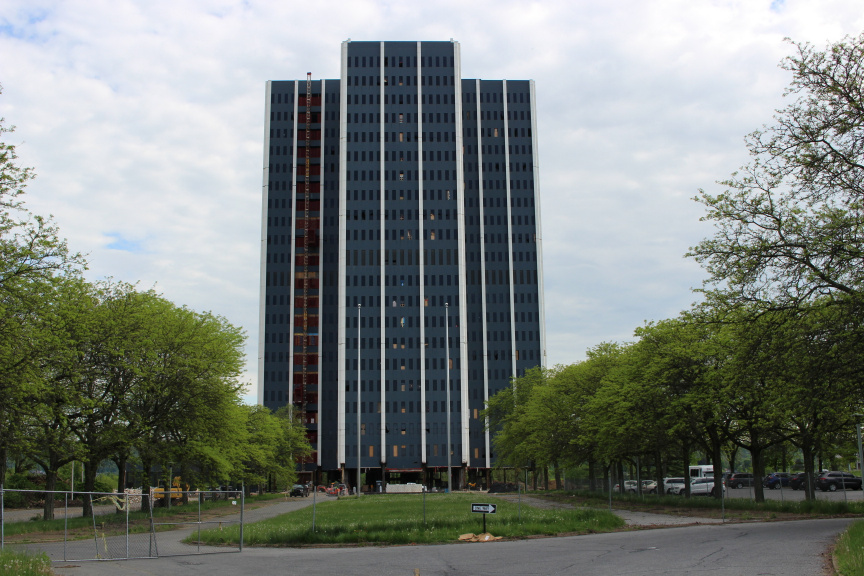 This May 8, 2019, photo shows Martin Tower in Bethlehem, Pa. The 21-story building, the former global headquarters of defunct steelmaker Bethlehem Steel Corp., is set to be imploded on May 19, 2019. (AP Photo/Michael Rubinkam)

BETHLEHEM, Pa. (AP) — Sixteen thousand tons of Bethlehem Steel is due to collapse in a matter of seconds as a demolition crew imploded Martin Tower, the defunct steelmaker's former world headquarters.

Crowds are expected on Sunday to watch the demolition of the area's tallest building, a 21-story monolith that opened at the height of Bethlehem Steel's power and profitability. America's second-largest steelmaker went out of business in 2003.

Explosives will take out Martin Tower's steel supports and crumple the 47-year-old building, which has earned a spot on the National Register of Historic Places despite its relatively young age.

Martin Tower had been vacant for a dozen years. Its owners are redeveloping the site into a mix of medical offices, stores and apartments.

US officials estimate 20M Americans have had virus