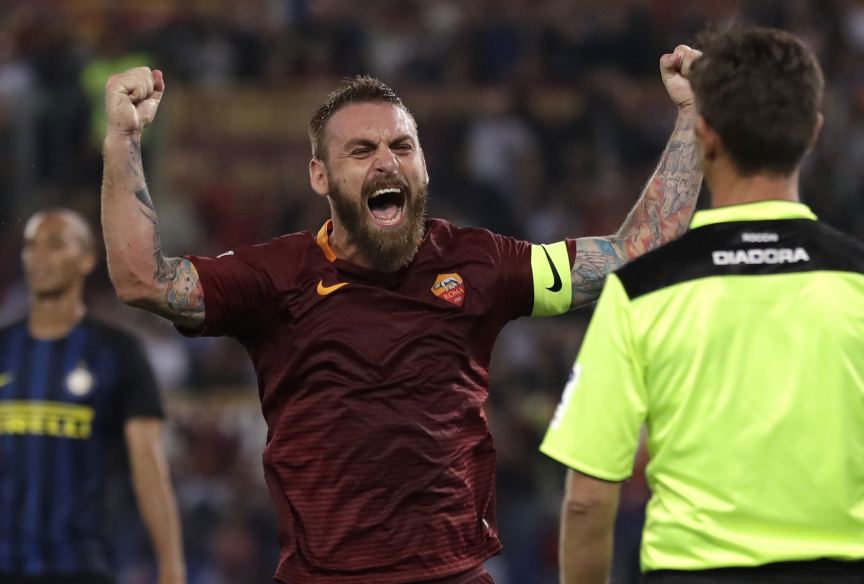 De Rossi's contract expires at the end of the season and, while a director's role was offered to him, the 35-year-old midfielder believes he still has much to contribute on the field.

De Rossi held a news conference on Tuesday after Roma surprisingly announced he would leave at the end of the season after 18 years at the capital club.

"I've tried to prepare myself mentally. I knew I wouldn't be happy even if it had been my decision," De Rossi said before adding with a laugh: "Maybe I imagined myself covered in bandages and practically crippled and saying, 'OK it's time to stop,' and the club begging me to stay."

All the Roma players were sat in the front rows at the news conference, wearing team jerseys with his name on the back. Forward Edin Dzeko led a standing ovation at the end and De Rossi embraced each of his soon-to-be-former teammates.

The decision not to renew his contract was confirmed to him only on Monday but De Rossi said he had been expecting it for some time.

"They told me yesterday but I'm nearly 36 and I'm not stupid, I'd understood," said De Rossi, who at times appeared to be struggling to hold back tears. "If no one calls you for 10 months, that's the direction they're going in.

However, he has struggled with injury this season and made only 17 league appearances.

"I really felt like I could continue for one or two years but the club decided like this and I have to respect that," De Rossi said. "But I feel like a footballer, I felt like a footballer all this year even if I had injury problems, I still want to play football. I would be doing myself wrong if I stopped like this.

"The club is there to decide who should play and who shouldn't. We could debate for hours on how much I could have been important even making five, 10 appearances and in the dressing room because I think I'm important for them — I can't look at them (the players) otherwise I'll burst into tears — but at some point someone has to put a stop."

Roma president James Pallotta said De Rossi would be welcomed back "in a new role whenever he wants."

De Rossi also made 117 appearances for Italy, scoring 21 goals, and won the 2006 World Cup. He retired from international football after the playoff defeat to Sweden which meant Italy failed to qualify for the 2018 tournament.

He is expected to play abroad following his final two upcoming matches with Roma at Sassuolo and at home against Parma.

"Regarding possible teams, I've heard a few things but I didn't want to look or ask anyone anything," he said. "I got 500 messages this morning. I'll check later and see if there's any offer but I don't have any particular direction.

"Finding a team is something that's so new for me that I have to talk at home, with my family, with my agent, with myself."