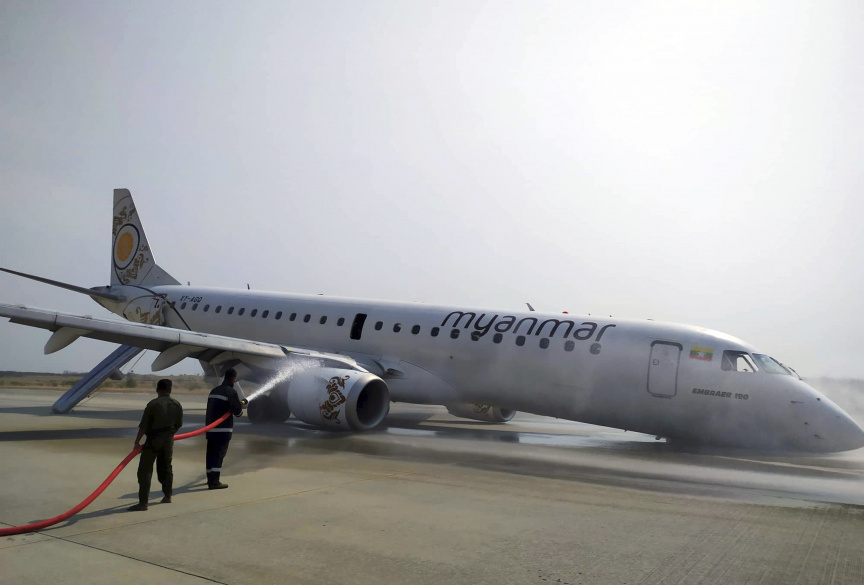 Firefighters work with hose on a plane of Myanmar National Airline (MNA) after an accident at Mandalay International airport Sunday, May 12, 2019, in Mandalay, Myanmar. (Aung Thura via AP)

YANGON, Myanmar (AP) — A Myanmar National Airlines plane made an emergency landing at Mandalay International Airport on Sunday, using only its rear wheels after the front landing gear failed to deploy.

All 82 passengers and seven crew members aboard Flight UB103 from Yangon were declared safe after the Brazilian-made Embraer 190-LR touched down on its rear sets of wheels before the plane's nose tilted down to scrape the runway, sending off a shower of sparks as it slowed to a stop.

Kyaw San, a spokesman for the airport, said the pilot informed the control tower before landing that he was unable to pull down the nose wheels.

A statement on the airline's Facebook page explained that the plane's EICAS — Engine Indicating and Crew Alerting System — indicated a failure of the front landing gear to deploy. The pilot tried a backup emergency procedure to pull down the wheels but that was unsuccessful. The aircraft did two fly-bys past the tower for air controllers to check visually whether the wheels had deployed.

The captain followed emergency procedures to dump fuel to reduce the landing weight, and made a safe landing at 9:09 a.m., said the statement.

Flight operations at the airport were temporarily suspended, and allowed to resume after about 2 ½ hours for smaller aircraft. The runways were expected to be reopened for use by larger Boeing and Airbus aircraft by late afternoon.

On Wednesday, a Biman Bangladesh Airlines aircraft skidded off the runway after landing in bad weather at Yangon's airport, injuring at least 15 passengers and crew but none critically. The fuselage of the plane, a Bombardier Dash 8, was broken in at least two spots, along with the wings.

North Korea demands return of cargo ship seized by US