City beats United 2-0, back on top of Premier League 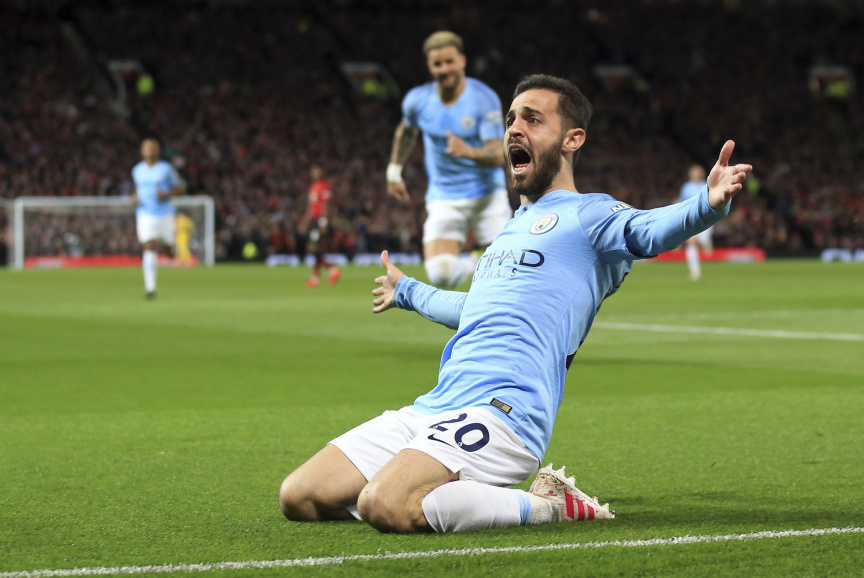 MANCHESTER, England (AP) — Manchester City is closing in on another Premier League title. Manchester United is increasingly unlikely to even make the top four.

In a derby match that highlighted the chasm that has formed between the two fierce rivals, City kept the destination of the title in its own hands by winning 2-0 thanks to goals by Bernardo Silva and substitute Leroy Sane at Old Trafford on Wednesday.

An 11th straight victory in the league moved City one point above Liverpool with three games left this season in its bid to become the first team to retain the trophy since United in 2009.

United slumped to a seventh loss in its last nine matches under Ole Gunnar Solskjaer. After losing 4-0 at Everton on Sunday, questions had been asked about the attitude and desire of United's players and Solskjaer got a reaction in that respect.

"There is a difference in quality — that is why they are top and we are where we are," said Solskjaer, whose team hasn't scored a goal in open play in 572 minutes. "They have set the standard. Living in Manchester, we cannot be happy with that. It is up to us to close that gap and overtake them."

That is unlikely to happen any time soon.

Pep Guardiola's side cannot reach the milestone of 100 points like last season but it continues to break records. Sane's 66th-minute strike meant City has 157 goals in all competitions for the season, beating the English record for a single top-flight campaign that the team held from the pre-Guardiola era in 2013-14.

"It's in our hands," Guardiola said, "but Liverpool is not going to lose points."

A week after letting a shot from Lionel Messi slip through his fingers in a heavy Champions League loss to Barcelona, United goalkeeper David De Gea was partially at fault for both goals against City.

Bernardo Silva received a short pass, cut inside from the right and shot just inside De Gea's near post in the 54th minute, with the goalkeeper slow to get down to his left.

De Gea then failed to keep out with his legs a low shot from Sane at the end of sweeping counterattack led by Raheem Sterling.

"He has high standards," Solskjaer said. "When we are having a time like this, we need to stick together, batten the hatches down and keep working. We have to come back fighting on Sunday."

That's when United plays Chelsea and its hopes of qualifying for next season's Champions League could be extinguished.

In the four-team fight for the top-four finish, United stayed in sixth place, two points behind Arsenal, three behind Chelsea and six adrift of third-place Tottenham. On another grim night, United can at least take solace from Arsenal's 3-1 loss at Wolves on Wednesday.

There was plenty of pre-match talk about United fans being in a quandary over who to support in this derby, with Liverpool — historically its biggest rival — set to benefit from any slip-up from City.

But there was no doubting who the home supporters inside Old Trafford were behind, with every tackle and attack by United vociferously cheered.

There was early danger for City, too, as captain Vincent Kompany struggled to deal with United's counterattacks and got booked after 10 minutes for blocking off Marcus Rashford. Jesse Lingard then volleyed wide off Paul Pogba's deep pass.

Solskjaer had begun the match with a five-man defense — Matteo Darmian was making his first start under the Norwegian in an unfamiliar center-back role — and it quickly became a case of United soaking up City's attacks and attempting to hit on the break.

Only in the final few minutes of the first half did City find some rhythm and Sterling missed the first great chance when he got on the end of a passing move, drifted past Chris Smalling and shot weakly at De Gea.

Fernandinho was forced off with a leg injury early in the second half, seemingly picked up after tackling Pogba, and that brought Bernardo Silva into a central role as winger Leroy Sane came on as a substitute.

Moments later, Bernardo collected a pass from Ilkay Gundogan, drifted inside and took an early shot that crept inside the near post.

If De Gea was perhaps culpable for that goal, he certainly could have done much better for Sane's 66th-minute effort that was powerfully struck but virtually straight at the Spain goalkeeper. The ball glanced off De Gea's legs and into the back of the net.

City has bounced back from its agonizing Champions League elimination by Tottenham last week with successive wins over Spurs and United, taking the team's run of league victories to 11.

"I think that is the most incredible detail for these players," Guardiola said. "You cannot imagine how tough it was to go out of this beautiful competition.

"To stay alive in the Premier League ... under the pressure we felt and how we reacted, that is perhaps more important than anything else."

Arsenal's away woes continue in 3-1 loss to Wolves