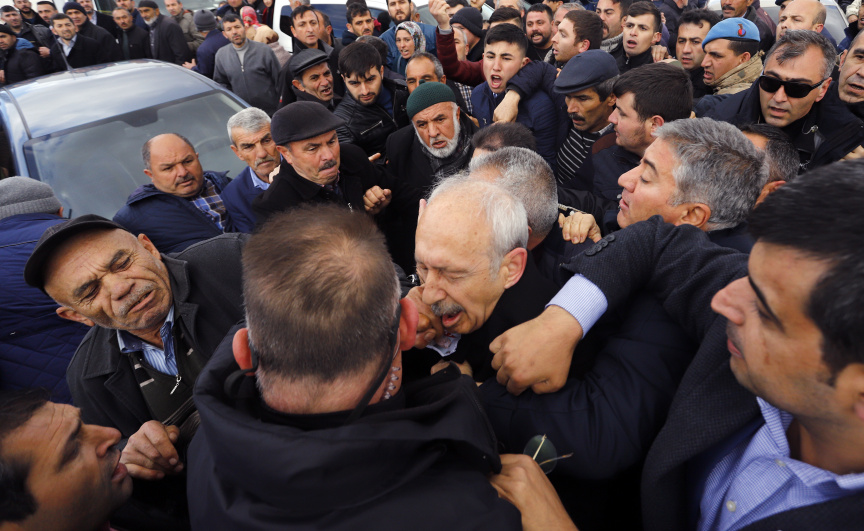 A man punches Kemal Kilicdaroglu, the leader of Turkey's main opposition Republican People's Party, during the funeral of a soldier who was slain during clashes with Kurdish rebels at Iraq border, outside Ankara, Turkey, Sunday, April 21, 2019. (DHA via AP)

ANKARA, Turkey (AP) — Protesters assaulted the leader of Turkey's main opposition party during a funeral held Sunday for a soldier who was slain during clashes with Kurdish rebels. The politician was not hurt, party officials said.

People threw punches at Republican People's Party leader Kemal Kilicdaroglu as security officials tried to escort him away from the funeral in a village outside of Ankara, television footage showed. An angry crowd then surrounded a house where he was taken for safety.

Kilicdaroglu was later driven out of the village in an armored vehicle.

The soldier was among four killed Saturday in a clash against the rebels of the outlawed Kurdistan Workers' Party rebels, or PKK, near Turkey's border with Iraq. The group is considered a terror organization by Turkey, the United States and the European Union.

The Ankara governor's office said legal action had been launched against the assailants.

Erdogan led the Justice and Development party's divisive election campaign, portraying the local races as a matter of national survival and equating opposition parties with terrorists.

The funeral assault cast a shadow on a rally organized in Istanbul to celebrate the CHP mayoral candidate's win, which ended the ruling party's and its Islamist predecessor's 25-year hold on the city of 15 million.

Ekrem Imamoglu, 48, was confirmed as mayor on Wednesday following two weeks of appeals and recounts requested by the ruling party. He has taken a conciliatory tone, promising to bring people together following the polarizing elections.

New Zealand, France to call for an end to online terror