Ajax rebuffs Champions League elite on and off the field 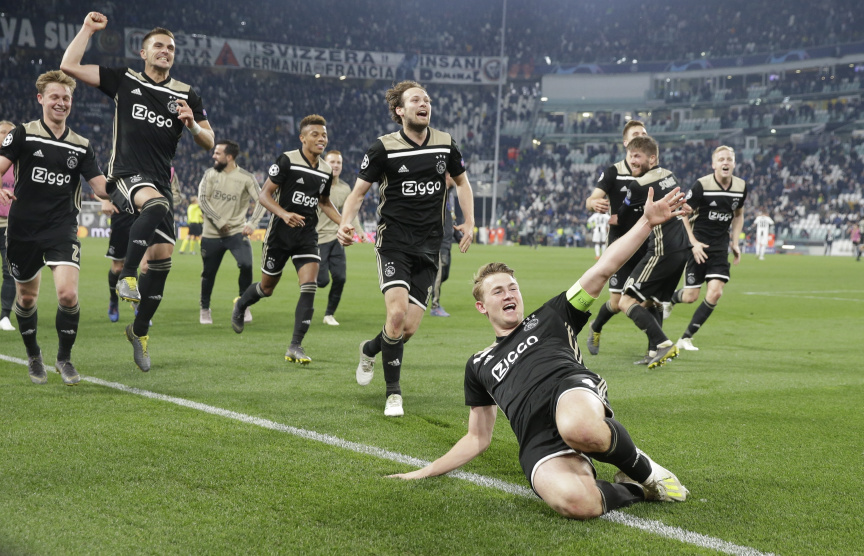 Ajax's Matthijs de Ligt and teammates celebrate at the end of the Champions League, quarterfinal, second leg soccer match between Juventus and Ajax, at the Allianz stadium in Turin, Italy, Tuesday, April 16, 2019. Ajax won 2-1 and advances to the semifinal on a 3-2 aggregate. (AP Photo/Luca Bruno)

GENEVA (AP) — By taking down two of the biggest names in soccer, Ajax thumbed its nose to the money behind them.

The Dutch team's astonishing run to the Champions League semifinals, outplaying both Real Madrid and Juventus in their home stadiums, has transformed Ajax from just another once-great club to the hero of the have-less.

"We want to have these surprises every year," said Lars-Christer Olsson, the chairman of the European Leagues group, which fears a widening wealth gap among clubs will hurt competitive balance on the continent.

Ajax's run started in the preliminary rounds last July and now includes knockout wins over two of the richest and most influential teams in world soccer.

Officials from those two storied clubs — Juventus president Andrea Agnelli and Madrid vice chairman Pedro Lopez — also lead the European Club Association, a group that is an aggressive negotiator in ongoing UEFA-led talks shaping the future of the Champions League.

That future, many believe, will be skewed toward the rich and entitled clubs by making it even harder for those from smaller countries to qualify for the 32-team group stage. It could also alter how an expected $3 billion prize money fund is shared. The changes should be agreed to next year and will take effect in the 2024-25 season.

UEFA has already begun consulting with the ECA, and will host the European Leagues group on May 8 at the governing body's lakeside headquarters in Nyon, Switzerland.

The ECA represents more than 230 members, including Ajax, but the bigger clubs have more say in strategy. They seemingly want to create a more closed-shop Champions League that would inevitably benefit teams from the richest leagues and biggest television markets, leaving a midranking nation like the Netherlands vulnerable.

The European Leagues group hopes to counter that thinking by valuing merit over reputation.

"We need to be brave and build the international competitions on the latest results in the domestic ones to feed the entire club football pyramid," Olsson said.

Meanwhile, Dutch league clubs have led the way in agreeing to share some wealth. From next season, clubs will give 5% of their prize money from the Champions League and Europa League group stages to league rivals who did not qualify.

Ajax has long been beloved across Europe for exciting teams of young, homegrown and skillfully scouted players. The latest generation is on track to emulate the early 1970s and mid-1990s teams and potentially shape the Champions League talks.

The current format was already a tough enough challenge after Ajax finished second in the Dutch league and had to go through three qualifying rounds. That meant starting before the domestic season kicked off, rather than in the group stage in September when the big leagues join.

The road to facing Madrid, Juventus and next Tottenham started against Sturm Graz, the second-best team from Austria. Still, 53,000 fans were at the Johan Cruyff Arena, the stadium named after Ajax's greatest player.

That route might be shut in future with no sure places for runners-up from leagues ranked outside Europe's top 10.

"A champion will always be able to participate," Agnelli said of the Champions League's likely shape in five years' time.

Yet Ajax is not a national champion, and nor was Monaco when launching Kylian Mbappe's career as another feel-good semifinalist in 2017 from the preliminary rounds.

The last major Champions League negotiations in 2016 ended badly for other midranking leagues, such as Switzerland and Turkey.

At that time, the big four leagues of Spain, England, Germany and Italy each got a fourth direct place in the 32-team group stage, ensuring more money for them at the expense of European soccer's smaller nations.

The relatively secret deal was criticized by soon-to-be UEFA president Aleksander Ceferin, who said the "ideal model" for Champions League qualification was the existing one. Back then, fourth-place teams in the big four leagues had to qualify in a playoff round, where Italian teams typically struggled.

So Ajax, in a tight title race with PSV Eindhoven, will be back in the qualifying rounds next season unless it wins this Champions League because even the Dutch league winner does not get direct entry into the group stage.

Another and more recent Super League threat came in a Football Leaks report in November.

German magazine Der Spiegel published confidential documents revealing a Super League project linked to Real Madrid. The proposed 16-team lineup had AC Milan — which has not qualified for the Champions League in five years — among 11 founding members who could not be relegated. The five invited clubs included Marseille, which failed even to reach the knockout rounds of the Europa League this season.

There was no place for Ajax.