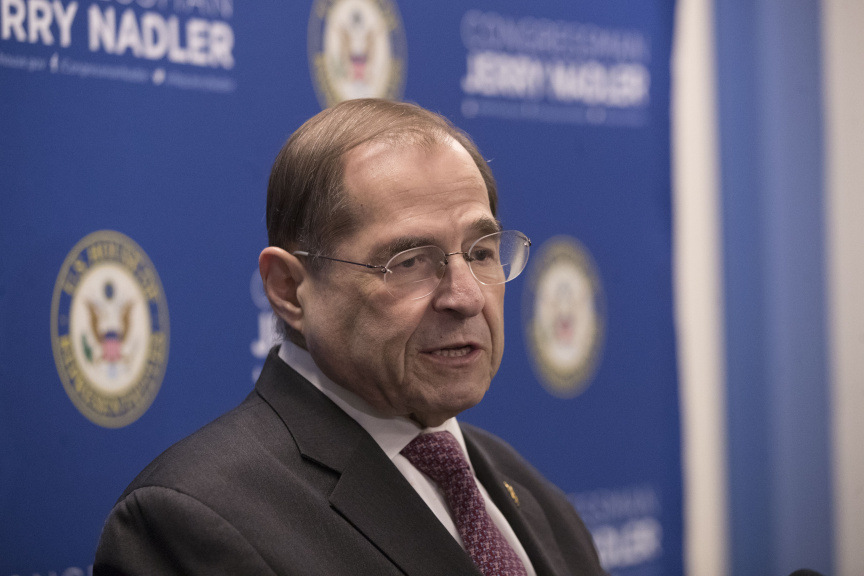 House Speaker Nancy Pelosi has insisted on a methodical, step-by-step approach to the House's oversight of the Trump administration, and she refuses to consider impeachment without public support, including from Republicans, which seems unlikely. But in light of Mueller's findings , Democratic leaders are under mounting pressure from the party's rising stars, deep-pocketed donors and even a presidential contender to seize the moment as a jumping-off point for trying to remove Trump from office.

Speaking Friday in Belfast as Pelosi wrapped up a congressional visit to Ireland, she declined to signal action beyond Congress' role as a check and balance for the White House.

"Let me assure you that whatever the issue and challenge we face, the Congress of the United States will honor its oath of office to protect and defend the Constitution of the United States to protect our democracy," she told reporters. "We believe that the first article — Article 1, the legislative branch — has the responsibility of oversight of our democracy, and we will exercise that."

That approach isn't enough for some liberals who see in Trump's actions not just a president unfit for office but evidence of obstruction serious enough that Mueller said he could not declare Trump exonerated.

Rep. Alexandria Ocasio-Cortez, D-N.Y., is now signed on to an impeachment resolution from fellow Democratic Rep. Rashida Tlaib of Michigan, bringing new energy to the effort. Sen. Elizabeth Warren, D-Mass., a presidential candidate, said Friday the House "should initiate impeachment proceedings against the president." And billionaire Tom Steyer, a leading advocate of impeachment, has grown impatient with the House's pace of investigations and wants televised hearings to focus Americans' attention on Trump.

"Let's get the show on the road," Steyer said in an interview Friday. "The Mueller report very clearly outlined obstruction by the president and basically said, I can't do anything about it, it's up to Congress to hold the president accountable."

Democrats, though, may see greater power in pursuing an investigative effort, leaving impeachment on the shelf as a break-glass option.

The Judiciary chairman, Nadler, D-N.Y., says he expects the Justice Department to comply with the committee's subpoena for the full report by May 1.

That's the same day Attorney General William Barr is to testify before a Senate committee and one day before Barr is to appear before Nadler's panel. Nadler also has summoned Mueller to testify by May 23.

"It now falls to Congress to determine the full scope of that alleged misconduct and to decide what steps we must take going forward," Nadler said.

Nadler said he was open to working with the department on accommodations, but he also said the committee "needs and is entitled to the full version of the report and the underlying evidence consistent with past practice."

But the committee's top Republican, Rep. Doug Collins of Georgia, said the subpoena was "wildly overbroad" and that Trump already had declined to assert executive privilege over the Mueller report in a move of "unprecedented openness."

"This is politically convenient," Collins said, allowing the chairman "to grandstand and rail against the attorney general for not cooperating on an impossible timeline."

For Congress, though, organizing an immediate response been complicated by the spring recess that left leadership in both parties away from Washington and rank-and-file lawmakers.

GOP Leader Kevin McCarthy has been on a delegation trip to South America, and GOP Sen. Lindsey Graham, the top Republican on the Senate Judiciary Committee, has been in Africa.

One Republican, Sen. Mitt Romney of Utah was one of the few who spoke out Friday, saying he was "sickened" by the report's findings of dishonesty at the highest levels of the administration, "including the president," and appalled that some Americans were working with Russians during the 2016 election.

Pelosi will convene House Democrats for a conference call Monday, after the holiday weekend when many lawmakers are celebrating Easter and Passover.

With Barr, Democrats expect a long battle ahead. The attorney general has come under intense scrutiny over his handling of the Mueller report and subsequent comments that have left him exposed to criticism he is acting in Trump's interest.

Late Friday Democrats rejected an offer from Barr for a limited number of congressional leaders to view some of the redacted materials in a confidential setting. They said it was inadequate.

It's unlikely that the full Mueller report or the special counsel's public testimony will untangle the dilemma that Democrats face. Mueller laid out multiple episodes in which Trump directed others to influence or curtail the Russia investigation after the special counsel's appointment in May 2017, and Trump made clear that he viewed the probe as a potential mortal blow — "the end of my presidency."

Democratic leaders are walking a delicate line on what to do with Mueller's findings.

The No. 2 Democrat, Rep. Steny Hoyer of Maryland, drew criticism for refusing to consider impeachment, and quickly revised his comments to say "all options ought to remain on the table."

And Pelosi, in an interview last week, before the report's release, reiterated her "high bar" for impeachment. But she also didn't close the door on the option.

"The fact is the president has engaged in activities that are unethical, un-American. ... In every way he is unfit to be president of the United States. Does that make it — is that an impeachable offense? Well it depends on what we see in the report."

Hurricane Michael gets an upgrade to rare Category 5