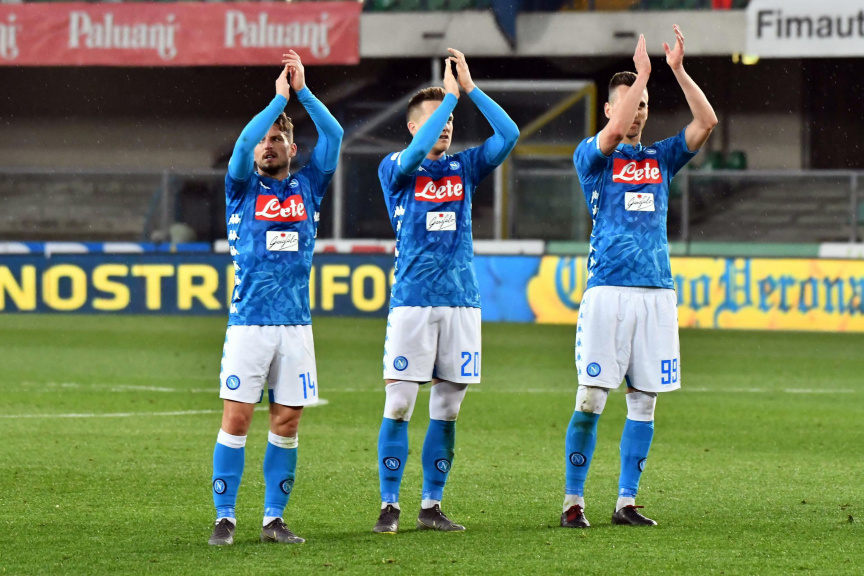 Napoli's players from left, Dries Mertens, Piotr Zielinski, and Arkadiusz Milik clap their hands at the end of a Serie A soccer match between Chievo Verona and Napoli, at the Bentegodi stadium in Verona, Italy, Sunday, April 14, 2019. Chievo lost 1-3. (Paolo Magni/ANSA via AP)

ROME (AP) — Napoli avoided handing Juventus the Serie A title and also relegated Chievo Verona to the second division with a 3-1 victory over the last-placed club on Sunday.

Carlo Ancelotti's team needed three points to prevent the Bianconeri from celebrating the title, and they achieved this following a brace from Kalidou Koulibaly and a goal from Arkadiusz Milik.

The victory ended a three-match winless streak for Napoli — including a 2-0 loss to Arsenal in the first leg of the Europa League quarterfinals.

"This win takes some of the weight off our shoulders," Ancelotti said. "We were tense and worried. After Milik's goal, we loosened up a bit and that's a helpful boost."

Still, Juventus is 17 points ahead of Napoli with six rounds remaining and can clinch a record-extending eighth straight title next weekend with a draw against Fiorentina.

Chievo was mathematically assured of going down to the second division. The Verona club has won only once this season and was also given a three-point penalty for false accounting.

Koulibaly didn't even need to jump to head in a cross from Dries Mertens after a quarter-hour for his first Italian league goal of the season.

Milik then curled a long shot in after the hour mark, his sixth from beyond the area this season — top in Serie A.

Koulibaly's second was a half-volley following a rebound.

Bostjan Cesar pulled one back for Chievo near the final whistle with a header.

On Thursday, Napoli will attempt to overturn the 2-0 deficit against Arsenal in the return leg of the Europa League quarterfinals.

Inter Milan tightened its hold on third place with a 3-1 win at relegation-threatened Frosinone.

Radja Nainggolan opened the scoring, and Ivan Perisic and Matias Vecino also found the target for the visitors.

Francesco Cassata scored for Frosinone to temporarily make it 2-1.

Inter is five points ahead of fourth-placed AC Milan.

Torino's chances of sneaking into the Champions League were hampered by a 1-1 draw against Cagliari, in a match which saw three players sent off.

Simone Zaza was both hero and villain for Torino as he gave it the lead shortly after halftime but was then shown a straight red card in the 73rd minute for dissent.

Cagliari immediately made the most of the numerical advantage as Leonardo Pavoletti headed in the equalizer. There were suspicions of offside but the goal was awarded after a lengthy video review.

Vincenzo Montella's return to the Fiorentina bench ended in disappointment as his team was held to a 0-0 draw at home to relegation-threatened Bologna.

Luis Muriel hit the post late on but Fiorentina extended its winless streak to nine matches.

It was Quagliarella's 22nd goal of the season, moving him one above Milan forward Krzysztof Piatek at the top of the scoring charts.

Also Sassuolo drew 0-0 against Parma, which had a penalty saved.