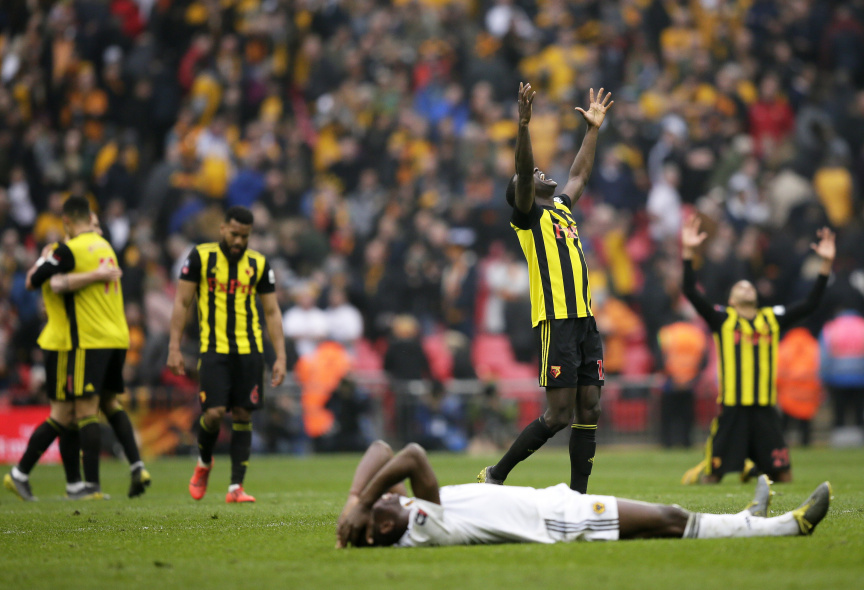 LONDON (AP) — Gerard Deulofeu was watching from the Watford bench when Raul Jimenez followed up scoring Wolverhampton's second goal with a pre-planned celebration.

A Wolves-themed mask, gifted from WWE wrestler Sin Cara, was retrieved from behind the Wembley goal and the showboating striker placed it over his face.

By the end of the FA Cup semifinal on Sunday, when Wolves capitulated to lose 3-2 and send Watford into its first final in 35 years, Jimenez could have done with the gold-and-black mask back to hide the pain.

Jimenez's bravado — even with Wolves holding a 2-0 lead after 62 minutes thanks to Matt Doherty's first-half strike — had proved far too premature.

Deulofeu made sure of that after being brought off the bench in the 66th minute by manager Javi Gracia.

"He knows I am angry because I was playing all season," Deulofeu said. "What I have to do is what I did this afternoon."

Starting with an audacious goal in the 79th minute.

Spurning a chance to chase down a clearance from Romain Saiss, Jimenez allowed the ball to roll to Deulofeu, who dinked a shot that bent around goalkeeper John Ruddy.

After a goal relying on ingenuity came an equalizer that was due to Troy Deeney's nerves of steel. With the game in stoppage time, Deeney was softly tripped by Leander Dendoncker and slammed the resulting penalty into the net to send the semifinal into extra time.

"It shows the character of this team," Deeney said. "We don't give up."

Deulofeu, who twice failed to carve out a career at Barcelona, certainly doesn't.

The Spaniard twice exchanged passes with Andre Gray and sprinted past Conor Coady before completing a counterattack by putting the ball under goalkeeper John Ruddy in the 104th minute.

"Coming from teams like Barcelona (and AC) Milan, they play a different style than Watford," said Deulofeu, who was substituted in the 112th minute. "But I have to adapt myself to those characteristics and that's what I did and what I'm doing now."

Watford has a May 18 return trip to Wembley to face Manchester City in the final.

"This team has something special," Deeney said. "We're not the most talented. We're not all that. But the hard work and desire at 2-0 down, many teams would've called it a day but we kept fighting and kept going and brought the little man on, who produced a bit of magic.

"We've got room to grow, there's not a ceiling on us yet ... For a club of this size, let's enjoy this moment."

Watford, which lost the 1984 final to Everton on a day that then-owner Elton John was pictured in tears, now has another shot at a first major trophy next month.

"We are going to come and have a go," Deeney said. "There is such belief in each other and what we are doing."

Wolves can only despair, missing out on a first final in the competition since 1960, when it beat Blackburn.

"It's a tough moment of real pain and disappointment," Wolves manager Nuno Espirito Santo said. "The feeling is we had it. It went away from us. We have to look at it. We have to realize in the last minute of the game we should manage better."

In the day's only Premier League game, Arsenal missed a chance to strengthen its chances of Champions League qualification when it lost 1-0 at Everton.

At 36 years, 233 days, Phil Jagielka became the oldest scorer in the Premier League this season when he netted from close range in the 10th minute at Goodison Park.

The center back was a late replacement for the ill Michael Keane to make only his fourth appearance of the season. It was Jagielka's first goal in almost two years.

A first league defeat in two months for Arsenal leaves fourth place vulnerable to Chelsea, with the London clubs level on points with six games remaining. Chelsea hosts West Ham on Monday. Tottenham is a point ahead of Arsenal in third place.

"It is a bad result, not a good performance," Arsenal manager Unai Emery said. "But we are fourth."