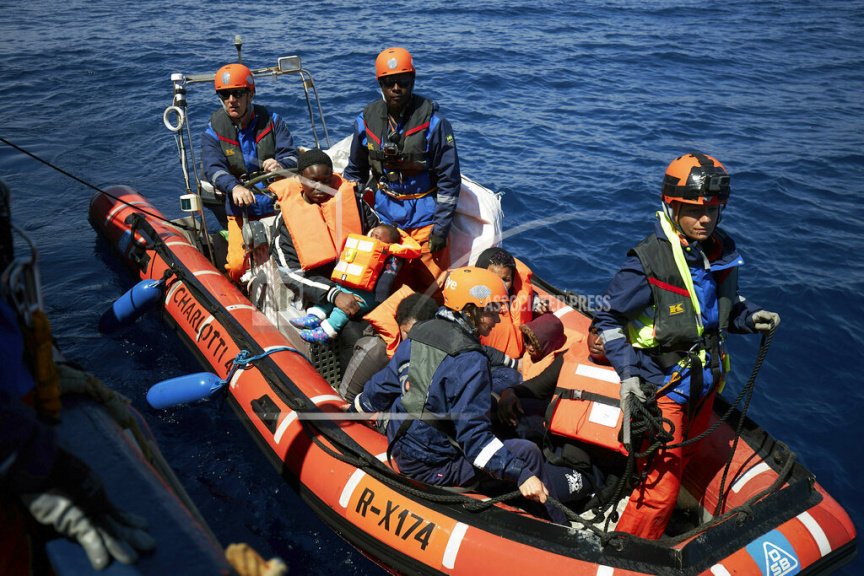 This April 3, 2019 photo shows migrants on a rubber dinghy rescued by the Sea-Eye rescue ship in the waters off Libya. The humanitarian ship Sea-Eye with 64 rescued migrants aboard was stuck at sea on Thursday as Italy and Malta refuse it safe harbor as their refusal set the stage for another Mediterranean standoff that can only be resolved if European governments agree to accept the asylum-seekers. (Fabian Heinz/Sea-eye.org via AP)

ROME (AP) — A humanitarian aid ship carrying 64 rescued migrants was stuck in the Mediterranean Sea on Thursday as both Italy and Malta refused it safe harbor, leaving the migrants sleeping in cramped conditions on deck as a storm approached.

Their refusal sets the stage for another Mediterranean migrant standoff that can only be resolved if some European Union members agree to accept the asylum-seekers.

Carlotta Weibl, spokeswoman for the German humanitarian organization Sea-Eye, said the ship was near the Italian island of Lampedusa on Thursday.

"We have no idea yet where we can disembark," Weibl told The Associated Press. "Malta says we can't enter their waters and we are unlikely to get permission from Italy."

Sea-Eye's ship, the Alan Kurdi, rescued the migrants Wednesday near Libya after Libyan authorities could not be reached. It did so as it was looking for another smuggling boat with 50 migrants that has been missing since Monday and 40 other migrants missing at sea since last week.

"The chances are low that they are alive," Weibl said.

The 64 migrants picked up included an infant and a child, the group said. But Weibl said the ship is far too small for so many people and that people were sleeping outdoors on deck as it began to rain.

Matteo Salvini, Italy's hard-line interior minister, said that his ministry sent a formal letter on Thursday to the German government telling them the ship cannot dock in Italy and asking them to intervene. He said he also delivered that message in person to a German government minister at a G-7 meeting in France.

He said that "since the ship is German, with a German flag and a German crew ... let them solve the problem."

He repeated his assertion that the ship should be allowed to dock in Hamburg.

Weibl said that suggestion was ridiculous. The German city of Hamburg is not even located on the Mediterranean Sea but on a river leading to the North Sea.

"It's a journey of three to four weeks (to Hamburg). We don't have food and water, so it's completely out of the question," she said.

Similar standoffs in recent months involving rescue ships hoping to reach Italy and Malta were eventually resolved when other EU members agreed to take some of the migrants.

However, many of those people remain stuck in migrant centers in Malta and Italy.

The Alan Kurdi ship is named after a 3-year-old Kurdish boy who drowned in the sea in 2015 as he and his family fled war in Syria. The image of his small, lifeless body washed ashore prompted an outpouring of sympathy for the plight of migrants.

Weibl said the Alan Kurdi is currently the only humanitarian ship operating in the Mediterranean because many governments have denied aid ships permission to operate.

This story has been corrected to reflect that there was one child, not five children, among the 64 rescued people.

EU struggles to cut off its reliance on Russia gas