Allegri: Juventus will not risk Ronaldo against Ajax 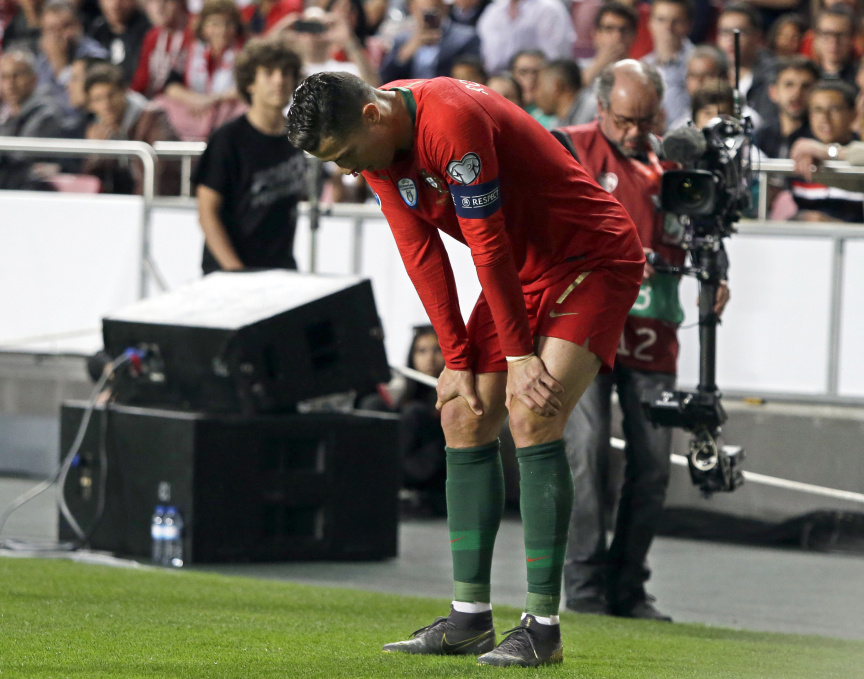 In this Monday, March 25, 2019 file photo, Portugal's Cristiano Ronaldo reacts during the Euro 2020 group B qualifying soccer match between Portugal and Serbia at the Luz stadium in Lisbon, Portugal. (AP Photo/Armando Franca, FILE )

TURIN, Italy (AP) — Cristiano Ronaldo will not be risked for Juventus' first match of the Champions League quarterfinals against Ajax if he is not fully fit, coach Massimiliano Allegri said on Friday.

Ronaldo injured a right thigh muscle and limped off 30 minutes into Portugal's 1-1 draw against Serbia on Monday in qualifying for the 2020 European Championship.

"He will have tests on Monday, we'll evaluate things from there," Allegri said. "There is a risk — and a lot of risk — that he will miss the match against Ajax, he knows it, too, and he knows, too, that if he is not fit then he will stay out."

Juventus travels to Ajax for the first leg of the Champions League quarterfinals on April 10, then hosts the Dutch team the following week.

The 34-year-old Ronaldo told Portuguese media after Monday's international that he "should be back in one or two weeks."

"Ronaldo is fine, he started moving again yesterday a bit, but caution is needed because it's best to miss one match than the end of the season," Allegri said. "We are in a delicate phase; he will return when he is well and there will be no danger that he may have a relapse."

Ronaldo scored a hat trick against Atletico Madrid in the return leg of the last 16 as Juventus overturned a first-leg deficit.

"Juventus has the good fortune to have an in-depth squad," Juventus president Andrea Agnelli said. "Cristiano is the best player in the world, if you have him on the pitch he gives you an extra sense of security.

"That said, when you have muscle injuries you have to be very careful. For one match you risk compromising the next two months. ... It's more important to safeguard two and a half months than one match only."

Back with Barcelona, Messi thrives in latest Liga win