France investigates after older protester is injured in Nice 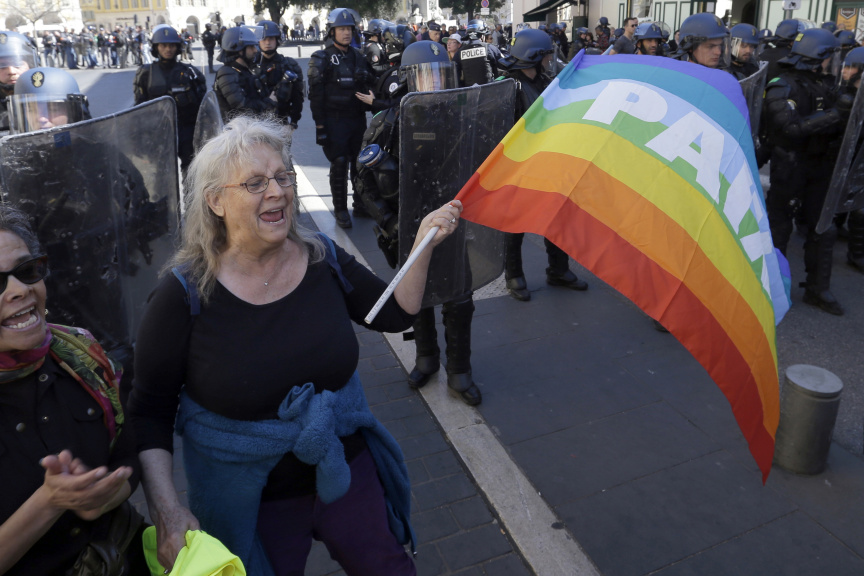 In this Saturday, March 23, 2019 file picture, anti-globalization activist Genevieve Legay, 73, demonstrates in front of riot police officers during a protest in Nice, southeastern France, as part of the 19th round of the yellow vests movement. (AP Photo/Claude Paris, File)

The woman was waving a rainbow flag marked "Peace" and holding a yellow vest when riot police carrying shields suddenly pushed toward the protesters Saturday. An Associated Press reporter saw her fall to the pavement, blood spilling from her head.

The official said Sunday that she is in intensive care, and cited the Nice prosecutor as saying an investigation was opened. The official was not authorized to be publicly named.

French authorities banned protests in several areas Saturday to prevent a repeat of that rioting that scarred Paris a week ago at yellow vest protests. Nice was under extra security because the city was preparing for the arrival of Chinese President Xi Jinping.

The 4-month-old movement drew bigger crowds Saturday than in recent weeks, despite heavy security and even though last weekend's violence dented overall support for the cause. The protesters want more help for struggling French workers and retirees and say President Emmanuel Macron favors the elite.

A police officer at the Paris protest suffered a heart problem, slumping to the ground before being hospitalized. Associated Press journalists at the scene saw no violence or incidents nearby when he collapsed.